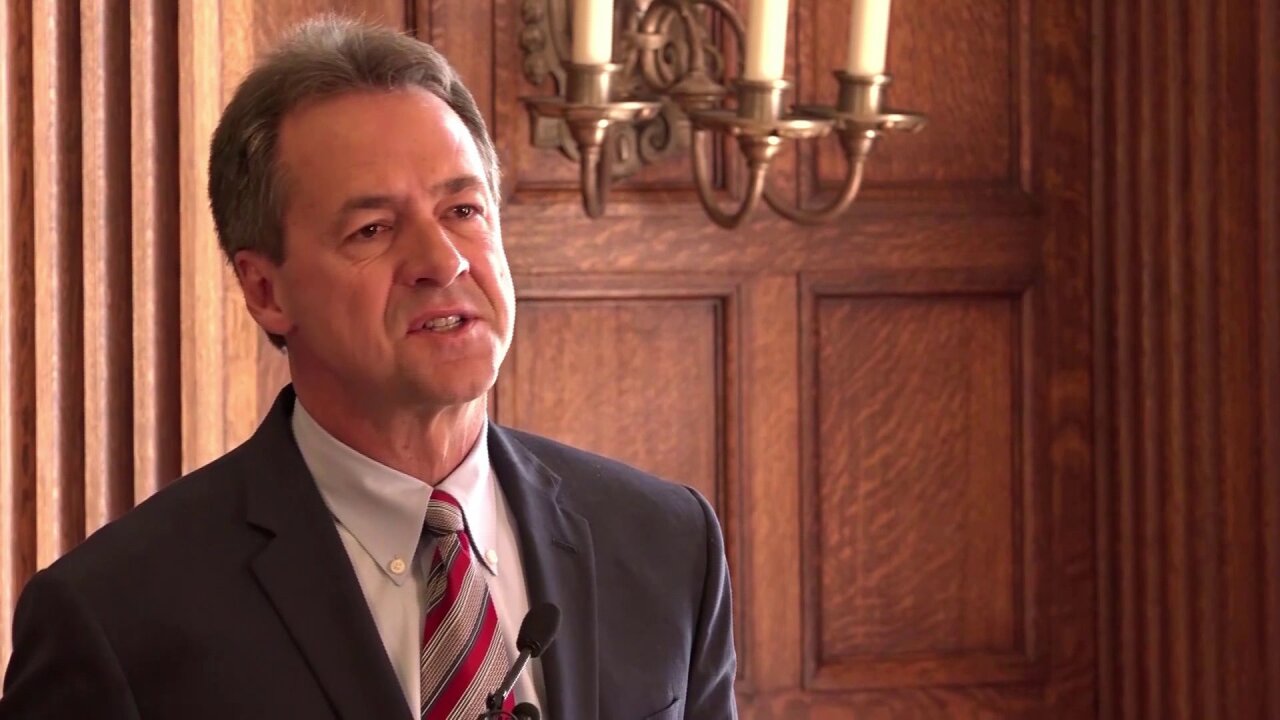 Montana Gov. Steve Bullock on Tuesday announced that he is running for president, becoming the 22nd Democrat to announce a bid to take on President Donald Trump in 2020.

In a video posted online, Bullock outlined a campaign to take on money in politics and push progressive policies from his red-state perspective. He plans to focus on his Montana roots and his ability to reach out to Republican voters.

Bullock’s video highlights that he won reelection in Montana in 2016 — the same year Trump won the state in the presidential election.

“To be honest, I never thought I’d be running for President,” Bullock said in the video, which also highlights his successful efforts to expand Medicaid, his support for gay marriage and his bipartisan effort to ban dark money from the state’s politics. “This is the fight of our time. This has been the fight of my career. I am Steve Bullock and I am running for President.”

The video nods to two overarching messages of Bullock’s campaign: delivering Americans the ability to live and work in any community and make a life that is better than their parents, and convincing Democrats that winning over Republicans — some of whom voted for Trump in 2016 — is possible.

Bullock, in a brief Monday interview with CNN ahead of his announcement, said he is “not so naive to say all voters will grab hands and walk through the fields together,” but he said it was incumbent on Democrats to convince voters in “places like a Montana or the Midwest” that “the Democratic party is fighting for their interests.”

He added: “I have the ability to do this. … There are a whole lot of voters, if they vote their economic interests, or their conservation interests or interests for the next generation, then they will come back to us.”

According to a campaign aide, Bullock will formally announce his 2020 run on Tuesday afternoon inside a science classroom at Helena High School, the same school he graduated from over three decades earlier.

After heading to New York for a string of interviews on Wednesday, Bullock will travel to Iowa, a state his campaign plans to make his primary focus. The governor has a powerful ally in the state: Iowa Attorney General Tom Miller, the only statewide elected Democrat in the state, who has been supportive of a Bullock run for months.

The Montana Democrat will face a number of issues in the presidential campaign: he’s largely unknown outside of the most animated Democratic activists, he isn’t currently registering in the polls that have included him, and he enters a historically massive field of Democrats who have months of headway on him.

Bullock’s late entry into the race — the governor opted to wait on an announcement until the Montana state legislature, which only meets every two years, had finished its session — means he will have to hurry to find 65,000 campaign donors and enough support in the polls to meet the Democratic National Committee’s threshold for the first two Democratic primary debates this summer.

“I get I am getting in later than some, but I am governor, I had a job to do,” Bullock told CNN, noting that he signed some of his final bills from the session on Monday morning.

“On the one hand, it may seem to put me at a disadvantage, but I will be out traveling, talking and listening. But all I can do is count on both the voters to tune in,” he said. “And as we look at this debate stage, I think that I am already qualified in two or three polls and would hope they are polling some in the next month and we will see.”

Bullock is a life-long Montanan, born in Missoula and raised by a single mom in Helena, the state’s capital.

In his announcement video, Bullock said that he only knew about the governor’s mansion as a kid because he delivered papers to the house.

“Now my wife Lisa and I are raising our kids in that same house,” he said.

After graduating from Helena High School, he attended Claremont McKenna College in California and later got a law degree from Columbia Law School in New York.

Bullock entered Montana politics quickly, working for the Montana secretary of state and later the state’s Department of Justice. He first ran for office in 2000, when he lost the Democratic primary for Montana attorney general. Bullock entered private practice after that loss — including a stint working in Washington, D.C. — before he ran, this time successfully, for attorney general in 2008.

After one term as attorney general, Bullock successfully ran to become Montana’s governor in 2012.

But it’s his 2016 run — in which the governor won reelection by 4% at the same time Trump won Montana by more than 20% — that will provide the newly minted 2020 candidate his most powerful talking point: the ability to win over voters who backed Trump in 2016.

“As a Democrat governor of a state Donald Trump won by 20 points, I don’t have the luxury of just talking to people who agree with me,” Bullock said in his announcement video.

Initially, Bullock plans to run a shoestring campaign based out of Helena. His campaign currently occupies half of a room in a building in the capital’s downtown where the campaign’s four total staffers work. The campaign is expected to add eight more staffers this week, including Megan Simpson as Bullock’s Iowa state director and Jeremy Busch as his Iowa press secretary.

Jenn Ridder, a longtime Democratic operative, will be Bullock’s campaign manager, and Galia Slayen, who formerly worked for Illinois Gov. JB Pritzker, will be his communications director.