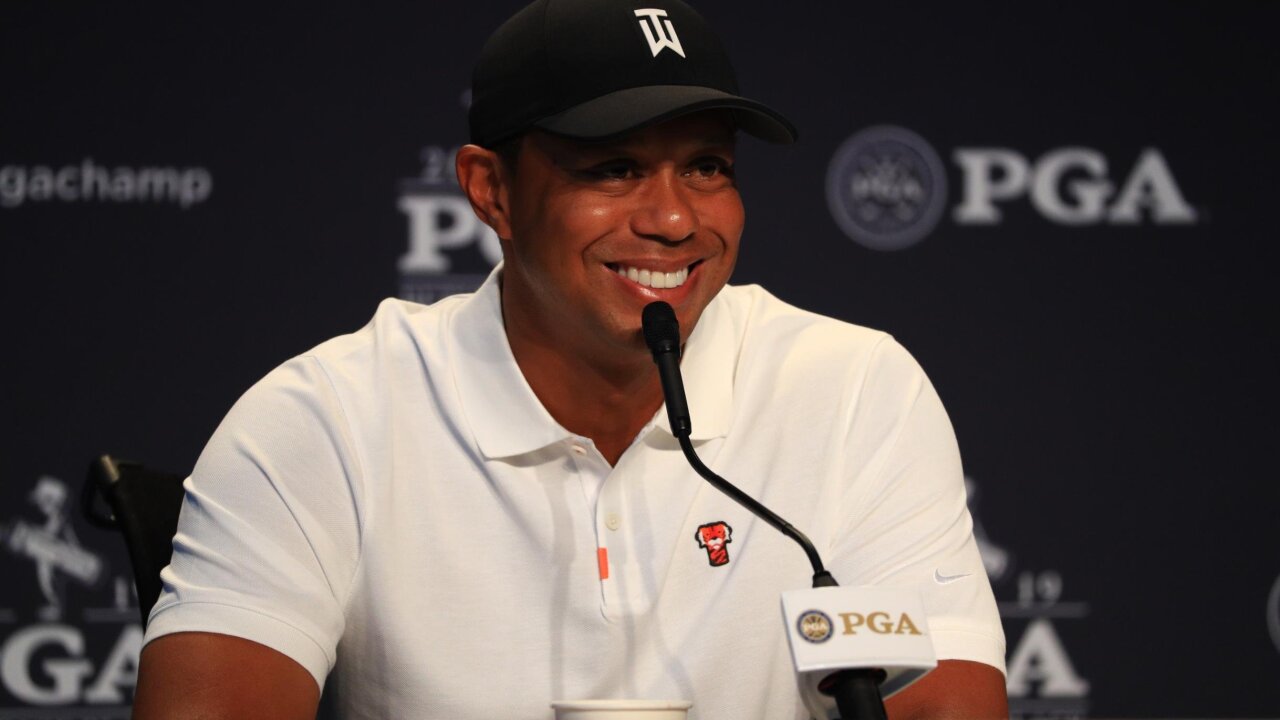 The 43-year-old is the betting favorite for the year’s second major at this week’s PGA Championship at Bethpage — moved from August to a new slot in May — after clinching his fifth Green Jacket and first major title for 11 years after overcoming career-threatening back injuries and personal issues.

Woods’ comeback has electrified the sport of golf again and reignited his pursuit of Jack Nicklaus’ record of 18 majors, and Bethpage’s infamous Black course is a venue he knows intimately after winning the 2002 US Open on the Long Island track.

“I wanted to play at Quail Hollow [in early May] but to be honest with you I wasn’t prepared to start the grind again, I wasn’t mentally ready to log the hours,” Woods told reporters at Bethpage Tuesday.

“Coming here is a different story.”

Two-time Masters champion Bubba Watson was one of a number of players who waited to congratulate Woods at Augusta and he told CNN’s Don Riddell it was “overwhelming” and “crazy to watch.”

“We were watching a great champion — he could be considered the greatest of all time — and even after all the stuff he’s went through and his body’s went through, he keeps proving it,” said Watson.

“It’s an amazing ride and to be a part of the field and also to be able to shake his hand and talk to him, it was pretty special.”

Woods hopes his 15th major title can have the same springboard effect as his second major, which came more than two years after his stunning breakthrough triumph at the 1997 Masters.

“It just helped keep the momentum growing,” said Woods, who recently visited the White House to receive the Presidential Medal of Honor from US President Donald Trump.

“It was a big moment to kick start what transpired.”

World No. 6 Woods insists he still has to manage his back after undergoing spinal fusion surgery in April 2017, and says some days he has “more range of motion” than others, meaning he spends more time on his short game than anything else.

Whether his Masters win paves the way for another period of dominance “remains to be seen,” says Woods, but he is firmly focused on contending again in the big events, including next year’s Olympics in Tokyo.

“Would I like to play in the Olympics? Yes,” he said. “That would be a first for me and certainly I would welcome it if I was part of the team.”

The last time Woods didn’t play between the year’s first two majors was in 2008 when he returned to win a remarkable US Open on what was later diagnosed as a broken leg.

And the last time he won the first two majors of the year — in 2002 — the courses were Augusta National and Bethpage Black. However, playing the Black in the cool, wetter conditions of May in a US PGA is a different story to the tight, fast set-up of a US Open in June.

“When we came here in 2002 this was one of the biggest ballparks you’ve ever seen and it’s got bigger,” he added.

“In order to win this one driving is going to be at the forefront with the rough as lush as it is.”

Watson insists the sports world will be glued to the next chapter of the Woods story this week, and says his return to the New York area as a major champion again will have the already boisterous crowds at fever pitch.

“The atmosphere alone, just being around Tiger and Tiger’s group is going to be overwhelming, the energy and the buzz that’s going to be up here,” added Watson. “It’s going to be a joy to be a part of. But you want to knock him off the pedestal.”

The Black was opened in 1936, as one of the now five public courses in Bethpage State Park on Long Island. Designed by noted architect A.W. Tillinghast, it long had a reputation as a formidable course, but by the early 1990s it had fallen into some disrepair.

David B. Fay, executive director of the United States Golf Association (USGA), had heard rumors of its greatness and knew the tales of golfers sleeping in their cars overnight to get a tee time.

Intrigued, he pulled in on a whim one November afternoon in 1994. Seeing beyond the fraying bunkers and poor condition of the course, he had his epiphany when he reached the tee of the tree-lined par-five fourth hole with its famous cross bunkers and elevated fairway on the other side.

“That’s when I knew,” Fay is quoted as saying in John Feinstein’s book “Open,” the story of how the US Open came to the Black.

There were myriad obstacles — “a million ifs” — in the way, but Fay drove away convinced the Black could be a US Open venue.

Fast-forward to 2002, and Bethpage Black became the first publicly owned and operated course to host the US Open.

Woods was the only player to break par for the tournament, winning the 102nd US Open by three shots from Phil Mickelson for his eight major title. Bethpage held the event again in 2009 when Lucas Glover won and has since held two PGA Tour events. It is also set to host the Ryder Cup in 2024.

While Woods’s tilt at a 16th major is the biggest story in town, other notable narratives could come to the fore. Jordan Spieth is making his third attempt at clinching the career grand slam of all four major titles.

Having won the Masters and US Open in 2015 and the Open in 2017, victory this week could elevate Spieth into the elite list of Gene Sarazen, Ben Hogan, Gary Player, Jack Nicklaus and Woods to have won golf’s big four events.

However, the 25-year-old hasn’t won since clinching the Open at Royal Birkdale and is in something of a slump having dropped to 39th in the world.

Then there’s Brooks Koepka, the world No.3, who is the defending champion and the winner of three of the last eight majors.

The powerful 29-year-old has become one of the most dominant players in the game, and was tied second behind Woods at Augusta, having held off the resurgent former world No.1 to triumph in the US PGA at Bellerive last August.

However, the last player to win back-to-back US PGA titles was back in 2007. His name? Tiger Woods.

“We all know what New York and Long Island is like,” he told reporters. “I think they’re planning on letting 60,000 in a day here this week, so it’ll be pretty loud.”

Should Woods win, with Johnson outside the top 10 and second-ranked Justin Rose and Koepka not second, he would return to No. 1 in the rankings for the first time since March 2013.

Woods will play the first two rounds with Koepka and British Open champion Francesco Molinari, the man he overcame to win at Augusta. They tee off at 8:24 a.m. EST Thursday.