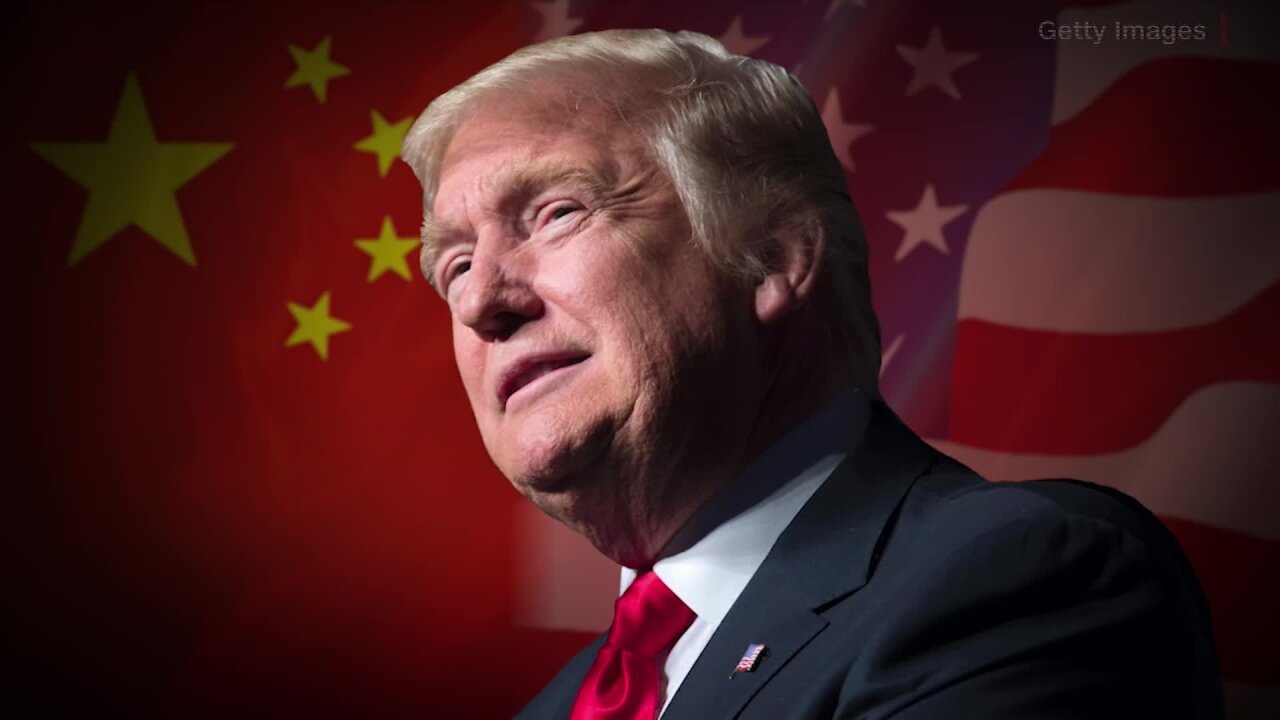 President Donald Trump is digging in on his renewed China trade war, warning Monday that the fight “will only get worse” if Beijing retaliates — just as Chinese officials announced a fresh set of tariffs on $60 billion of US exports.

In the halls of the Capitol these days, Republican lawmakers from Southern states aren’t exactly eager to talk about the President’s trade war with China.

Sen. Rand Paul of Kentucky didn’t have anything to say when approached by CNN on Tuesday. Asked if trade with China has been good for his state, Sen. Tim Scott of South Carolina said he didn’t know. Fellow South Carolinian Sen. Lindsey Graham said it was a good question and that he’d have to think about it. Sen. Ted Cruz of Texas just shrugged.

There’s a reason Southern Republicans are reluctant to talk about tariffs. As much as any region in the country, the South has benefited from free trade, which has helped boost demand for its agricultural goods and provided its factories with low-cost components to feed the region’s growing industrial base.

But those economic interests cut against the political preferences of the majority of voters in Southern states, where Trump enjoys some of his highest approval ratings in the country.

While the tariff pain has been immediate for Midwestern farmers who are stuck with bushels of unsold crops and face a spike in bankruptcies, the South may not be far behind as Trump’s trade war drags on.

Politicians and business leaders in the region worry a protracted trade war could disrupt nearly three decades of economic revitalization that has brought industry, jobs, and billions of dollars of foreign investment to large swaths of the South, and bolstered the GOP’s firm grip on the region’s politics.

According to a recent analysis by Deutsche Bank, of the eight states whose economies are most affected by Chinese tariffs and are likely to get hit the hardest, five are in the South: Louisiana, South Carolina, Alabama, Kentucky, and Mississippi. All of them voted for Trump in 2016.

Trump’s grip on the South

While Republicans from Midwestern farm states have been more vocal in their opposition to the trade war, most notably Iowa Sen. Chuck Grassley, a farmer himself, Southern Republicans have mostly kept their heads down.

That may simply be a political calculation on the part of Republicans who hail from a region that still strongly backs the President. According to state trends compiled by Morning Consult, the President’s popularity has dropped more in the Farm Belt than it has in the Deep South. For example, since he took office, Trump’s net approval has fallen 19 points in Nebraska, 17 points in Iowa and 22 points in Kansas.

By comparison, he’s down only 10 points in Alabama, 11 points in Louisiana and 14 points in Mississippi.

That calculation may change if Trump’s trade policy begins to impose significant costs to Southerners. That could take a while as tariffs move along the complex supply chains woven through the region’s diverse industries, raising costs, trimming profits and eventually hitting consumers’ wallets.

Thursday’s news that Arkansas-based retail giant Walmart will be raising some prices due to increased tariffs is a harbinger of what’s to come.

The retail giant is the largest private employer across the South and a staple of the region’s identity. While consumers might not be feeling the full effects of tariffs yet, they will in a few months.

“If you’re getting into back-to-school and people are trying to buy clothes from overseas for their kids, that’s when people are going to feel it,” said Chip Felkel, a veteran Republican operative from Greenville, South Carolina. When that happens, partisan loyalty to Trump will only go so far for elected officials.

“At some point elected Republicans are either going to come to grips with or be reminded that all politics is local,” Felkel said.

For now, though, Southern Republicans are holding out hope the tariffs remain a temporary tool to make things better in the long term. “We’ve benefited from trade with China, but not to the degree that we should,” said Sen. David Perdue of Georgia, the former CEO of a low-price retailer prolific in the South, Dollar General. “We don’t have a level playing field.”

During the campaign, Trump’s message of foreign countries ripping off American workers and stealing their jobs resonated most in the Rust Belt, where free trade really has hollowed out manufacturing. That helped Trump become the first Republican in decades to win Pennsylvania, Michigan and Wisconsin.

But Trump’s tale of American carnage wasn’t as applicable to the South. As manufacturing dried up in the industrial Midwest, production shifted to Southern states, as companies chased non-union labor, cheap land, low taxes and deep-water ports. In this way, the region was fertile ground for the modern Republican party’s ethos of free-market economics and cultural conservatism.

Foreign direct investment also poured into the South as companies such as Michelin, Volvo, Bosch, and Fujifilm all set up major operations in South Carolina alone. The proliferation of foreign automotive assembly plants throughout the South — from BMW in South Carolina to Toyota in Kentucky to Nissan in Tennessee and Mississippi — are a testament to the region’s place as a manufacturing powerhouse. Seaports in New Orleans, Charleston, Savannah and Mobile have served as major gateways for international exports and imports for the region.

A drive down Interstate 85 — from North Carolina’s Research Triangle, through the South Carolina Upstate and Metro Atlanta, down to Montgomery — reveals a corridor of heavy industry. New factories and plants, many of them foreign-owned, are flanked by ancillary industrial parks and service firms.

What worries southern business leaders is that the President’s trade actions are undercutting the region’s economic success story. Mike Randle, the owner and publisher of the Alabama-based Southern Business & Development media group, spends much of his time tracking new investment projects across the 15-state region, from Texas to Virginia.

He says the slowdown has already begun.

“Tariffs have taken the most competitive region in the US and undercut those advantages,” Randle told CNN. “Activity has stalled. People are worried about what’s coming and, of course, costs have gone up across the board.”

According to Randle’s tally, the number of new automotive manufacturing projects in the South with 200 jobs or more peaked in 2015 at 111. By 2018, the number of projects was cut in half to 55.

Last year, the administration put tariffs on foreign steel and aluminum in the name of national security, hiking costs across much of the auto sector. Trump is considering issuing a similar tariff on foreign auto parts but appears likely to delay that action for up to six months.

Even still, the mere threat of the action has companies spooked, particularly given how damaging they could be to the southern auto sector.

“If he puts in these 232 tariffs [on foreign automobiles] we will be in recession within a year,” Randle said.

Uncertainty is a problem

That’s the reason, Randle adds, that nobody in economic development across the South supports the tariffs.

“When you’re building airplanes in South Carolina with Boeing or cars with Kia here in Georgia, for those companies their greatest need is certainty,” said J. Mac Holladay, who has run statewide economic development offices in South Carolina, Mississippi and Georgia. “We’re so interdependent — internationally, economically — there just has to be a way forward that isn’t just always taking an axe.”

Business leaders in the South aren’t sitting back and taking it. Michael Olivier, the former economic development secretary for Louisiana, says everyone from the state’s ports to its industry and agricultural associations, have been lobbying members of Congress to express their concerns that too many tariffs for too long are bad for business. “We’re a very trade-sensitive state,” Olivier said.

“I can’t tell you how many folks have come into our office either in Mt. Pleasant or in D.C. just saying they want to know what’s coming ahead,” said Rep. Joe Cunningham, a freshman South Carolina Democrat who represents the Charleston area. “There’s clearly hundreds of millions of dollars in investment projects that have been sidelined or that have been frozen until we figure out where we’re going in this ‘trade war.'”

What are Republicans waiting for?

Elected Republicans in the region haven’t been entirely silent. Senators like Scott of South Carolina and Johnny Isakson of Georgia have raised objections to specific protectionist actions — particularly the potential auto tariffs.

But what most Southern Republicans seem to be waiting for is a positive resolution to Trump’s trade standoff with Beijing.

“President Trump has made the defense of American workers the primary driver in all of his negotiations,” said Chris Wilson, a Republican pollster from Texas. “Our data shows voters in the South and even key battleground states approve. As long as the economy is strong, GOP members are safe standing with the President.”

Wilson admits that if the economy turns, that could change Trump and the GOP’s fortunes, even in the deep-red South. But for now there is plenty of trust among voters in the region that the President can deliver — even if they don’t like the administration’s methods.

“I’m not a tariff man,” Sen. Richard Shelby, a Republican from Alabama, told CNN. “I don’t like tariffs, because it’s action-reaction, always. But I do believe that Trump is onto something as far as renegotiating our trade agreements.”

He paused, then added, “But I don’t know if we can continue this for a long period of time.”