Song, Nordqvist & Law tied atop LPGA Pure Silk Championship after one round 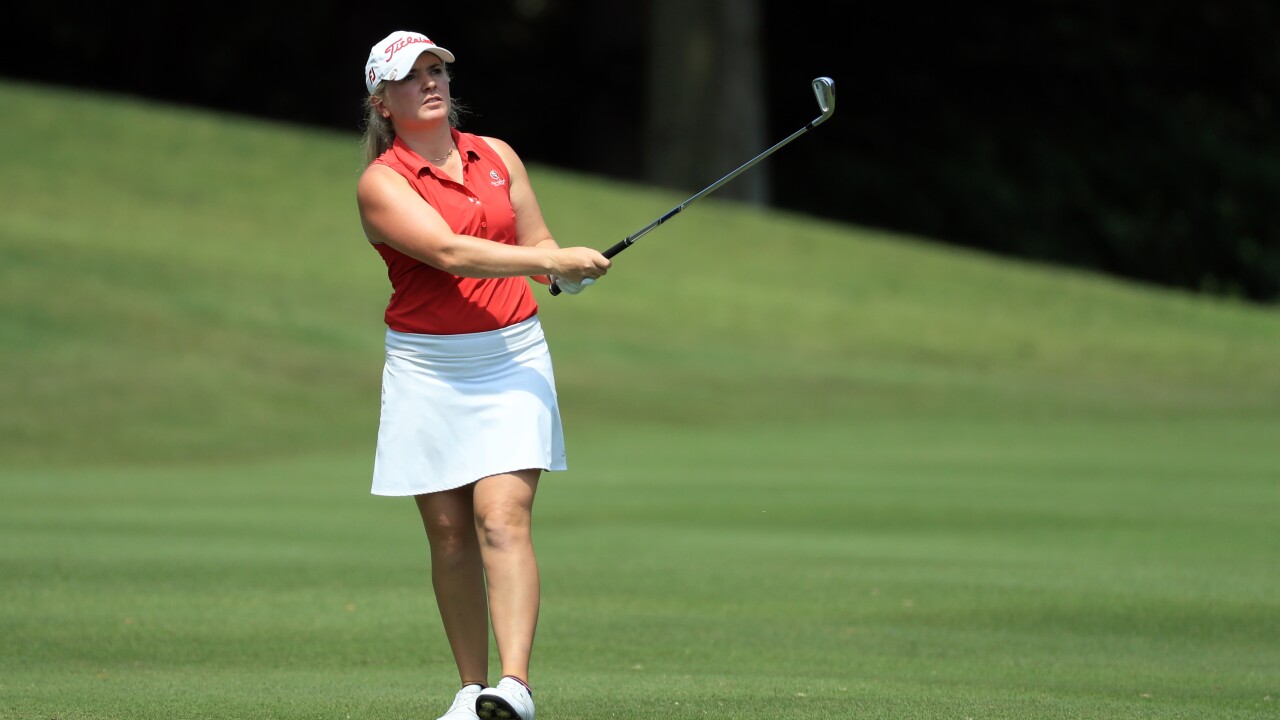 Bronte Law of England watches her second shot on the eighth hole during the first round of the Pure Silk Championship. (Photo by Hunter Martin/Getty Images)

Bronte Law of England watches her tee shot on the eighth hole during the first round of the Pure Silk Championship. (Photo by Hunter Martin/Getty Images)

WILLIAMSBURG, Va. (LPGA Media) – Following the first round of the Pure Silk Championship presented by Visit Williamsburg, three players hold the lead at 6-under 65. Two-time major champion Anna Nordqvist and Bronte Law set the lead early during the morning wave, while Jennifer Song matched the leaders in the afternoon.

“First of all, it was a bogey-free round so I was extremely happy about that,” said Song, who is looking for her first win on the LPGA Tour. “Course conditions are great. Greens are firm and pretty much everything was going well. I was driving it well and I was getting it on the green. When I had a chance for birdie, I think I pretty much made all of them.”

Anna Nordqvist of Sweden lines up her putt. (Photo by Hunter Martin/Getty Images)

Law, who also went bogey-free, has now gone 45 holes through two tournaments without a bogey. “Made some good par saves here and there from some long putts. Just found my groove a little bit,” said Law. “Made an eagle on the third hole, which was my backside, and from there kind of started to pick it up a little.”

Gemma Dryburgh, Jacqui Concolino, Jasmine Suwannapura and 2019 LOTTE Championship winner Brooke Henderson are one behind at -5, along with Monday qualifier Katherine Perry.

Eight-time LPGA winner Anna Nordqvist got off to a hot start on Thursday morning at the Pure Silk Championship presented by Visit Williamsburg. Nordqvist carded four birdies in a row (holes 13-16) and hit 15 of 18 greens in regulation with just 27 putts en route to a first-round 65, her lowest round of the 2019 LPGA season, and a share of the lead.

“I feel like I’ve played a lot of good — well, can’t say good golf, but I feel like I play a lot solid golf,” the two-time major champion said. “Just haven’t really got anything out of it. Today was very consist, solid, and didn’t make any big mistakes. So definitely nice that two weeks off, but you never like missing cuts, especially when it just didn’t feel like I played that bad.”

Nordqvist said the bentgrass greens at the Kingsmill Resort River Course were a welcome sight after she struggled on the Poa annua greens at the HUGEL-AIR PREMIA LA Open and the LPGA MEDIHEAL Championship where she missed her first two cuts of the season. Despite being at the top of the leaderboard, Nordqvist found the varying winds on Thursday in Williamsburg a challenge.

“I found the conditions really hard this morning, and you have to hit a lot of good shots. Right now I’m just very proud of myself what I did this morning. Not really trying to worry about the past or the future. Just let it be.”

Bronte Law of England watches her second shot on the eighth hole during the first round of the Pure Silk Championship. (Photo by Hunter Martin/Getty Images)

Bronte Law has had two of the best days of any player in the last two rounds on the LPGA Tour. On Thursday in the first round of the Pure Silk Championship Law hit 15 of 18 greens in regulation in a bogey-free round that included an eagle to open with a 65. Three weeks ago in her last start at the LPGA MEDIHEAL Championship, Law closed with a Sunday 65 to vault up the leaderboard and into her first career playoff.

While Law fell short of hoisting her first career LPGA trophy, she said she learned a lot from the experience and hopes she’s still carrying a bit of momentum from her career-best finish in San Francisco.

“You would like to think so, but I think every time you step up on the tee it’s a new day and anything can happen,” Law said on Thursday in Williamsburg. “You just try and go out there and play your best golf. I thought I did a good job of staying composed out there today. If I hit a bad shot, not letting myself get ahead of myself or worry about it too much. Ultimately, I’m very pleased with the result.”

This is the first time in her career the Englishwoman has held a share of the lead following any round on the LPGA, but she said she knows better than to get comfortable at the top following just one round.

“Everyone out here is really good at what they do. You have to keep pushing higher and higher, making more and more birdies, until the tournament is over really. You can’t sit on it for a second because someone will come up right behind you.”

64 of the 144 players in the field fired rounds under par on Thursday at the Kingsmill Resort.

Louise Stahle was the last player to gain entry into the Pure Silk Championship when Sei Young Kim withdrew on Wednesday afternoon, and fired a 3-under 68 in the first round, her best round since carding a 68 at the 2010 Navistar LPGA Classic.

The first reshuffle of the 2019 LPGA Tour season will happen after the conclusion of this week’s Pure Silk Championship presented by Visit Williamsburg. Category 8 on the LPGA Priority List will comprise of members in the Top 80 of the current year’s Money List with priority based on the order of the list. In addition, Members in categories 14 through 19 who have earned official money will be re-seeded into Category 13 and ranked in order of their position on the current year’s Money List through the Pure Silk Championship.

Danielle Kang withdrew on Thursday following her round, with no reason given.