Chesapeake Police searching for man who robbed 7-Eleven at gunpoint 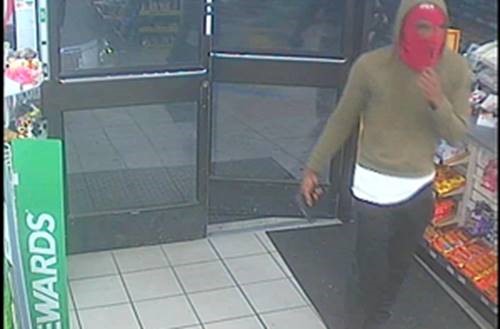 CHESAPEAKE, Va. – The Chesapeake Police Department is asking for the public’s help in finding the man who robbed a local 7-Eleven at gunpoint earlier this week.

Around 1:21 a.m. on May 27, police say a man entered the 7-Eleven located at 4701 Taylor Road with a semi-automatic firearm and demanded money from the employee.

After getting away with an undisclosed amount of money, police say he fled the store on foot toward the YMCA.

The suspect is described as a black man who is between 6′-6’2″ tall and weighs between 160-180 pounds. At the time of the robbery, he was wearing an OD green hooded sweatshirt with a white t-shirt underneath, black Adidas-style pants with grey stripes going down the side and red Nike slides with a black swoosh and white outlines.