All but one of the 12 killed in the Virginia Beach shooting were city employees, official says 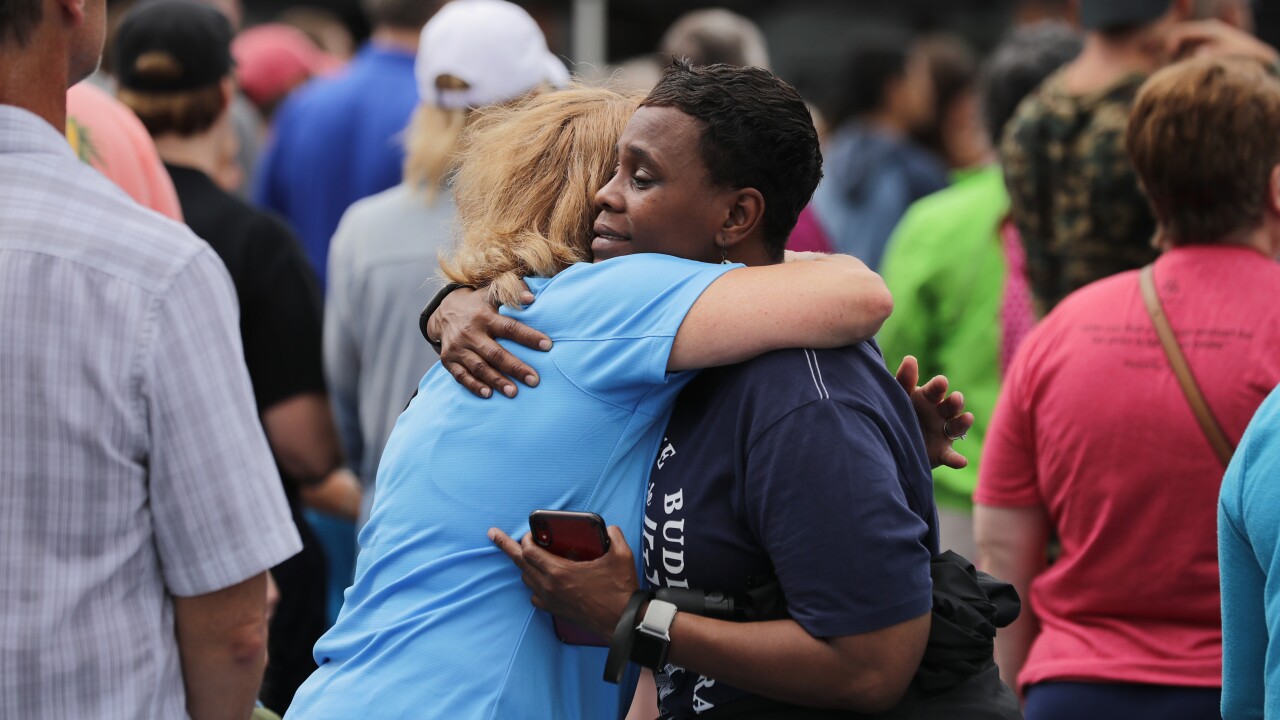 VIRGINIA BEACH, VIRGINIA – JUNE 01: People gather for a public prayer service organized by Lifehouse Virginia Beach in the parking lot of a shopping center the day after a mass shooting left 13 people dead June 01, 2019 in Virginia Beach, Virginia. The names of the 12 victims of Friday’s shooting rampage at the city’s Municipal Center were made public along with the identity of the shooter, city engineer DeWayne Craddock. (Photo by Chip Somodevilla/Getty Images)

A day after a Virginia Beach city employee killed 12 people — including colleagues — in a shooting rampage in the municipal building where he worked, investigators are scrambling to nail down why it happened, officials said Saturday.

“It’s still a sense of shock, disbelief. Why did this happen?” Bobby Dyer, mayor of the coastal Virginia city, told CNN, standing across the street from the multistory brick building where the massacre happened.

“I guess the big question is why. We want to know, too.”

Authorities said DeWayne Craddock, 40, a certified professional engineer in the city’s public utilities department, moved through and opened fire on three floors of Building 2 of the Virginia Beach Municipal Center at the end of Friday’s workday.

Craddock killed a dozen people and injured others, and sent terrified witnesses running out of the building or hiding under desks before the shooter died at the end of a lengthy gunbattle there with four police officers, authorities said.

Eleven of the 12 killed were city employees. The other was a contractor who was there to fill out a permit, City Manager Dave Hansen said.

Officials are now left not only answering questions about what happened but also dealing with the deaths of their colleagues. Hansen said he’d worked with many of them for years, and served with one in the US military in Germany. Dyer said the contractor was a friend of his who’d done carpentry work at his home.

“They leave a void that we will never be able to fill,” Hansen said Saturday before he read the victims’ names.

Four others hurt in the shooting were in hospitals Saturday: Three were in critical condition, while one was in fair condition, hospital officials said. An officer was shot in the gunfight but survived because of his ballistic vest, police Chief James Cervera said.

Friday’s massacre is the deadliest in the United States this year and adds the Virginia city to a grim list of places affected by a mass shooting.

Gunman fired through all floors except the basement, officials say

Officials said Saturday they were either searching for answers, or unwilling to reveal details, about what spurred the shooting.

A Virginia government source briefed on the investigation told CNN the shooter was a “disgruntled employee.”

Craddock was a certified professional engineer in the city’s public utilities department for about 15 years, officials said. He is listed on department news releases as a point of contact for information on local road projects over the past several years.

Cervera, the police chief, said his investigators still don’t know the shooter’s motive. He and Hansen declined to answer questions Saturday about whether Craddock had threatened anyone in the building previously or faced discipline at work.

During the news conference, the chief reiterated that Craddock was a current employee of the city.

The gunfire started at the end of the workday while people still were visiting the municipal center for business. He fired on every floor except the basement as he moved through the building, officials said

Craddock had a security pass “like all employees had” to access inner offices of the building, beyond the public service desk near the entrance, that aren’t otherwise accessible to nonemployees, Hansen said.

Megan Banton told CNN she was on the building’s second floor when the shooting started. She and about 20 of her colleagues pushed desks against the doors before rushing to hide in their bosses’ office.

She called 911. She said she could hear yelling, screaming and muffled gunshots.

“I was trying to listen to what (was happening) and listen to 911 (operator), and we just hoped it would be over soon,” she said.

Four officers confronted the shooter inside the building in what the chief called a “long gunbattle.”

Two detective supervisors entered the building from their workplace across the street, and were eventually joined by two K-9 officers. The four began a shootout with the suspect, and helped stop him from committing more carnage, Cervera said.

The gunman was wounded, and officers tried to save him, the chief said.

“Even though he was involved in a long-term gunbattle with these officers when he went down, they did what cops do and they rendered first aid to this individual,” Cervera said Friday.

Bureau of Alcohol, Tobacco, Firearms and Explosives Special Agent in Charge Ashan Benedict told reporters two .45-caliber pistols were found at the scene. Both were legally purchased, one in 2016 and one in 2018.

On Friday the chief indicated one pistol had a suppressor and that several empty magazines that could hold more rounds than a standard magazine were found near the shooter.

A rifle also was found at the shooting site, according to a law enforcement official. Cervera has declined to comment about the presence of a rifle and Benedict didn’t mention a rifle in his comments.

Investigators have found “additional weapons” at the gunman’s home, the chief said.

The FBI has taken over the evidence recovery portion of the investigation and has 40 agents in Virginia Beach, Cervera said.

Sometime before the shooting Friday, a co-worker of Craddock’s had a final exchange with him that amounted to “have a good weekend,” the colleague said.

Joseph Scott, who said he worked with Craddock for several years, saw him in a bathroom at work Friday.

“He was at the sink, brushing his teeth like he always did,” Scott told CNN. “I used the bathroom and walked up and was washing my hands, and I said, ‘How are you doing?’ He said he was doing OK.

“And it was no more than that.”

Scott said Craddock was “what I thought was a good person,” and described him as generally quiet.

Craddock’s parents, reached Friday night, told CNN they weren’t aware of any trouble that he was having with his employer.

Before he worked for the city, a Virginia-based engineering firm hired Craddock in 2003 as a project manager. An article in a business newspaper that mentioned the hiring said Craddock held a bachelor’s degree in civil engineering from Virginia’s Old Dominion University.

According to Virginia’s Department of Professional and Occupational Regulation, Craddock obtained his certified professional engineer license in the state in 2008. The license wasn’t set to expire until June 2020.

Many victims were longtime workers for the city

Hansen said the 11 slain city employees had worked for Virginia Beach for times ranging from 11 months to 41 years.

Nettleton, an engineer with the city’s public utilities department, “served with me as a lieutenant in Germany in the 130th Engineer Brigade,” said Hansen, the city manager.

The city government said it will hold a remembrance event for the slain victims at 7 p.m. Thursday at Rock Church in Virginia Beach.

David Hogg, who survived the Parkland, Florida, school massacre, responded to the latest mass shooting with a short tweet: “How many more.”

“This is the most devastating day in the history of Virginia Beach,” said Dyer, the city’s mayor. “The people involved are our friends, co-workers, neighbors, colleagues.”

The city will help them go through the healing process, he said.

Gov. Ralph Northam ordered all Virginia flags to be lowered to half-staff across the state until sunset on June 8 in memory of the victims, according to the Virginia Capitol Police.

In his first public comments on the shooting Saturday, President Donald Trump said he had called Northam and Virginia Beach’s mayor and vice mayor to offer condolences.

“The Federal Government is there, and will be, for whatever they may need. God bless the families and all!” Trump said in a tweet.