Remorse and resilience: Virginia Beach copes with life after another American massacre 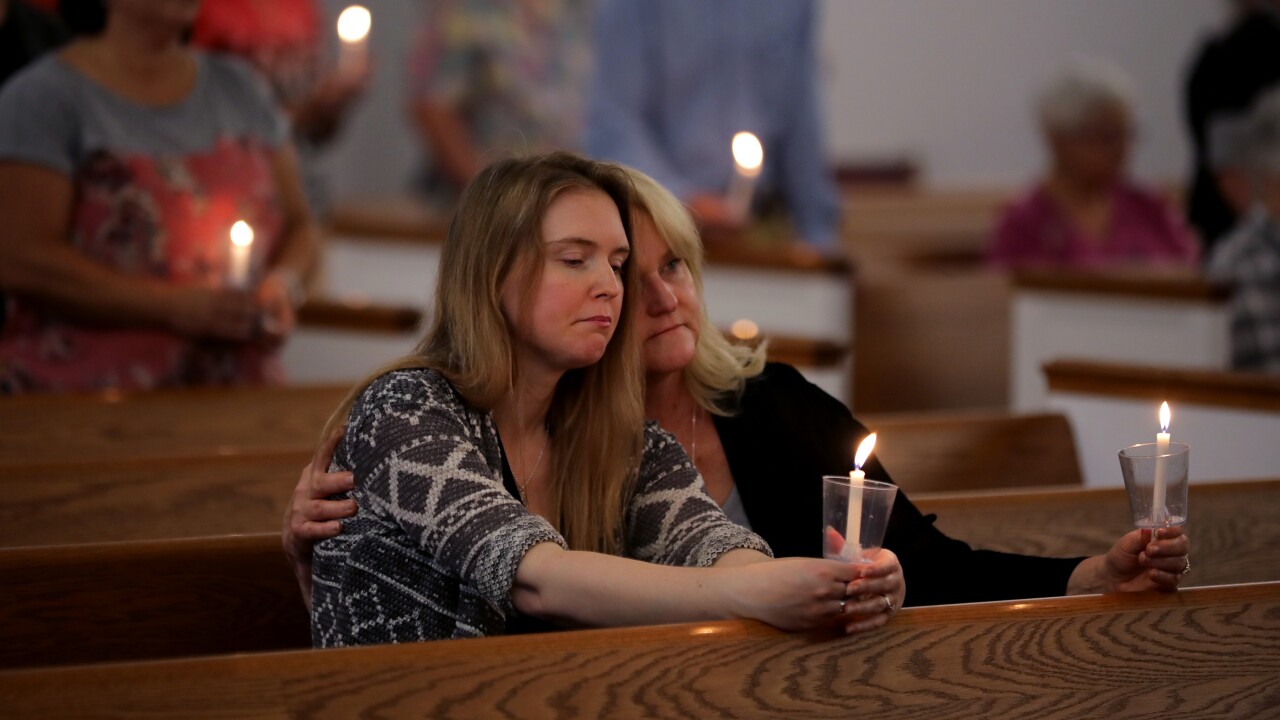 VIRGINIA BEACH, VIRGINIA – JUNE 01: Laura Goodman (L) and her mother Peggy Harrison pray during a vigil for the community at St. John’s Baptist Church the day after a mass shooting June 01, 2019 in Virginia Beach, Virginia. Eleven city workers and one private contractor were killed by suspected shooter and city engineer DeWayne Craddock on Friday at the Municipal Center. (Photo by Chip Somodevilla/Getty Images)

VIRGINIA BEACH, VIRGINIA – JUNE 01: Kristal Davis, sister-in-law to shooting victim Ryan Keith Cox, pauses to look at flowers and flags left as a memorial outside of the crime scene at the Virginia Beach Municipal Center June 01, 2019 in Virginia Beach, Virginia. Davis said Cox, who was an accountant in the pubic utilities department, had helped a group of people escape the building and had re-entered the building to help evacuate others when he was shot. He was one of 12 victims of Friday’s shooting rampage at the Municipal Center along with the shooter, city engineer DeWayne Craddock. (Photo by Chip Somodevilla/Getty Images)

It was the morning after the darkest day in this city’s history when Virginia Beach joined the list that nobody wants to be on: the site of a mass shooting.

At a farmer’s market, Elaine Jenkins sorted flowers at Kempsville Florist, a shop that’s been in her family for 50 years. She was making boutonnieres and corsages for a local high school’s prom.

But every so often on this bright Saturday, someone would stop in and softly ask for a bouquet of flowers. She knew they were destined for a spot three miles down the road, where mourners had gathered at a makeshift memorial outside a municipal building.

Inside that building, a city employee killed 11 co-workers and a contractor there to get a permit on Friday afternoon. Twelve died and four more were injured in what was the deadliest mass shooting in the United States thus far in 2019. The gunman died after a shootout with police.

Now, on the day after, residents of Virginia Beach faced the day with a mix of remorse and resilience.

Church signs urged the city to pray for the victims. Shop windows bore the phrase #VBStrong, a hashtag that has become commonplace after our American massacres, with just the sites of carnage changed. At vigils spread across the sprawling city of 450,000, mourners sang “Amazing Grace” and held candles against the night’s gathering darkness.

“We had always thought we were a little different,” said Dan M., a combat veteran who declined to give his last name as he stirred a vat of honey at the Farmers Market. “But I guess now we’re not.”

As the tragic reality sets in, memorials continue to grow at the municipal center in #VirginiaBeach – we’re just minutes away from heading an update from police & city leaders

The last note just cuts me to the core https://t.co/Z0ZZgEQDuF via @WTKR3 pic.twitter.com/VaGBoA3BMI

Still, life continued. There were baseball games and barbecues and raucous swim meets at the YMCA. Beachcombers walked the city’s long oceanfront, as breakers hushed the sand. On Friday night, a concert at the Farmers Market had continued as planned, though the mood was hushed and somber, said Trish Rovito, a city administrator who helps run the market.

Rovito could hear the quiet conversations, “Are your people OK? Did you hear about so and so?”

No one seemed to know exactly what to do, or how to process the unthinkable.

“Like everyone else I’m shocked,” said Jenkins, the florist, taking off her glasses to wipe tears from her face. “It’s just so sad.”

As if to prove the point, Peggy Bryant, a lifelong Virginia Beach resident, walked into Jenkins’ flower shop to buy a yellow tulip for her daughter’s birthday. She had just come from the hairdresser, who was devastated after learning that one of her clients had been killed in Friday’s shooting.

Mourners pray for the victims of the mass shooting, on June 1, 2019, during a vigil in the parking lot of a shopping center in Virginia, Beach, Virginia. – A municipal employee sprayed gunfire “indiscriminately” at the Virginia Beach Municipal Center on May 31, 2019, police said, killing 12 people and wounding four in the latest mass shooting to rock the US. (Photo by Eric BARADAT / AFP) (Photo credit should read ERIC BARADAT/AFP/Getty Images)

Bryant said she got emotional while driving past Princess Anne Middle School, where city officials had gathered the night before to tell victim’s families news that no one wants to hear.

“If you knew someone killed or not, this is still a community. It’s our community,” Bryant said.

“There are lot of people grieving that this happened in our city,” said Linda Skipper as she arranged the tomatoes on her stand in the Farmer’s Market. “But I guess we have to face the reality that these kinds of things are happening all across our country.”

Alice Philips, who manages another produce stand nearby, said she knew something terrible had happened on Friday when she heard the sirens wailing down the street, heading to the municipal building. The sirens didn’t stop for 45 minutes, she said.

Philips texted with a friend who worked in the city municipal center, a complex of red-brick buildings tucked away in a residential neighborhood. He had lost 12 friends in the shooting, she said.

“The ripples, the waves of the trauma. People are waking up this morning without a spouse, a father, a daughter …” Phillips said, trailing off.

At a shopping center across from the site of the shooting, Pastor Chris Mitchell Jr. had organized an impromptu prayer service on Saturday afternoon.

As a guitarist strummed quiet chords, about a dozen people gathered in the parking lot. They sang the hymn “How Great Thou Art,” and prayed for the souls of the deceased and the victims’ families, including the family of the gunman.

“When something like this happens and hits so close to home, you reach for anything you can do,” Mitchell said after the service. “Obviously we’re going to do all the practical things to give and support but we also thought it was important for us to be here, on the grounds, to just lift our voices and ask God for His mercy.”

Mitchell said he went to bed at 1 a.m. on Saturday, and woke three hours later, weeping, asking God what he could do to help.

That evening, Virginia Beach residents and politicians gathered for a vigil at Bridge Church, where they were greeted by large screens bearing the biblical quote, “Blessed are they that mourn; for they shall be comforted.”

The pastors spoke of the past 24 hours, the inexplicable violence that seemed to strike out of nowhere, the questions that lingered: Where was God in all of this?

“Some of these questions we just can’t answer,” said Pastor Archie Callahan, “We saw the worst of mankind. Tonight we grieve the loss of twelve innocent lives and we hurt for their families.”

After the service, Justin Fairfax, Virginia’s lieutenant governor, fielded questions from a scrum of reporters. He said his state should consider new gun-control measures, including limiting the sale of large-capacity magazines.

“We can’t simply pray for victims of mass shootings,” Fairfax said. “We need to act to stop them before they happen. People are saying enough is enough with the mass shootings in this country. They don’t happen anywhere else but the United States.”

“We can’t simply just prepare people for mass shootings and have them do drills where they duck and run and hide…” @LGJustinFairfax attended the vigil at Bridge Church and says he wants to limit high capacity magazines. #VBShooting pic.twitter.com/F3Qa121Qyd

Among them was Carla Lawrence, a Virginia Beach resident whose parents live two miles from the site of the shooting. She said news of Saturday night’s vigil spread on the sorority’s alumni Facebook page. “This is what we do,” Lawrence said. “We support our community.”

Lawrence said her life has been touched by three mass shootings in recent years. Her father is from Charleston, South Carolina, the site of a massacre at Mother Emanuel AME Church in 2015. Her daughter was a student in Charlotte, North Carolina, where a gunman killed two and injured several others at UNC-Charlotte in April.

And now, Lawrence’s own city has been haunted by the same senseless violence.

“This is too close to home,” Lawrence said. “It’s surreal.”

She said she now checks the exits when she arrives at work, seeking the quickest way out should a shooting erupt.