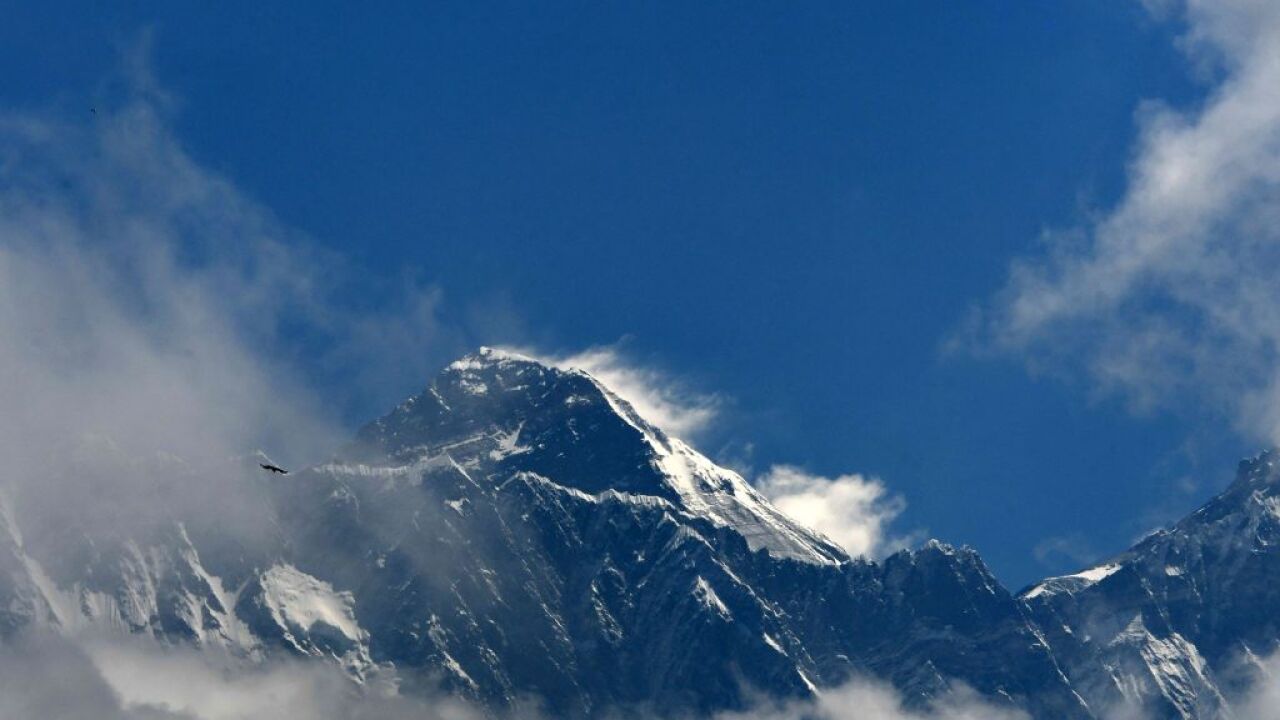 Mount Everest (height 8848 metres) is seen in the Everest region, some 140 km northeast of Kathmandu, on May 27, 2019. (Photo by PRAKASH MATHEMA / AFP) (Photo credit should read PRAKASH MATHEMA/AFP/Getty Images)

A helicopter search team in the Indian Himalayas has spotted a backpack in the snow on the unnamed peak where eight climbers are believed to have gone missing a week ago.

Uttarakhand District Magistrate Vijay Kumar Jogdande said it was likely the missing team had been caught up in a “huge avalanche.”

“The chances of survival are almost zero now,” Jogdande said.

Helicopter teams Sunday saw signs of an avalanche on the peak the group were thought to be on, according to two state officials. On Monday a lone chopper went to recce the area and its crew discovered the backpack at an elevation of about 5,000 meters.

The missing climbers — four Britons, two Americans, an Australian and their Indian liaison officer — went missing in the region of Nanda Devi East mountain, one of the highest peaks in India at just over 24,000 feet (7,400 meters).

The group was attempting to scale a previously unclimbed and unnamed peak believed to be about 21,250 feet (6,477 meters) high, according to Facebook posts from the group’s expedition company. The alarm was raised a few days after they failed to return to camp.

Jogdande said that heavy rain and high winds in the area had been hampering search efforts.

The British Association of Mountain Guides (BMG) identified British national Martin Moran as the group’s leader and one of those missing.

“Martin Moran was leading six clients and an Indian National,” said BMG President Mark Charlton in the statement, which was posted on Facebook. “The BMG is assisting where possible and is in contact with the Indian authorities.”

Moran owns Scottish-based mountaineering adventure company Moran Mountain, which runs climbing expeditions in the Alps, Norway and the Himalayas. On its website, the company said it is one of “Britain’s most experienced mountain adventure companies.”

Moran, from Tyneside in northeast England, is an experienced climber and has been a British Mountain Guide since 1985, according to Moran Mountain’s website.

In an official statement, the Moran family said it was “deeply saddened by the tragic events.”

“As a family, we share the same emotions that all next of kin are experiencing in not knowing the whereabouts or well-being of those closest to us,” the statement said.

The family said it was pressing for the search area to be widened and would continue “to ascertain the well-being or otherwise of all those in the climbing group,” until they had further news.

Lost in the Himalayas

The missing eight climbers were part of a larger team of 12 who set off from the village of Munsiyari on May 13. After a six-day trek, the team reached Nanda Devi East base camp on May 18.

On May 22, the Moran Mountain group posted on Facebook saying the team had reached their second base camp at 15,977 feet (4,870 meters).

Jogdande said each member of the 12-person team had permits to summit Nanda Devi East, but they divided themselves in two teams at the higher base camp.

The other eight set off to summit a previously unclimbed and unnamed peak. The Moran family statement said the last contact with the group had been from a camp at around 17,716 feet (5,400 meters).

“It is not entirely clear what happened from this point onwards or indeed the timeline of events,” it added.

“There are multiple unknown peaks in this region. If we had known before (that they were attempting the unnamed peak) we would not have given permission,” Jogdande said.

After the eight-person group failed to return to base camp on May 26, the authorities were alerted on May 31, Jogdande said.

The identities of the other missing climbers have not been officially released.

A United States state department official said in a statement it was aware of reports of two US citizens missing in India and was “monitoring the situation.”

Similarly, the UK Foreign Office said it was in contact with Indian authorities following reports of the missing climbers.

And Australia’s Department of Foreign Affairs and Trade also said it was “providing consular assistance to the family of an Australian that may be among a group of trekkers missing in the Nanda Devi area of India.”

The rescue effort follows the deaths of 11 climbers on Mount Everest this year, amid extraordinary images of queues of people waiting to get to the summit, prompting fresh concerns over the increased commercialization of mountaineering expeditions.