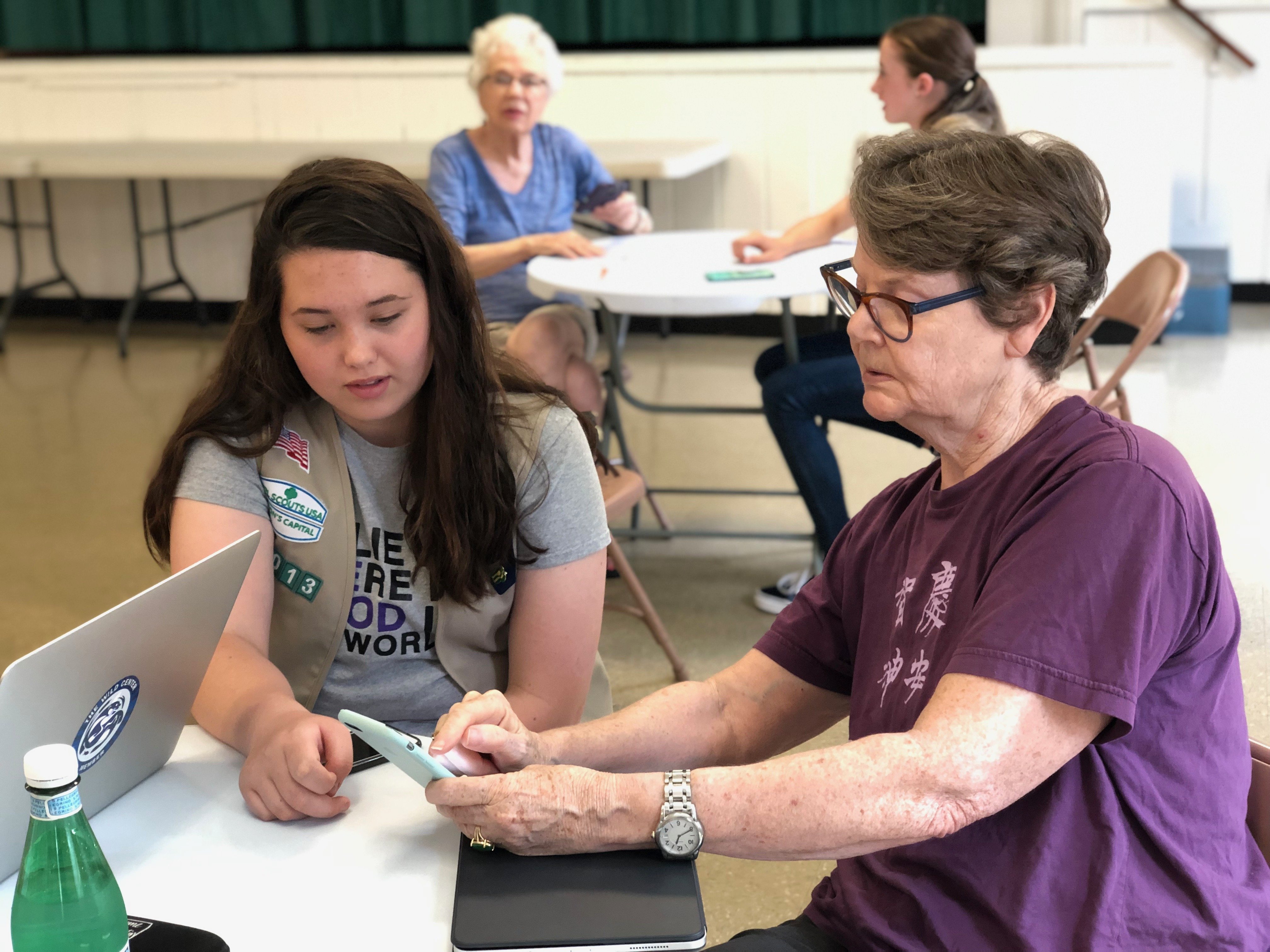 They came in need of help, smartphones in hand. One couldn’t answer calls. Another had mailbox problems. Many needed screen adjustments, especially enlarging the text size on their devices.

Luckily for this group of senior citizens, Girl Scout Troop 60013 was on it.

This week, the Arlington, Virginia-based scouts hosted “TechBridge,” their first walk-in clinic to help local senior citizens learn how to use their cellphones.

“Some had specific questions, but a lot of people came and just wanted to learn,” Maura Sammis, a Girl Scout Cadette who helped some attendees with Apple Pay, said. “I set that up for a couple people and they were really excited about that.”

“I was teaching this older woman how to text people, and the first thing that she did was text her daughter,” Middleton recalled. “And I thought that was really sweet, and it just made me feel really, really happy.”

The eighth-graders came up with the idea for the clinic. When it came time to brainstorm a project for the Girl Scout Silver Award — the highest honor a Cadette can achieve — it was a natural fit.

“It has to be something that helps your community,” Cadette Tara Udani explained. “And so for us, that was teaching elderly in our community how to use their technology better.”

According to the AARP, 83% of Americans age 50 to 64 own smartphones. Among them is Sammis’ grandmother, whom she helped upgrade to an iPhone. It turned out to be great preparation for the clinic.

“I realized that you have to go super slow and steady in order for them to process all the information,” Sammis said.

That insight echoed the advice the girls received from an adviser, a neighbor who happens to work for the AARP. The scouts also surveyed older people that they knew to tailor the clinic’s offerings.

After months of research and development, the girls divvied up their areas of expertise: Udani, 13, focused on accessibility, displays, data backup and cloud storage; Sammis, 14, concentrated on social media and password security; and Middleton, 14, worked on health and travel apps. She also dealt with spam. And, despite being an iPhone user, Middleton became the troop’s Android expert. It took her “about an hour” to learn the operating system.

During the clinic, the teens helped seniors one-on-one and in small groups, spending up to an hour with each person.

By the end of the day, Nancy Taylor, 90, was thrilled she had learned how to text on her Android phone.

“Those girls were just marvelous,” Taylor, a great-grandmother of four, said. “They were all set up and ready for us and had a very mature attitude about answering our questions, and they were magnificent.”

As part of the Silver Award’s sustainability requirement, the Cadettes produced handouts for attendees to take home in case they needed to review what they learned. The troop hopes to hold more clinics in the future, especially as their community becomes a growing tech hub with Amazon’s second headquarters soon moving in.

“Pretty much everybody around our age, we all grew up with this kind of technology, but my grandparents, I know, definitely did not,” Middleton added. “I think that this is really important to do, just to help everybody stay safe and stay well-educated.”