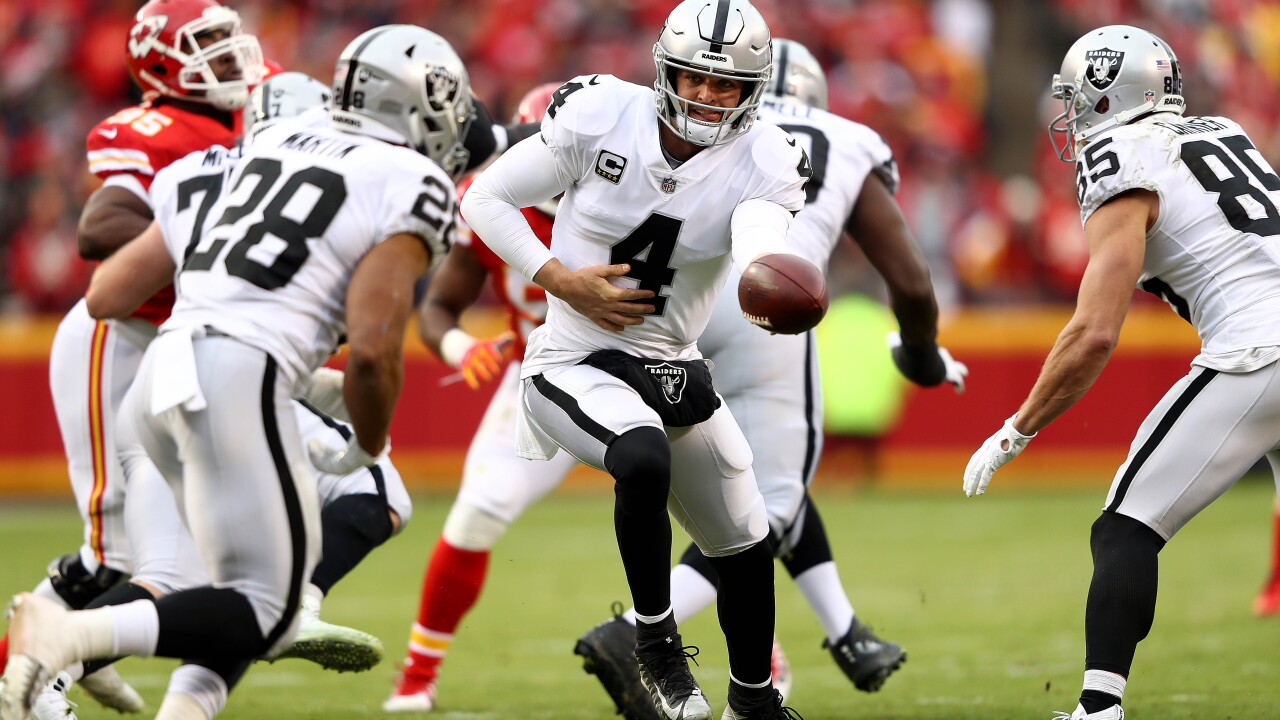 KANSAS CITY, MISSOURI – DECEMBER 30: Quarterback Derek Carr #4 of the Oakland Raiders in action during the game against the Kansas City Chiefs at Arrowhead Stadium on December 30, 2018 in Kansas City, Missouri. (Photo by Jamie Squire/Getty Images)

OAKLAND, Ca. – The Oakland Raiders have been chosen to be featured in the HBO documentary series, Hard Knocks.

“If you’re a fan of football or great storytelling, Hard Knocks with the Oakland Raiders is going to be must-see television,” says Peter Nelson, executive vice president, HBO Sports. “We are so grateful to this storied franchise for opening up its doors and allowing HBO and NFL Films to spend the summer with the Raiders in what promises to be a compelling and engaging training camp.”

In the next few weeks, camera crews will head to the Bay area to begin filming, showing a focus on the daily lives and routines of players and coaches.

‘Hard Knocks: Training Camp with the Oakland Raiders’ will chronicle head coach Gruden as he enters his second season leading the team, assistant coaches and players throughout training camp and the preseason.

“Since the AFL-NFL merger, the Raiders have been a part of some of the most iconic moments in League history,” says NFL Films senior executive Ross Ketover. “We at NFL Films have been thrilled and honored to showcase the mythology of the Raiders from the Holy Roller, Sea of Hands, Ghost to the Post all the way to today with Coach Gruden and this unbelievable cast of players and coaches. Needless to say, we’re very much looking forward to this season of Hard Knocks.”

Viewers will get an inside look each week as players experience the daily routines of an NFL training camp.

A 30-person NFL Films crew will be in Raiders’ training camp in Napa Valley, shooting over 1,750 hours of footage over the course of the series. Camera and sound crews will have unencumbered access to players’ and coaches’ meeting rooms, training rooms, living quarters and practice fields.

“Everybody wants to be a Raider. Now they’ll find out what it takes to become one,” said Raiders owner Mark Davis.

The Washington Post wrote, “Turning football players into people is what HBO’s Hard Knocks series does so well. The massive scope, meticulous editing and time-hopping special effects that highlight a production under massive time constraints are all impressive, but it’s the film crew’s access to NFL players that makes the program special.” NFL.com stated, “There are myriad reasons why HARD KNOCKS remains one of the best shows on television; it’s ability to show us the human side of cutdown weekend is near the top,” while USA TODAY wrote, “Players’ lives and their hopes and dreams play out each NFL preseason on HARD KNOCKS. It’s that month-long human drama that makes the show so profoundly compelling.”

‘Hard Knocks: Training Camp with the Oakland Raiders’ will be narrated by Liev Schreiber. This August will mark the 13th season with Schreiber voicing the weekly NFL training camp series.