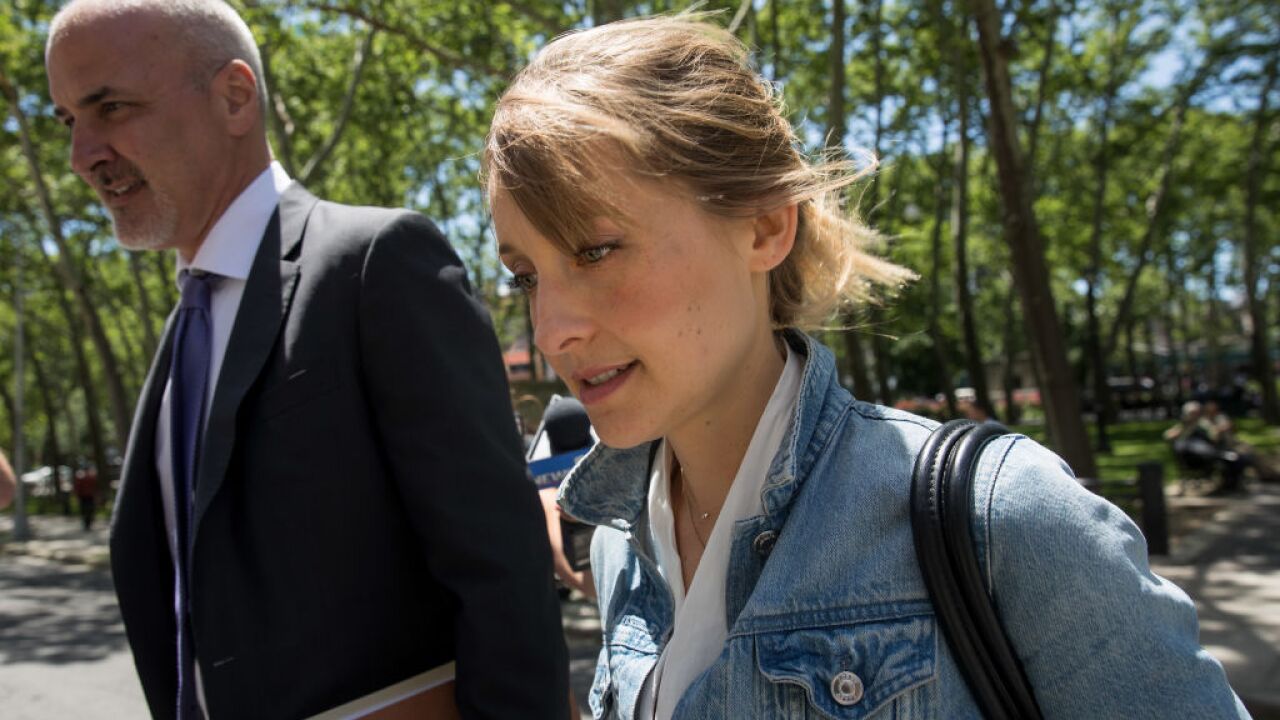 NEW YORK, NY – JUNE 12: Actress Allison Mack arrives at the U.S. District Court for the Eastern District of New York for a status conference, June 12, 2018 in the Brooklyn borough of New York City. Mack was charged in April with sex trafficking for her involvement with a self-help organization for women that forced members into sexual acts with their leader. The group, called Nxivm, was led by founder Keith Raniere, who was arrested in March on sex-trafficking charges. (Photo by Drew Angerer/Getty Images)

(CNN) — An actress testified Monday that “Smallville” star Allison Mack pulled her deeper into the activities of the cult-like group Nxivm, where she eventually became a “slave” in the organization’s secret sex society and was blackmailed into staying silent.

Nicole, 31, was identified by prosecutors by only her first name to protect her identity as she testified for three days. She has not been charged with a crime.

Nxivm founder Keith Raniere is charged with racketeering, sex trafficking, sexual exploitation of a child, and human trafficking, among other offenses. He has pleaded not guilty to all charges. Nxivm marketed itself as offering purported “self-help” classes taken by nearly 17,000 people around the world, prosecutors say.

Earlier coverage: ‘Please let me out’

Nicole testified she had been studying and working as an actress in Los Angeles for almost a decade, mostly in commercials. She decided in 2014 that a move to New York would help shift her career. Her ex-boyfriend, an actor on a network TV series, suggested she take a program of courses called “The Source.” They were given in upstate New York and among many classes Nxivm offered.

She liked that the courses combined acting and psychology, and hoped they would help her overcome her fears when auditioning.

She said her ex-boyfriend told her about successful and famous people involved Nxivm, like Mack; Emilio Salinas, son of a former Mexican president; and Clare Bronfman, a Seagram’s liquor heiress. Mack and Bronfman are co-defendants and pleaded guilty to related charges. Mack pleaded guilty to racketeering and racketeering conspiracy charges in April. Salinas, who has not been charged with a crime, did not respond to a CNN request for comment, but did tweet a statement in May saying he was never involved with Nxivm’s alleged secret society called “DOS,” adding that members denied its existence.

From the beginning, Nicole said, she was uncomfortable about some aspects of Nxivm. Students and instructors wore different colored sashes to signify their ranks, she said, and would bow when entering and leaving a room.

Group members idolized Raniere, calling him the smartest man in the world, she said. At the annual celebration of Raniere’s birthday, known as “V-week,” because he was called “Vanguard,” Nicole started to become good friends with Salinas, to whom she confided her true feelings about Nxivm.

“It seems a little weird to me,” she testified. “I don’t really like situations where someone is idolized. It just feels weird.”

At the end of her five-day course, she was persuaded to take more classes. Both her ex-boyfriend and Mack told her that staying involved in “The Source” would give her a built-in community once she moved to New York in 2015.

Nicole testified that she was struggling with her career after moving east and eventually began teaching classes for “The Source” to make money.

She read from journal entries in court detailing suicidal feelings and worries that she had “screwed everything up” by relocating.

In February 2016, after Nicole emailed Mack her concerns, Mack met with her at a Manhattan luxury hotel to talk about an all-women’s mentoring group within Nxivm called “The Vow,” Nicole testified. Members who served as “mentors” and “mentees” pushed each other through fears to become stronger physically, mentally and intellectually. She later learned the group was also called DOS.

“She told me about this women’s organization,” Nicole testified. “That it was gonna make me feel better. It would be exactly what would help me get out of where I was mentally right then.”

In order to hear anything about the organization, Nicole would need to give “collateral” or damaging information that would hurt her family and those closest to her. Nicole testified that Mack convinced her to write a letter to a local newspaper falsely alleging that her own father had sexually abused her.

Only after giving damaging letters about her family did Mack tell Nicole that “The Vow” was a lifetime commitment and involved getting “a small brand, like a tattoo.” Still, Nicole agreed to join. She was at a low point in her life, she testified.

Mack did not mention that Raniere sat at the top of the group, Nicole testified.

“There were so many things that were added on later once you were, like, sealed into this situation,” she testified.

She was told that she was now in a master-slave relationship with Mack, was ordered not to sleep with her boyfriend at the time and to remain celibate for three months. After a while, Nicole asked Mack to let her out of the group.

“She said that she couldn’t let me out no matter how hard I cried because it would show me that if I cried hard enough, I could get out of anything,” she testified.

Nicole stayed in DOS for more than a year after that conversation.

“He thinks DOS is a good idea and is a pro-woman group. He created it to have women have their own society … where men would play no role,” Agnifilo said.

Mack eventually gave her an assignment: Reach out to Raniere until he responds, Nicole said. Nicole emailed him multiple times, with no response.

“How do you get the attention of the smartest man in the world?” multiple messages from Mack to Nicole read.

Raniere eventually asked Nicole if she wanted to go on a walk. The two would have long, personal conversations.

One morning before a walk, Mack told Nicole to tell Raniere that Nicole would do anything he asked her to do. “Now, go be a good slave,” Nicole testified Mack told her.

At one point, Raniere lead Nicole into a home where he asked her to take off her clothes and commented on her body. Then, he had her put her clothes back on along with two blindfolds. She said one was so tight it left marks under her eyes. Then he led her to a car and drove her to a wooded area.

Nicole said she remembers being led into a small cabin with only a table. Raniere asked her to take off her clothes again, and tied her wrists and ankles to the table corners. Then, she felt somebody begin to perform oral sex on her. As she started processing what was happening, she heard Raniere start asking her questions about her sexual history.

“I realized there was another person in the room,” she testified.

She later found out that it was a woman who performed oral sex on her. CNN is not naming the woman, who prosecutors previously alleged Raniere had sex with when she was a minor.

Prosecutors say the entire incident was being videotaped, unbeknownst to Nicole. She said Raniere asked her if she was OK and she replied yes.

Raniere eventually took her back to the home where he blindfolded her and took the blindfold off and again asked her if she was OK. She said she was in shock but said yes.

“He said he wanted me to know that nothing bad had just happened, and that I was a young woman who was allowed to be sexual and I was not in a relationship so what happened was not bad,” Nicole testified.

Agnifilo has maintained that his client’s sexual relationships were consensual. Agnifilo asked Nicole if Raniere had been nice to her.

Nicole acknowledged that Raniere never yelled at her, adding, “He has other people do it.”

After the incident when Nicole was tied to the table, Raniere texted her, telling her he thought that she was “very courageous,” she testified.

Nicole said Mack eventually asked her to sign a contract saying she was a willing participant in the activities, and that she was aware of the risks of psychological or physical injury, “temporary or permanent disability including paralysis.” She never signed the contract and after leaving Nxivm in 2017, asked Mack for her collateral back, which she never received.

“Once I’d gotten enough separation, there’s not been one moment that I am not grateful that I am no longer in that situation,” Nicole testified.