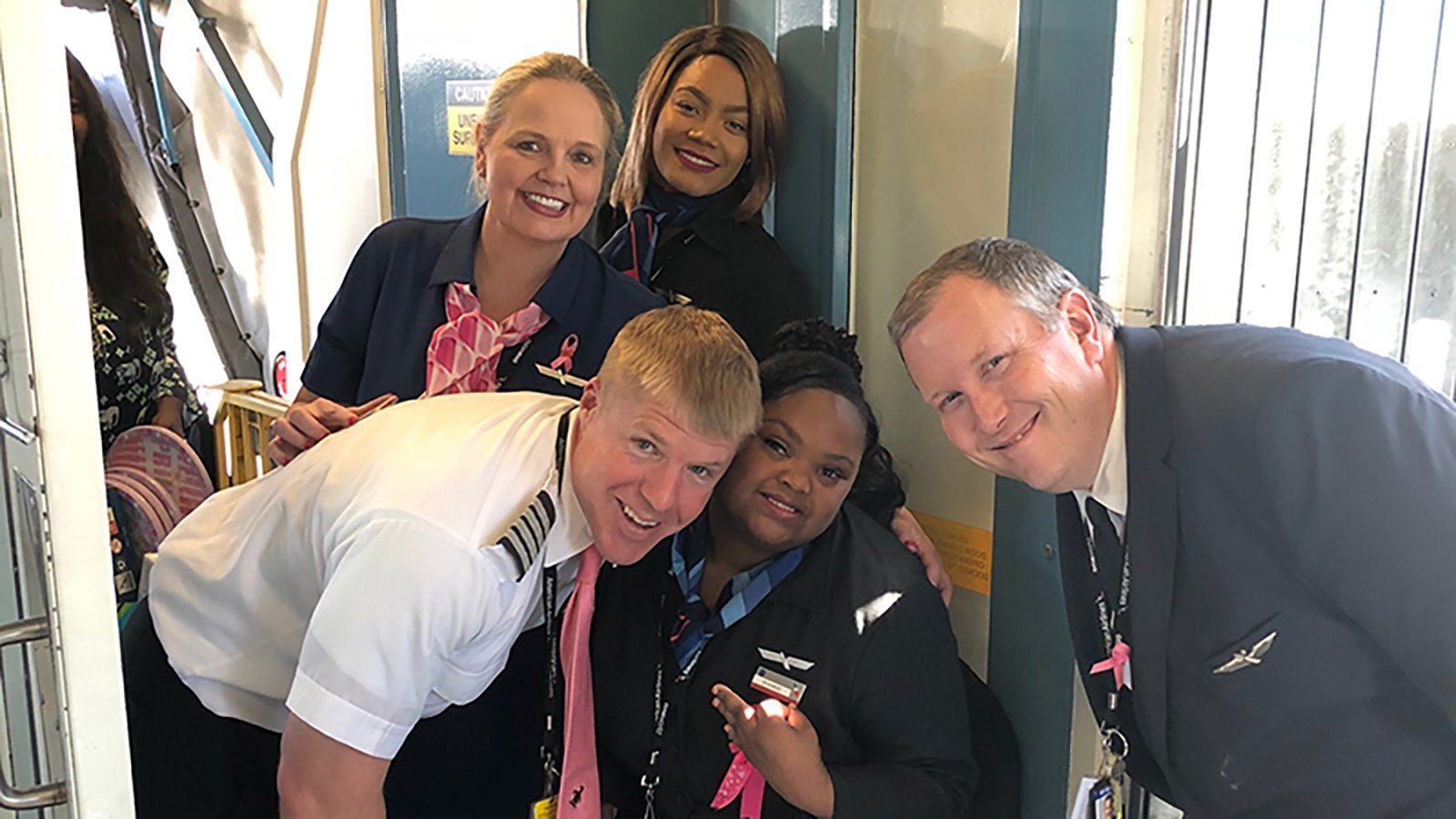 As a self-proclaimed “princess,” Shantell “Shannie” Pooser is comfortable in the spotlight.

But instead of a tiara or a ballgown, this 17-year-old prefers a pair of silver wings and a crisp, navy blue flight attendant’s uniform.

Since pinning on those wings and posting about her first flight on Facebook, she has become a symbol of hope for her community.

The airline honored Pooser with the role on her 17th birthday — a milestone doctors did not expect her to see. In addition to Down syndrome, Pooser was born with a rare, degenerative airway condition that hinders her breathing. Her physicians say it’s terminal.

A new love of flying

The teen developed a love of flying during trips between her South Carolina home and Ohio. She often travels to the Cincinnati Children’s Hospital Medical Center to receive lifesaving care.

One day, as Pooser and her mom made the trek from Cincinnati to South Carolina, the teen bonded with a flight attendant who gave her a pair of wings. On that trip, Miller-Berry noticed her daughter paying extra attention to the flight attendants’ instructions. She even started imitating them from her seat. When the safety briefing ended, she looked at her mom and said “So, how did I do?”

After the flight, Pooser met the pilot and toured the cockpit. That VIP experience sparked a new life goal: to become a flight attendant. “Planes became her obsession,” her mom explains.

Four months before her daughter’s 17th birthday, Miller-Berry decided to throw her daughter an airline-themed party.

The mother of five reached out to American Airlines, hoping to receive a few lanyards to complete the DIY projects she planned for her daughter’s party. But instead, the airline threw the teen an extravagant once-in-a-lifetime birthday bash, including the use of a CRJ-900 plane to host her party.

“The first-class section was filled with her special needs friends from school,” Miller-Berry said. All of Pooser’s friends and family were on board. Pooser also received a special visit from Columbia, South Carolina Mayor Steve Benjamin and a medallion to her city.

“Every flight we have been on since her birthday she has been in uniform and worked,” Miller-Berry says.

Although recognized by her passengers for her infectious personality and signature shimmy pose, Pooser’s mom says that behind her daughter’s bright smile is a heart-wrenching health history. Miller-Berry says her daughter was initially misdiagnosed with asthma and sleep apnea. “We were waking up at night to a blue baby — paramedics were always on standby,” Pooser’s mom said.

After years of frantic searching, they found hope at Cincinnati Children’s Hospital, one of three specialized medical centers that agreed to review Pooser’s case.

“I sent her files to 42 hospitals across the country. Three responded,” Miller-Berry says.

But the specialized health care was costly. Even with her daughter’s insurance, the family still didn’t have enough. Miller-Berry, a disabled veteran, says she and her husband have sold everything possible to afford her daughter’s health care needs. In 2015, when Pooser’s insurance initially denied payment for a life-saving surgery, the family went into overdrive to raise the funds.

“We sold our truck. We cut cable and got the TVs with the big backs on them and watched VHS tapes,” Miller-Berry said. “I cut all my hair off so I didn’t have to pay to get it done.”

Miller-Berry says she was desperate to save her daughter, and that she considered taking her own life so her family would gain access to a million dollar life insurance payout. She went so far as to write letters to her church and family members, first apologizing for her suicide and then instructing them on how to care for her critically ill daughter.

“(At that time) I’d rather sacrifice my own life for my young daughter, for a chance for her to live,” Miller-Berry tearfully explains.

“Money was the only factor preventing my daughter from living.”

In the end, the insurance company did pay for the surgery.

Related: She worried her son with autism would bother his seatmate on the plane. Instead, they became friends

At home in the skies

To date, Pooser has flown on 20 flights while in uniform. Although her honorary role does come with certain restrictions, once in the air, the young flight attendant is ready to serve. According to her mother, helping to pass out snacks is one of Pooser’s favorite duties.

“She’s so excited she doesn’t realize she has to give the passengers a choice,” Miller-Berry laughs. Instead Pooser offers passengers what she thinks is best.

“The passengers just laugh along with her and eat what she gives them,” she adds.

Miller-Berry says she is grateful for each day she can share with her daughter. Although specialists recently recommended hospice for Pooser, her mom is on a mission to fill her daughter’s life with as many exciting memories as possible. She has created a GoFundMe account to fulfill her daughter’s final wishes and lessen the cost of needed medical care.

Prior to her debut with the airline, Pooser began to actively fulfill items on her bucket list.

“I wanted to celebrate her life while she is still here so she could see the celebration.”

Among her completed bucket list items are finding a best friend; learning to ride a bike; riding a motorcycle; walking the stage at a graduation and getting a professional haircut at a salon.

On the day of her prom, she went on a helicopter tour, then went to the dance with a police escort. Last month, Pooser received a service dog, trained to alert others when she goes into respiratory distress. Miller-Berry says the dog has already helped save her daughter’s life three times.

Thanks to an Instagram connection, another one of Pooser’s biggest dreams came true.

This March, she and her mom were able to meet Pooser’s idol, first lady Michelle Obama.

Miller-Berry says her daughter fell in love with Mrs. Obama after she appeared on the Nickelodeon TV show, “iCarly.”

“She (Mrs. Obama) grabbed my hand … and told me how proud of me she was,” the South Carolina mom said. “That meant the world to me.”

After that meeting, Miller-Berry says her daughter stopped calling her “mom” and started referring to her as “Mrs. Berry,” because first lady Obama was her new momma. “That’s fine with me,” she laughs.

“She calls Tyler her uncle,” her mom laughs.

Although Pooser’s health is declining, Miller-Berry is doing her best to help her daughter complete her bucket list.

“The last two weeks she has stopped eating and she’s been in the hospital,” Miller-Berry says. “It’s scary for me.”

But she says her daughter is still mobile and would love to challenge the comedian Ellen DeGeneres to a dance battle on her show. She would also like to meet the singers Alicia Keys and Miley Cyrus.

Pooser still needs more surgery. Her mom says her airways are severely obstructed and that she has episodes where she can’t breathe.

As Pooser’s family braces for the outcome of the surgery, her mother looks forward to making sure her daughter’s life is lived to the fullest, no matter how much time remains.

“I want her to know just how incredibly special she is,” Miller-Berry says. “Not because of her special ability but for who she is as a whole — I want to celebrate her life now.”