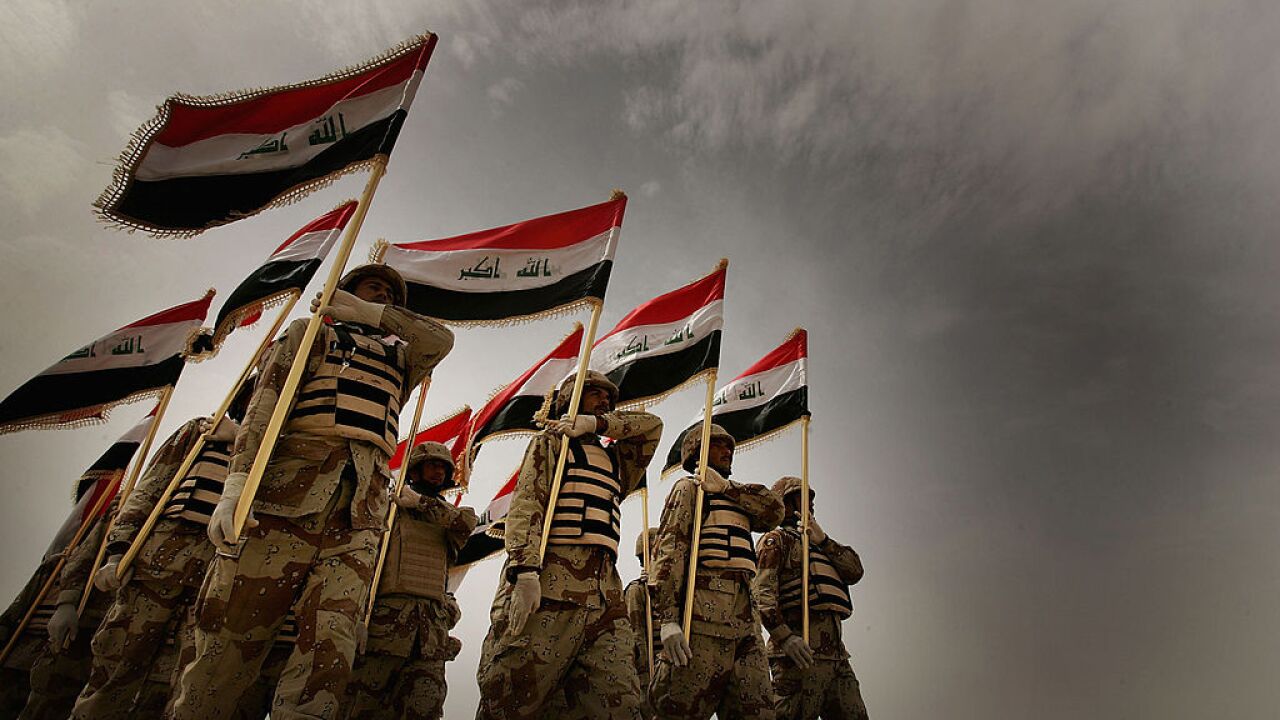 BESMAYA, IRAQ – MARCH 18: Iraqi army soldiers from the 4th Brigade of the 5th Division march with Iraqi flags during their graduation ceremony at Besmaya Range Complex on March 18, 2008, northeast of Baghdad, Iraq. The graduated Brigade is the first brigade to be fully equipped with equipment (M16s, M4s, tactical and non-tactical vehicles) purchased through Foreign Military Sales. Following graduation, this brigade will be moving out directly to their battle space in Diyala Province east of Baghdad, according to a press release by the U.S military. (Photo by Wathiq Khuzaie /Getty Images)

Photographs from an Iraqi jail that were leaked to Human Rights Watch have revealed extreme overcrowding in cells holding juveniles, female terrorism suspects and their children.

One of the pictures taken at the Tal Kayf detention facility in Iraq‘s Nineveh province and published by the international rights group on Thursday show young men curled on the floor in a cell so cramped they are unable to fully lie down. The prisoners’ limbs are intermingled; some rest their heads on the laps of other inmates. At least one man is seen sleeping with the legs of others sprawled over his torso.

In another photo from a female prisoners’ cell in the same facility, women sit on the ground, their clothes and belongings hanging off the walls. Children are also seen in the cell, with barely any space to move.

Human Rights Watch (HRW) said the photographs were shared with the group confidentially by an unnamed senior Iraqi penitentiary expert. CNN has been unable to verify if the photos are genuine.

An Iraqi rights group has corroborated the findings. “Unfortunately it is true,” Ali Akram al-Bayati, a member of the Independent High Commission for Human Rights of Iraq told CNN. “(It is) because of the large number of detainees and imprisoned persons, poor Iraqi infrastructure … corruption at the level of administration or staff in such places.”

The unnamed Iraqi penitentiary expert cited by HRW said Niniveh’s three pretrial detention facilities — Tal Kayf, Faisaliya, and Tasfirat — had a combined maximum capacity of 2,500 people. As of late June 2019, they were holding around 4,500 prisoners and detainees, according to the source.

Detainees have no space to lie down in their cells or sit comfortably, the expert said in comments published by the rights group.

“These prisons are meant to be a place for rehabilitation but if authorities house detainees in these kinds of conditions, I can only imagine what will happen to them after they are released,” the source said.

HRW said the conditions were “so degrading that they amount to ill-treatment.”

“The authorities should ensure that prisoners are not held in inhuman conditions and that there is a legal basis for detentions,” the organization said in Thursday’s statement.

The female and juvenile inmates in the photographs are terrorism suspects, according to HRW.

Iraqi authorities did not immediately respond to CNN’s request for comment.

International rights groups have regularly documented abusive conditions in Iraqi jails. A 2010 Amnesty International report alleged that up to 30,000 prisoners were being held without rights in Iraq, and frequently endured torture and abuse.

Last year, HRW said at least four prisoners have died in detention in Nineveh province, apparently due to a lack of proper medical care and poor conditions.

The dire prison conditions could serve to radicalize the detainees, it warned.

CNN has reported in recent months about an apparent resurgence of ISIS in Iraq just over a year after Baghdad declared victory over the extremist group.

“Concerns around overcrowding don’t solely affect the detainees, but also the community as a whole,” said Lama Fakih, acting Middle East director at Human Rights Watch. “The authorities should ensure that the conditions in Iraq’s prisons do not foster more grievances in the future.”