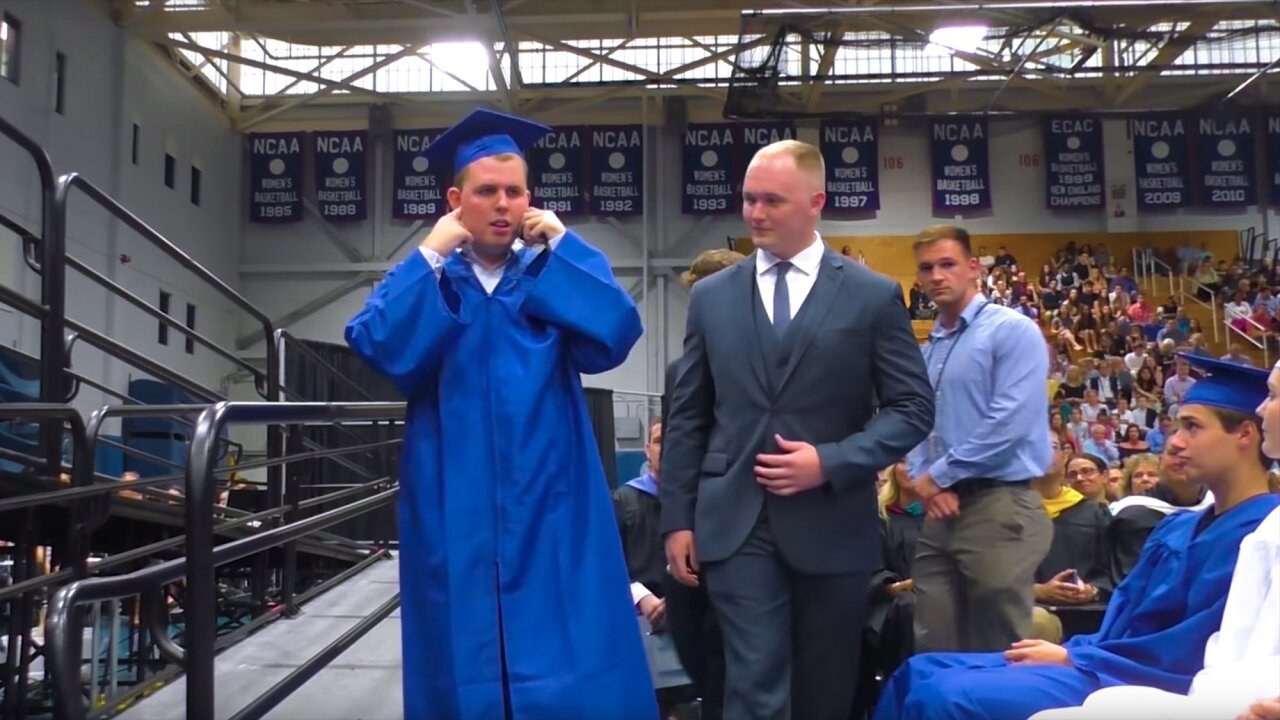 Jack Higgins was escorted to the stage by his brothers and an aide.

PUTNAM COUNTY, N.Y. – At his high school graduation, Jack Higgins approached the stage to receive his diploma with his fingers in his ears to block what he thought would be applause and cheers.

Instead, he was met by silence.

Higgins is a familiar face in the cafeteria, library, hallways and classrooms of Carmel High School, and he’s well-known there. He has a severe form of autism and is sensitive to noise. After eight years in the school’s program for students with cognitive, learning or behavior challenges, he was ready to graduate on June 20.

His parents, Barbara and Pat, wanted him to participate in the ceremony, and they approached his teacher Erin Appelle about it. However, there were concerns that he would be overwhelmed sitting for hours in a large auditorium surrounded by hundreds of people.

“In our school we have a banner as you enter all of our school buildings # WhatsBestforKids,” Lou Riolo, principal of Carmel High in Putnam County, New York, wrote in an email. “It sounds corny but makes sense. But in this case what was best for Jack?”

Jack Higgins was escorted to the stage by his brothers and an aide.

Riolo had an idea: have everyone sit in silence as Higgins walked across the stage.

Knowing that this was an important moment for Higgins, Riolo approached members of his staff, and they immediately bought in. Higgins’ parents were thrilled with the idea as well.

“It was important to pull this off,” Riolo said. “First off for Jack, second for his family who could experience the same event as every other parent or family whose child reaches this milestone was of great importance. Lastly to give the opportunity to everyone in that arena a chance to assist in making one young man’s and his families graduation dreams a reality.”

Students can often be unpredictable and rebellious, and getting everyone to agree would not be easy. But when people asked Riolo whether the staff thought they could pull it off, his answer was always yes.

“You often have to give people the opportunity to rise to an occasion,” he said. “I truly believe people have a kind, compassionate soul and they want to help and this was one of those occasions.”

Before calling Higgins to the graduation stage, Riolo asked everyone in attendance at Western Connecticut State University’s O’Neill Center to keep quiet and offer only a soft golf clap.

Flanked by his two brothers and school aide Rob Ancona, Higgins approached the stage with his fingers in his ears, but the loud noises he expected after weeks of practice runs with his teacher were nowhere to be heard.

He received a silent standing ovation.

“The students were amazing,” Riolo said. “They are a class act and superseded expectations. For example, them rising to their feet after Jack received his diploma was them. It was not preplanned and no one told them to act like that that. They felt compelled to show their support in that way. They made that amazing compassionate gesture on their own.

“I have been lucky and blessed to see some really remarkable things in my 31-year career, but this so far has to be the most incredible. But as much as the students rose to the occasion, so did Jack. Since Jack is very limited verbally, how overwhelming was it for him with a large crowd and expectation that it would be loud? It was so brave of him to take that walk, which must have seemed like forever, and he did it with grace, class and strength.”