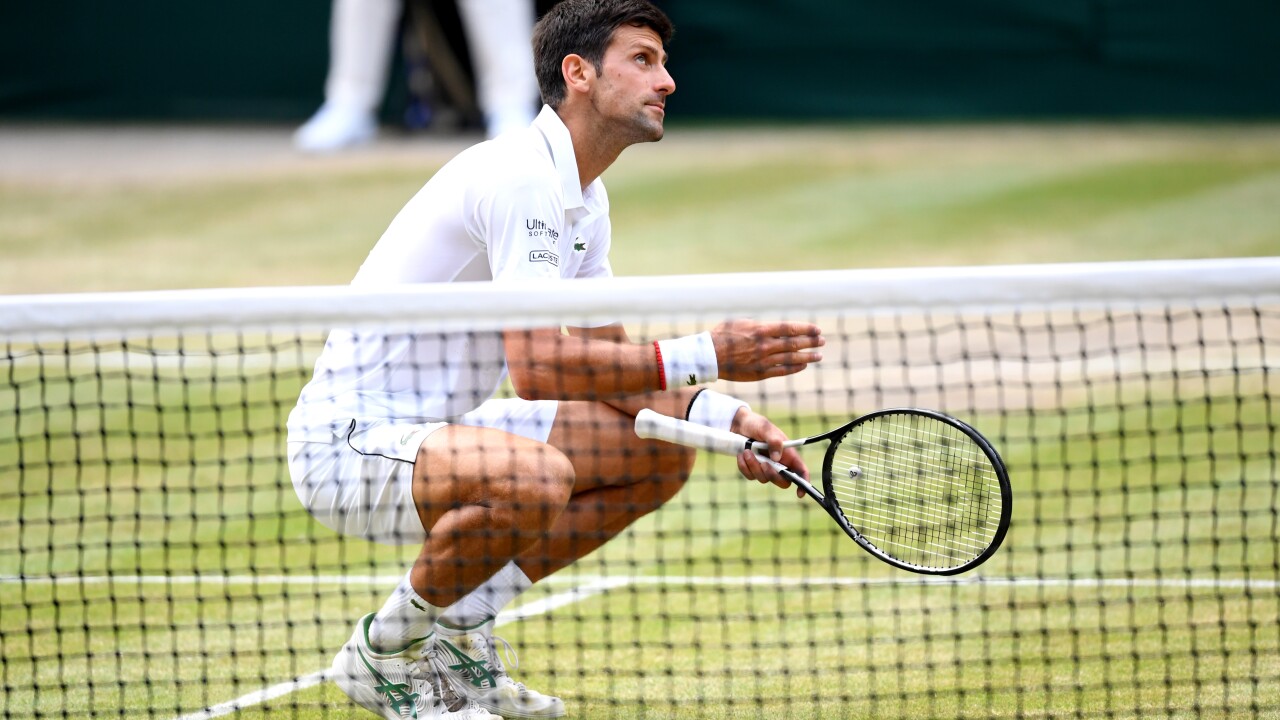 LONDON, ENGLAND – JULY 14: Novak Djokovic of Serbia celebrates winning the Men’s Singles final against Roger Federer of Switzerland during Day thirteen of The Championships – Wimbledon 2019 at All England Lawn Tennis and Croquet Club on July 14, 2019 in London, England. (Photo by Matthias Hangst/Getty Images)

Serbia’s Novak Djokovic poses with the winner’s trophy on the balcony of the club house in Wimbledon. (Photo credit should read DANIEL LEAL-OLIVAS/AFP/Getty Images)

Novak Djokovic largely went unnoticed most of this Wimbledon with everything else happening.

But the Serb has everyone’s attention now after beating Roger Federer in a gripping, historic final Sunday.

How did he celebrate his fifth Wimbledon crown? As usual, by eating the grass.

It was the first time the final set tiebreak was used in a finale at Wimbledon, having been put in place for this year’s edition after John Isner and Kevin Anderson slugged it out for around seven hours in last year’s semifinal.

A match for the ages…

The moment @DjokerNole retained his crown to become #Wimbledon champion for a fifth time after a historic men’s singles final#JoinTheStory pic.twitter.com/zDQlEBviMD

Djokovic had earlier saved the two match points on Federer’s serve at 8-7 in the fifth. It was a hat-trick of woe in that respect for the eight-time champion, who also saw Djokovic save match points against him in successive US Open semifinals in 2010 and 2011.

Federer might be kicking himself for that but also not finishing off Djokovic earlier. Indeed he could have won in three sets, having led the first tiebreak 5-3 and holding a set point in the third prior to the tiebreak.

For parts of the match, Djokovic looked out of sorts, though Federer’s attacking onslaught contributed.

Djokovic’s 16 majors have pulled the world No. 1 to within four of the Swiss for the first time ever.

The top of the list in this Big Three era reads like this: Federer on 20, Rafael Nadal on 18 and Djokovic on 16.

Federer has edged Nadal for years, with Djokovic moving into sole possession of third ahead of Pete Sampras by virtue of his title at the Australian Open in January.

Next year could see an even more seismic shift, especially if Djokovic gets to 17 at the US Open in September where he will be — as it currently stands — the substantial favorite.

Time is on his side, too. At 32, he is five years younger than Federer and one year junior to Nadal.

Djokovic hadn’t faced a top-20 player at Wimbledon this fortnight until Federer but ultimately handled the step up in quality to deprive the soon-to-be 38-year-old of a record-extending ninth crown at Wimbledon.

Federer last downed Djokovic at a grand slam in 2012, in the Wimbledon semifinals.

"When I was a boy… I used to make the trophies out of different materials in my room"@DjokerNole's childhood dream has become a reality for a fifth time…#Wimbledon pic.twitter.com/fpRYRIE9BA

Showing his class, Djokovic also hasn’t lost to Nadal at a grand slam — outside the Spaniard’s stronghold of Roland Garros — since 2013.

He may not be as popular as Federer and Nadal — not getting as much love in matches from fans irks Djokovic — but he is beating them regularly when it counts.

Djokovic held a 21-1 record against Federer when winning the opening set, the lone reverse coming in the Swiss’ second home of Dubai.

Serbia’s Novak Djokovic returns against Switzerland’s Roger Federer during their men’s singles final in the 2019 Wimbledon Championships. (Photo by WILL OLIVER / POOL / AFP) / RESTRICTED TO EDITORIAL USE (Photo credit should read WILL OLIVER/AFP/Getty Images)

You could call Wimbledon Federer’s home, too, given all his success at SW19 but there was no comeback on this occasion.

Djokovic’s 3-1 lead in the first tiebreak evaporated, with Federer storming back for a 5-3 advantage.

He did virtually all of the dictating, often neutralizing Djokovic with a backhand slice before letting rip on both his forehand and backhand.

But two forehand errors made it 5-5 and Djokovic’s excellent approach shot forced a passing error for 6-5.

A backhand wide sealed the set.

Instead of ripping through Federer, a sloppy Djokovic was broken to start the second after a slip on the grass.

The second set disappeared in 25 minutes, just what Federer wanted following the 58-minute opener — and playing three hours against Nadal in the semifinals.

It mirrored Friday, when Federer claimed the first set in a tiebreak, then faded in the second.

A lethargic looking Djokovic somehow hung on in the third set despite missing serves by yards and seeing his serve percentage drop. Barely.

With Djokovic serving at 4-5, 30-all, Federer produced a stunning drop volley to earn a set point, only for it to be erased thanks to a fine Djokovic serve.

Djokovic almost let slip a 5-1 edge in the ensuing tiebreak. Federer pulled to within 4-5 but could he have chosen a better shot on that pivotal point instead of a backhand drop shot early in the rally that went wide?

Djokovic quietly fist pumped in winning a 23-shot rally in the tiebreak though didn’t celebrate when the set ended. He knew it was a pro-Federer crowd.

If you were expecting Djokovic to finally take control, it didn’t happen. Djokovic appeared to be swinging more freely but a costly double fault at 2-2, 15-all, then a Hawk-Eye challenge that went in Federer’s favor opened up the door to a Federer break. It was soon 5-2 and that second break was pivotal, since Djokovic got one back at 2-5 despite Federer winning an epic 35-shot rally.

Federer didn’t face a break point until that game.

Federer, however, closed it out with ease on his second chance and the crowd erupted in cheers.

Djokovic manufactured the first break chances of the fifth at 2-1, only to see Federer withstand the pressure.

Djokovic’s erratic play continued, as he went from 40-0 to deuce in the next game before holding for 3-2.

He broke through for 4-2 only to concede serve straight away.

Djokovic dived like his former coach Boris Becker to aid in holding for 6-5, with the Serb asking chair umpire Damian Steiner when the tiebreak would arrive.

Djokovic dropped serve from 30-0 to trail 8-7 and looked out of it when Federer led 40-15. But Djokovic forced a forehand miss then came up with a forehand pass.

A Federer forehand into the net on break point led to groans.

On to the tiebreak it went after Djokovic saved two break points at 11-11 — when he led 40-0 — and he played a flawless tiebreak to seal victory, the epic ending on a Federer forehand mishit.