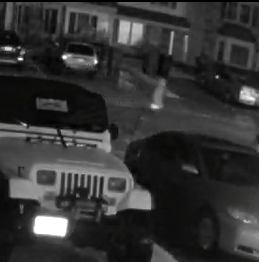 VIRGINIA BEACH, Va. – The Virginia Beach Police Department released surveillance videos in connection with a May shooting on Johnstown Lane that left a person in critical condition.

According to police, on May 11 at about 9:45 p.m., the suspect started a verbal argument with the victim. The suspect became angry enough to shoot the victim twice in the chest, then fled on foot towards Halifax Drive.

Police say the suspect was identified as a black male.

The first picture has the suspect in the middle of the frame, very blurred. The second picture is a possible vehicle involved in the incident.

“The pictures in this entry are not going to solve this crime, but your knowledge of events still might,” police said on the Crime Solvers website.

If you or someone you know has information in this case leading to an arrest, take action and call the Crime Line at 1-888-LOCK-U-UP. You can also submit a tip using the P3Tips app.