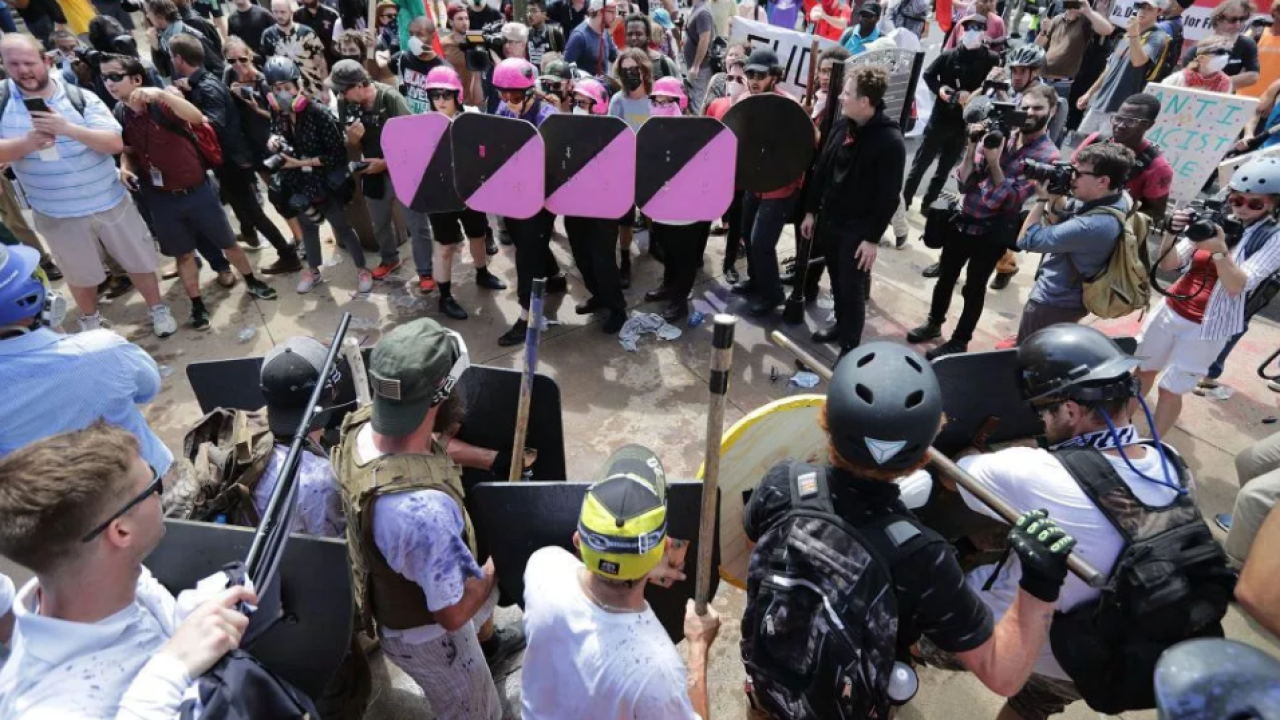 CHARLOTTESVILLE, VA – AUGUST 12: Battle lines form between white nationalists, neo-Nazis and members of the “alt-right” and anti-fascist counter-protesters at the entrance to Lee Park during the “Unite the Right” rally August 12, 2017 in Charlottesville, Virginia. After clashes with anti-fascist protesters and police the rally was declared an unlawful gathering and people were forced out of Lee Park, where a statue of Confederate General Robert E. Lee is slated to be removed. (Photo by Chip Somodevilla/Getty Images)

Three members of a white supremacist group were sentenced to prison Friday for kicking, choking and punching multiple people during the 2017 “Unite the Right” rally in Charlottesville and other rallies in California.

The three were members of the California-based militant white supremacist organization “Rise Above Movement.” The group no longer exists, according to the attorney’s office.

A fourth defendant, Cole Evan White, will be sentenced at a later date, the attorney’s office said.

“These defendants, motivated by hateful ideology, incited and committed acts of violence in Charlottesville, as well at other purported political rallies in California,” U.S. Attorney Thomas T. Cullen said.

“They were not interested in peaceful protest or lawful First Amendment expression; instead, they intended to provoke and engage in street battles with those that they perceived as their enemies.”

The three men sentenced attended two rallies in California prior to the August 2017 Charlottesville rally, during one which Daley and Miselis assaulted protesters, according to the attorney’s office.

In August 2017, the three men were in the crowd when violence erupted on the University of Virginia campus and Daley punched multiple people, the office said.

They were among the most violent

“The sentences imposed today demonstrate the U.S. Government’s intolerance of the use of violence, by anyone, to infringe upon the right of others to assemble peacefully,” Special Agent in Charge David W. Archey of the FBI said Friday.

A criminal complaint filed in October accused the four men of traveling from California to Charlottesville for the rally “with intent (a) to incite a riot, (b) to organize, promote, encourage, participate in, and carry on in a riot, (c) as having ‘participated in violent encounters in Charlottesville.'”

The complaint called the men “among the most violent individuals” at the Charlottesville rally.

Photo and video footage in the complaint showed White apparently head-butting a man in a clerical collar and a female counterprotester. The woman suffered a severe laceration.

Gillen, Daley and Miselis are shown assaulting multiple counterprotesters, the complaint said. In other photos, some of the men are seen apparently kicking and slamming counterprotesters to the ground.