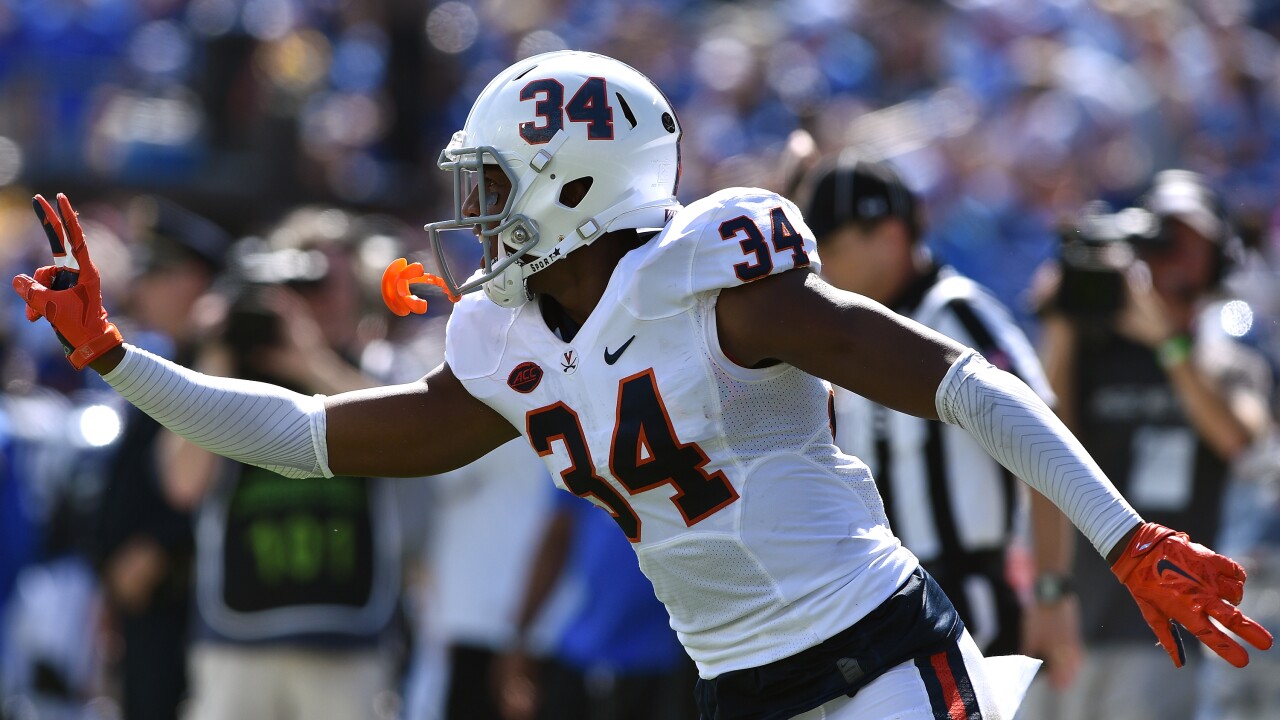 Bryce Hall #34 of the Virginia Cavaliers reacts after an intercepting a pass. (Photo by Lance King/Getty Images)

With 122 votes at the cornerback position, Virginia’s Bryce Hall was the top vote-getter among defensive players, and the lone Cavalier on the list.

Preseason honors were determined by a vote of 173 media members credentialed for last week’s ACC Kickoff in Charlotte, North Carolina.

Lawrence started the final 11 games in 2018 as a true freshman, helping Clemson become the first college football team in the modern era to go 15-0. The Cartersville, Georgia, standout became the first true freshman since 1985 to lead his team to the national title as he completed 259 of 397 passes for 3,280 yards with 30 touchdowns and just four interceptions. The Tigers won each of their final 10 games by 20 points or more.

Lawrence received 161 votes at the quarterback position to lead all players in the Preseason All-ACC Team balloting. Tiger teammates Tee Higgins (145 votes at wide receiver), Etienne (144 at running back) and John Simpson (136 at offensive guard) also placed among the overall vote leaders, as did Boston College’s Dillon (144). Dillon rushed for 1,108 yards last season and led the ACC in yards per game (110.8).

Miami placed three players on this year’s Preseason All-ACC team, followed by Boston College and Florida State with two each. Duke, Pitt and Virginia each had one player voted to the squad.

The defensive end slots include Xavier Thomas of Clemson and Robinson of Syracuse. Florida State’s Marvin Wilson and Clemson’s Nyles Pinckney were selected at the tackle positions.

Miami placed two players among the linebacker corps, where Shaquille Quarterman and Michael Pinckney are joined by Clemson’s Isaiah Simmons. Virginia’s Hall is joined in the defensive backfield by Clemson cornerback A.J. Terrell and safeties Tanner Muse of Clemson and Cisco of Syracuse.

ACC Player of the Year