What we know about the shooting in Philadelphia

A man who opened fire on officers attempting to serve a warrant in North Philadelphia was taken into custody early Thursday after an hourslong standoff that left six officers wounded.

Two officers and three other people who had been trapped inside the row house were evacuated by a SWAT team a few hours before the standoff ended.

Here’s what we know:

The shooting began when authorities attempted to serve a warrant at about 4:30 p.m. Wednesday in the Nicetown-Tiago neighborhood, in the 3700 block of North 15th Street, Philadelphia Police Commissioner Richard Ross Jr. told reporters during a news briefing Wednesday night.

“This was a narcotics warrant that went awry almost immediately,” Ross said.

Officers became trapped in different parts of the house when the shooting began, Ross said, adding that’s how two officers and three others got trapped in the house.

All five were evacuated by SWAT officers after nightfall, Ross said.

Authorities have not identified the suspect, saying only that he’s male.

The gunman continued firing intermittently at police — sometimes shooting out a window — for several hours during the standoff, Ross said.

Before the standoff ended, negotiators had been trying to communicate with the shooter, but he was only picking up the phone without answering, Ross said at one news conference.

After hours of ignoring efforts by police to communicate, the man’s attorney and Ross got on a call with him to try to assure him police were not going to harm him.

“We’re optimistic that means that he’s starting to understand that there’s some benefit of him coming out and surrendering,” Ross said.

The man was taken into custody around midnight, tweeted Sgt. Eric Gripp, a spokesman for the department’s public affairs office. 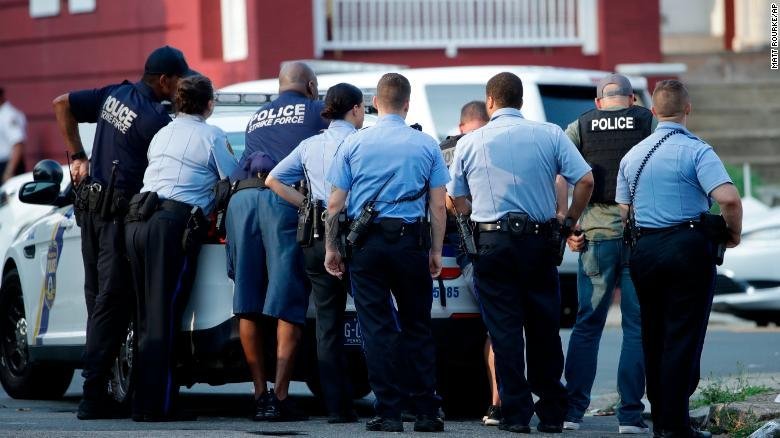 Six police officers were shot during the incident, the police commissioner said.

A bullet grazed one officer’s head, Ross said. None of the officers, who were not immediately identified, had life-threatening injuries. All six officers who were shot have been released from area hospitals, Gripp said on Twitter. He also said one other officer sustained injuries in a vehicle crash related to the incident.

Mayor Jim Kenney said he spoke with the wounded officers.

“I had the opportunity to speak to the six officers, they’re all in good spirits and obviously it was a very traumatic experience for them,” he said. “I was talking to one of the officers who had the graze wound to the head and he had two little boys — they looked like they were 9 or 10 years old, 8 or 9 years old — and kept on thinking about how their lives would have changed with just a little more difference in space.”

A day care center and a learning center near the house were evacuated, police said.

Parents whose children were at the Shake, Rattle & Roll Learning Center and the Precious Babies day care were asked to go designated location to be united, Gripp said.

Nearby streets were being evacuated, police said.

Temple University lifted an hourslong lockdown on its Health Sciences Center, a few blocks from the standoff.

But it warned its faculty, staff and students to steer clear of the neighborhood where the standoff was taking place, according to a tweet from the university.

What people are saying

“And if the state and federal government don’t want to stand up to the NRA and some other folks, then let us, let us police ourselves. But they preempt us on all kinds of gun control legislation,” Kenney said. “Our officers deserve to be protected and don’t deserve to be shot at by a guy for hours with an unlimited supply of weapons and an unlimited supply of bullets.”

President Donald Trump has been briefed on the shooting and is monitoring the situation, according to the White House.

In a tweet, former Vice President Joe Biden said he and his wife “send our prayers to the police officers injured today in Philadelphia, and to their families who wake up every day knowing their loved ones are walking into harm’s way when they put on a badge.”

Beto O’Rourke said the shooting was “a reminder of what police officers across America risk to serve their communities each day.”

“Thinking of Philadelphia, and everyone impacted by this gun violence epidemic we need to end,” he said on Twitter.

The Philadelphia Phillies tweeted a message of support to the police department.

“Our thoughts are with the members of @PhillyPolice injured today and everyone working to resolve the situation currently happening in North Philadelphia,” the baseball team said in a tweet.