Three tiny balls of fur huddle together for warmth inside a cardboard box. The baby cheetahs are just a few weeks old, but they’ve had a traumatic start to life.

A smuggler was attempting to spirit the cubs out of Somaliland, a breakaway state from Somalia, when he was caught red-handed by the authorities.

The cubs, who will soon be taken to a safehouse, are the lucky ones. Some 300 young cheetahs are trafficked out of Somaliland every year — around the same number as the entire population of adult and adolescent cheetahs in unprotected areas in the Horn of Africa, according to the Cheetah Conservation Fund (CCF).

The trend is of “epidemic proportions,” according to CCF, an organization devoted to saving cheetahs in the wild. At the current rates of trafficking, the cheetah population in the region could soon be wiped out.

Related: One million species threatened with extinction because of humans, scientists say

“If you do the math, the math kind of shows that it’s only going to be a matter of a couple of years [before] we are not going to have any cheetahs,” said Laurie Marker, an American conservation biologist biologist and founder of CCF.

Somaliland is the main transit route for cheetah-trafficking in the Horn of Africa. The animals are smuggled across Somaliland’s porous border, then stowed away in cramped crates or cardboard boxes on boats and sent across the Gulf of Aden towards their final destination: the Arabian Peninsula. 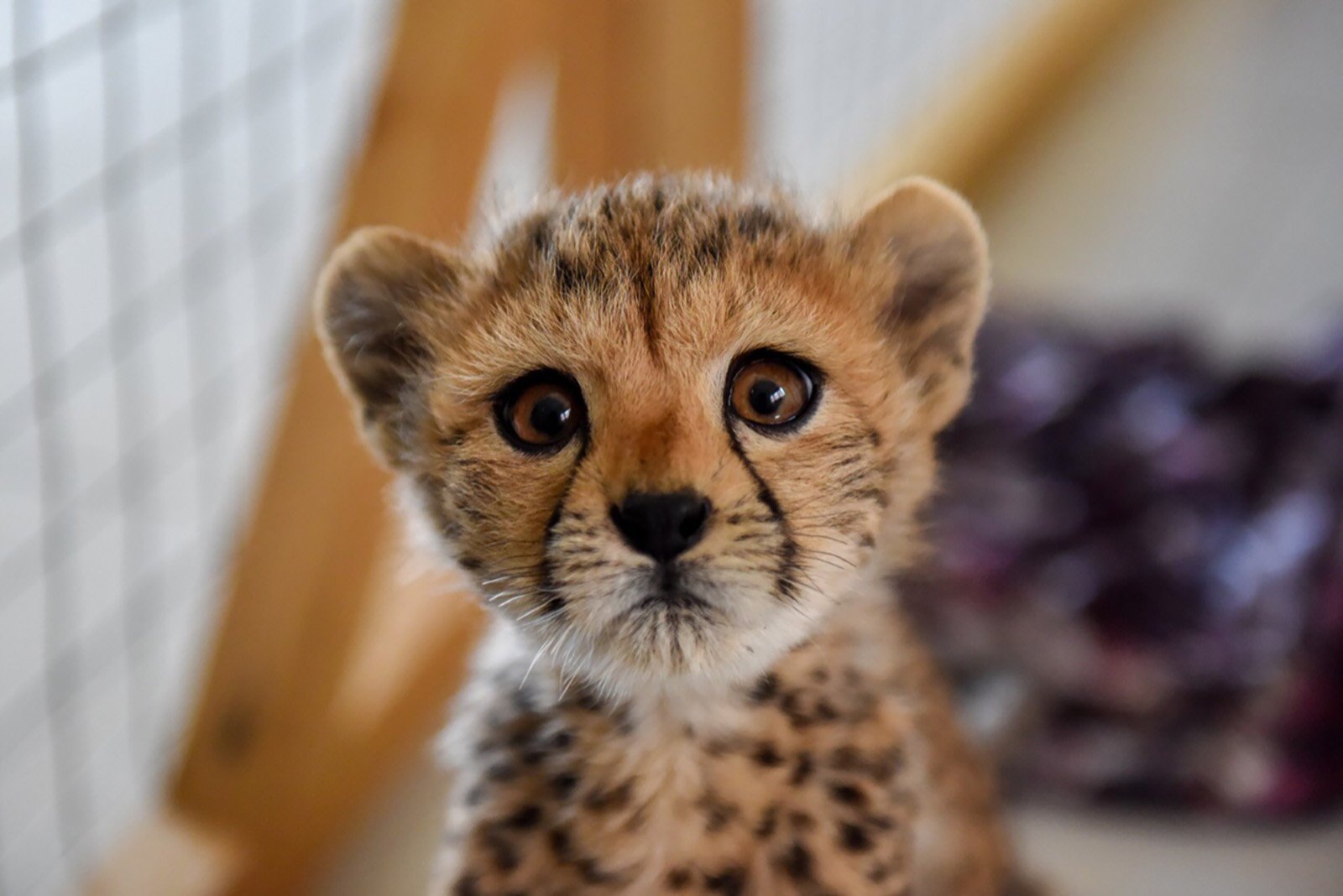 Status symbols for the rich

There are less than 7,500 cheetahs left in the wild, according to CCF. Another 1,000 cheetahs are being held captive in private hands in Gulf countries, CCF estimated, where many are bought and sold in illegal online sales.

While many of these states — including the United Arab Emirates and Saudi Arabia — ban the private ownership and sale of wild animals, enforcement is lax.

The overwhelming majority of these cheetahs end up in Gulf Arab mansions, where Africa’s most endangered big cats are flaunted as status symbols of the ultra-rich and paraded around in social media posts, according to CCF and trafficking specialists.

In one such post, a video shows a “pet” cheetah watching a National Geographic show and becoming visibly agitated when it sees one of its own on the screen. “She’s fixated on her family,” reads the caption. Other posts show cheetahs laying on luxury cars, being shoved into pools, getting force-fed ice cream and lollipops, and being taunted by a group of men. One cheetah is seen getting declawed; another is dying on camera.

For cheetahs, a life in confinement can be deadly, if the journey doesn’t kill them first. Many of the smuggled cubs arrive in the Gulf with mangled and broken legs after a rough journey. Three out of four cheetahs die during the trip, according to Marker.

As the world’s fastest land mammal, cheetahs need space to run and a special diet. Most Gulf owners do not know how to care for the cats, and the majority of captive cheetahs die within a year or two, experts told CNN.

“Those people who have cheetahs as a pet are causing the species to go extinct,” said Marker.

Veterinarians in Gulf countries confirm this grim picture. They spoke to CNN on condition of anonymity because of the sensitivity of the issue.

“(Cheetahs) do terribly in captivity,” said one vet, who has treated dozens of pet cheetahs over the past five years. Many of those he cared for did not survive.

The vet said he has seen cheetahs suffer from metabolic and digestive disorders because people don’t know what to feed them. He’s also come across cheetahs with stress-related diseases and obesity due to confinement.

Captivity is “a dead-end for cheetahs,” another vet said. The big cat is a delicate species, especially susceptible to feline and infectious diseases, the vet said.

In a statement to CNN, the UAE’s Ministry of Climate Change and Environment denied there were cheetahs in the country’s private houses and said that any cheetahs in the country were in “licensed facilities.” The ministry also said it routinely tracks online advertisements for the sale of endangered species, removing 800 such sites so far.

But CNN has seen a number of Emirati social media posts featuring pet cheetahs in recent weeks, and veterinarians told CNN they’ve treated dozens of cheetahs in private captivity, though they said numbers have gone down over the last several years. One vet credited the rescues in Somaliland, tighter controls at the borders in one emirate, and more rigorous e-commerce policing for the drop.

Most of those sales were conducted on Instagram and YouTube. While advertisements for those sales have been recorded in 15 countries, more than 90% of them originated in Gulf nations — with 60% of those in Saudi Arabia.

The three top sellers of pet cheetahs globally are based in Saudi Arabia, according to CCF, and those Saudi sellers posted one fifth of all advertisements.

“Whatever cheetah you want, you request, we will import. You want male, you want female. It’s not an issue,” the Saudi dealer told CNN over the phone.

The seller boasted that he had brought more than 80 cheetahs into the kingdom. He told CNN he had just sold out, but that he could deliver a cheetah within 25 days.

“From Africa … we import through a website with a guy, and we have another Saudi trader. He gets them for us. He buys them in cash and ships them to us immediately,” he explained.

The seller spun a tale of the cheetahs being brought up in good conditions on farms. He recommended feeding them chicken, something that veterinarians say causes health problems.

He said cubs aged around two or three months were on offer, as were older cheetahs. Anything was possible, he said, for prices starting at 25,000 Saudi Riyals ($6,600). He said he does discounts orders of more than one cheetah.

Other sellers CNN found online were selling for more than $10,000 per cheetah.

The Saudi government did not respond to CNN’s repeated requests for comment.

Trading cheetahs is prohibited under Appendix 1 of the Convention of International Trade of Endangered Species (CITES). Still, wildlife trade is a big business, and the seller CNN spoke with was likely part of a larger trafficking ring, according to law enforcement and trafficking experts.

Wildlife trafficking is estimated to be worth up to $20 billion per year, according to the UN and Interpol, and is among the top five illicit industries globally, along with drugs and human trafficking.

Illegal live animal trade used to predominantly take place on Facebook and Instagram, but Facebook has doubled down on finding abusers, says Crawford Allan, a wildlife trafficking expert with TRAFFIC at the World Wildlife Fund.

Facebook relies heavily on automated algorithms to detect prohibited content. They also have at least 5,000 manual reviewers, although the majority deal with other types of issues, such as terrorism and child abuse, rather than wildlife, according to Allan.

They are among a number of social media, tech and e-commerce companies joining the WWF’s Coalition to End Wildlife Trafficking Online, pledging to reduce online trafficking by 80% by 2020.

“Our Community Standards do not allow for the sale of endangered species or their parts, and we remove this material as soon as we are aware of it,” a Facebook company spokesperson said in a written statement. Facebook is the parent company of Instagram.

There has been some success taking down illegal ads for wildlife, with eBay removing 100,000 illegal wildlife ads over two years, according to Allan. But policing the practice is challenging, and criminals adapt to changing surveillance methods on the internet.

“There are enough places to hide on the open web,” Allan said.

Racing to save the cheetah

Somaliland is one of the least developed parts in the world, and poverty is pushing people to engage in this illicit and highly lucrative trade. But its government says it has prioritized cracking down on wildlife traffickers in the last couple of years.

At CCF’s shelter in Somaliland, 32 rescued orphaned cheetahs are cared for at a safe house now bursting at the seams. The harsh reality of the cyber-trade is evident here. By the time rescued cubs arrive at the shelter, they’re barely alive.

International staff and volunteers are rushing to build a bigger shelter, eventually releasing cheetahs into a wildlife sanctuary.

“I love them so much I don’t even see my mom once a week,” said veterinary student Neju Jimmy, who lives at the shelter and is the cheetahs’ main caregiver.

Costs are climbing, she said, as more cats are brought to the shelter. Expenses currently total $10,000 a month, says CCF’s Marker.

Somaliland’s environment minister, Shukri Haji Ismail Bandare, said there was only so much authorities could do to stop the source of the trade. “We have to be stopping the demand from the Arab countries,” she told CNN.

Marker has called on the leadership of those countries to raise public awareness on the issue.

“We really need influencers, we need the governments, the kings, the princes, or the queens to actually say this is not right,” she said.

“If we can save them, we are going to give them the best life that they can have, but they shouldn’t be in our care. They should be in the wild.”