Four of the bodies were recovered Monday and have yet to be identified, something Santa Barbara Sheriff Bill Brown — who also acts as the coroner — said will take some time. Four other victims were spotted at the bottom of the ocean “in close proximity” to the boat, named the Conception.

“Our hearts go out to the families of the victims of this terrible tragedy,” Brown said.

There were a total of 39 people on board — 33 passengers and six crew members, said Coast Guard Capt. Monica Rochester. Twenty-six people are missing.

“We all should be prepared to move into the worst outcome,” she told reporters.

Good Samaritans were able to save five crew members, who were awake in the main cabin and jumped off the fully engulfed boat, Rochester said. The passengers were below deck in the berthing area that’s primarily used for sleeping, the Coast Guard’s Aaron Bemis told CNN.

“The report that we got is that they were trapped by the fire,” Bemis said. “The fire was so intense that even after it was put out, we’re not able to actually embark the vessel and look for survivors at this point. It’s still ongoing.” 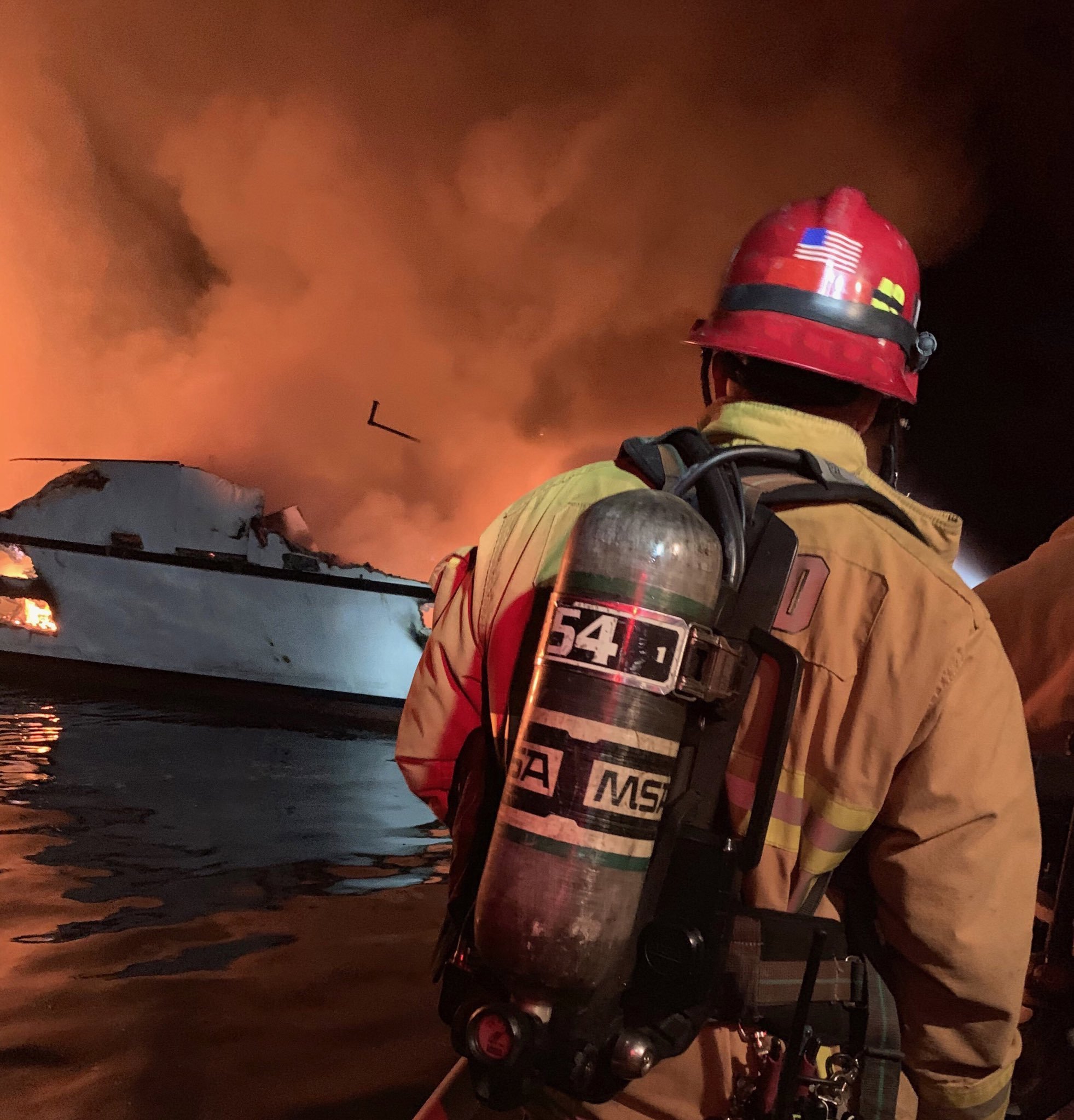 A mayday call revealed one side of the harrowing discussion between a Coast Guard dispatcher and the Conception’s captain. Only the dispatcher’s words were captured, but it provides insight into the panic the captain was experiencing.

After the captain apparently reports a fire and provides a location, the dispatcher is heard saying, “And there’s 33 people on board the vessel that’s on fire, they can’t get off? … Roger, are they locked inside the boat? … Roger, can you get back on board and unlock the boat, unlock the door so they can get off? … Roger, you don’t have any firefighting gear at all? No fire extinguishers or anything?”

Later in the conversation, the dispatcher asks, “Was that all the crew that jumped off? … Roger, is the vessel fully engulfed right now … Roger, and there’s no escape hatch for any of the people on board?”

Of the crew who were rescued, one suffered minor injuries. Four of them were being taken ashore, while the Conception’s captain has opted to remain on the scene, Coast Guard Chief Warrant Officer Josue Mendez said.

Rochester earlier said the vessel was in compliance with regulations.

The cause of the blaze is not clear. Authorities said there is no evidence of a criminal act at this point.

James Kohls was in Oxnard waiting to learn the fate of his brother, Mike Kohls, the gallery cook and a deckhand on the Conception. At 4 a.m., his brother, a lifelong surfer and father of one daughter, is typically making breakfast for the passengers, James Kohls said.

“It’s very surreal at the moment,” he told reporters. “They were going to let me know whether he was one of the survivors that got off.”

Firefighters had difficulty snuffing out the fast-moving fire, Bemis said. Each time it was extinguished, it flared back up — perhaps because of the fuel on board, he said.

The boat was about 20 miles off the mainland coast, near Santa Cruz Island in the Channel Islands National Park. Authorities are searching the islands’ shorelines for survivors, the Coast Guard said.

As firefighters worked to put out the blaze, the boat sank in 64 feet of water, Rochester said. The hull is inverted.

Conception is based out of Santa Barbara Harbor, according to harbor patrol officer Nathan Alldredge.

Authorities responded to a call for fire and rescue support in the Platts Harbor area of Santa Cruz Island before 4 a.m., he said. When they arrived, they found “at least 30 passengers on board and (the boat was) fully involved in flames,” Alldredge said.

According to Truth Aquatics website, which conducts boat charters, Conception left Saturday on a three-day cruise and was scheduled to return Monday afternoon. CNN has reached out to Truth Aquatics for comment.