People tried to talk slain Houston deputy out of joining the force, but he was determined to make a difference

Sandeep Singh Dhaliwal was sitting in a crowd at a gurdwara — a place of worship for Sikhs — on a winter day in 2008 when he first heard the call of duty.

It was soon after an encounter between a Sikh family and Harris County sheriff’s deputies had gone horribly wrong. The family had called to report a burglary, but when deputies arrived and saw their kirpans — small swords that are an Sikh article of faith — they treated the family as if they were the criminals.

Adrian Garcia had just been elected Harris County sheriff, and wanted to make things right with the Sikh community. So he visited the neighborhood’s gurdwara and made a plea: Join the force to help change the department from the inside.

Dhaliwal turned to his father and said he wanted to join the sheriff’s department. Friends and family tried to talk him out of it.

“I thought he had lost his mind,” said BJ Josan, a childhood friend.

Law enforcement wasn’t a profession that Sikhs in Houston entered, Josan told CNN. Besides, Dhaliwal had other things going for him, like his trucking and pizza businesses.

But Dhaliwal’s mind was made up, his father, Piara Singh Dhaliwal, told CNN Tuesday. He was intent on making a difference in the city he grew up in.

And he certainly did. Nearly everyone in this part of Houston — where Dhaliwal, 42, was gunned down last week during a traffic stop — knew who he was. His turban and beard, markers of his Sikh faith, made him hard to miss.

Those closest to him want others to know that Dhaliwal was a child at heart, an exceptional spirit, a friend to everyone and, in the words of one colleague, “a damn near saint.”

“We’ve had many law enforcement officers who have paid a similar sacrifice and they were all good people,” said Garcia, the former sheriff, who hired Dhaliwal and is now Harris County Commissioner.

“But I want people to understand that the things that you’re hearing about Sandeep are absolutely true.” 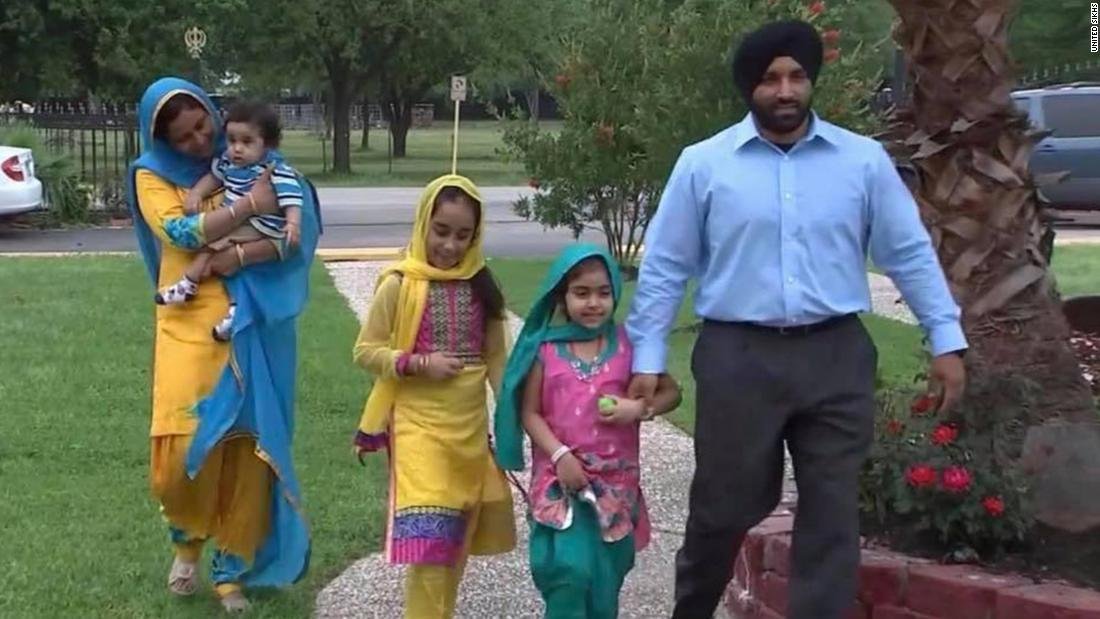 He wanted to be out on the street, not behind a desk

Piara Singh Dhaliwal said people in the community told him law enforcement was dangerous and that he should persuade Sandeep not to do it. But the father decided to support his son’s decision. Someone had to do the job, he said.

The younger Dhaliwal joined the force as a detention officer in 2009 and eventually worked his way up to deputy.

He was the first Sikh deputy in the Harris County Sheriff’s Office, one of the largest departments in the nation. When he got permission in 2015 to wear his turban and beard as part of his uniform, it made headlines as a victory for Sikhs everywhere — and paved the way for other Sikhs to join the department.

Serving in law enforcement as a turbaned Sikh had its challenges, but friends and colleagues say Dhaliwal never let on. He took pride in his role in law enforcement, knowing that he was representing the Sikh community in a very visible way.

“He wanted to show that a Sikh person with a turban is a symbol of someone who’s there to provide service, to provide help whenever you need it,” Josan said.

And it was his nature to defuse any strange look or rude question with a smile or a joke.

Garcia and others in the department encouraged him to make rank — to seek a promotion that would earn him more responsibility and pay. The deputy’s father, Piara Singh Dhaliwal, told CNN his son had actually passed the exam to become a sergeant.

But Dhaliwal didn’t want to sit at a desk and do paperwork. He was happy where he was — out in the community, interacting with people.

At a vigil for Dhaliwal on Monday night, Harris County Sheriff Ed Gonzalez recalled a resident telling him she was having trouble closing her garage door and needed to get to work. Dhaliwal told her not to worry and that he would keep watch over her house.

Normally, their paths wouldn’t cross. But on many nights when Spivey was patrolling the neighborhood, Dhaliwal would stop by to say hello.

“He’d just drive by in his personal vehicle in the middle of the night just to check on me,” Spivey said. Dhaliwal would tell him, “‘Hey, if you need anything, man, I’m just one call away.'”

Dhaliwal had a special connection with everyone, Josan said, but especially kids. He went out of his way to talk to them, to make them feel special. He wanted to inspire them and make them to feel like they could count on him.

“He knew how to interact with kids,” Josan said. “He was a big kid himself.”

‘He was always smiling’

In Copperfield, a residential community in northwest Harris County, nearly every yard this week displays a sad sign.

“Love One Another. In Loving Memory of Deputy Sandeep Dhaliwal,” they read.

On Tuesday members of the community, a mix of whites, Hispanics, blacks and Asians, kept stopping by a makeshift memorial for the fallen deputy. Scores of candles, bouquets of flowers and American flags dotted the tree-lined street near where Dhaliwal was shot.

Judith Aranda knelt and silently lit a candle. She first met Dhaliwal during a memorial for Deputy Darren Goforth, a Harris County deputy who was killed in 2015. Though Aranda said she talked to Dhaliwal only for a few minutes, she felt like she knew him from hearing her parents’ accounts of seeing him often at a nearby gas station.

“He was always smiling, always a friendly face,” Aranda said.

Papa Johns locations across southeast Texas pledged to donate proceeds from Tuesday’s sales to Dhaliwal’s family. But the response was so overwhelming, and the wait times to order pizzas so long, that the pizza chain announced it would extend its fundraiser to Friday.

It’s a sign of how beloved Dhaliwal was by the community, Aranda said.

Houston’s affection for Dhaliwal is now translating into support for his wife and their three young children.

Vigils in Dhaliwal’s memory have been held in New York, New Jersey, California and even Punjab, India, where Dhaliwal’s family is originally from. And congregations in gurdwaras as far away as Melbourne, Australia, have honored Dhaliwal in their ardas, a formal Sikh prayer that asks God for strength.

At the Sikh National Center in Houston, Piara Singh Dhaliwal sat on the ground Tuesday night, surrounded by friends who had traveled from around the country to pay their respects.

He was still in shock over the death of his son a few days earlier and struggled to summon the energy to talk about him.

“What I want to tell you, I don’t think I am able to say right now,” he said.

With a sad smile on his face, the elder Dhaliwal showed a photo on his iPhone lock screen. It was a black-and-white image of a toddler in a patka — a head covering worn by Sikh boys — with his parents on either side of him. His son.

The photo was taken in India, Dhaliwal said, before the family emigrated to Houston.

Soon enough a friend came up to him to offer his condolences.

“Your hero hasn’t gone anywhere,” the man told the deputy’s father. “Your hero lives on in everyone. Look at all the other heroes he inspired.”

Right on cue, the deputy’s youngest child wandered into his grandfather’s lap.

“Look at this hero,” Dhaliwal said about his grandson. “[Sandeep] gave me this little hero.”