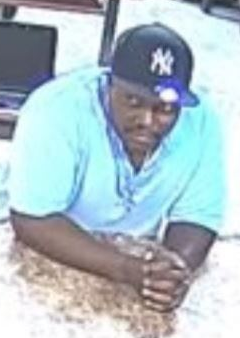 NORFOLK, Va. – Norfolk police are trying to identify a man they say is involved in a grand larceny that took place in the parking lot of Superior Pawn on Military Highway.

Around noon on October 16, police say the suspect was caught on surveillance cameras taking property from inside a vehicle that did not belong to him. The man left the area in a blue Jeep Cherokee.

The suspect is described as a black man, around 5-feet-8 inches tall, and weighing around 200 pounds. He was last seen wearing a light blue polo shirt, blue jeans, and white shoes.

If you recognize this man or know anything about this incident, call the Norfolk Crime Line.