Elijah Cummings lies in state at the Capitol

Congressional leaders honored the late Rep. Elijah Cummings on Thursday as his body laid in state in National Statuary Hall in the US Capitol.

Cummings, a longtime Maryland Democrat and key figure leading investigations into President Donald Trump, died last week at the age of 68. The congressman’s death prompted an outpouring of grief from lawmakers on both sides of the aisle.

Lying in state is a tribute reserved for government officials and military officers, while lying in honor is a distinction given to private citizens. Two African Americans have lain in honor: civil rights icon Rosa Parks and Officer Jacob J. Chestnut Jr., a Capitol Police officer killed in the line of duty.

The formal arrival ceremony Thursday took place in Statuary Hall, an expansive room that houses a collection of statutes contributed by individual states to honor prominent individuals in their history.

In her remarks, Pelosi referred to Cummings as “a master of the House” and “our North Star, our guide to a better future for our children.”

Pelosi described the late congressman as a generous mentor in the House in his role as Chair of the House Oversight Committee, saying, “When we were deciding committee assignments, he said give me as many freshman as you can, I love their potential, and I want to help them realize it.”

McConnell spoke of Cummings’ dedication to the city of Baltimore, saying, “Elijah Cummings did not just represent Baltimore. He embodied it. He celebrated its victories, sought to advocate for its needs and worked to heal its wounds.”

Cummings “climbed the ranks here in the Capitol, not because he outgrew his hometown, but because he was so committed to it,” McConnell said.

Schumer said that Cummings was “universally respected and admired in a divided time.” The Senate Democratic leader said that the late congressman inspired “us all to be better” and that his authority “came from the moral force of his life.” 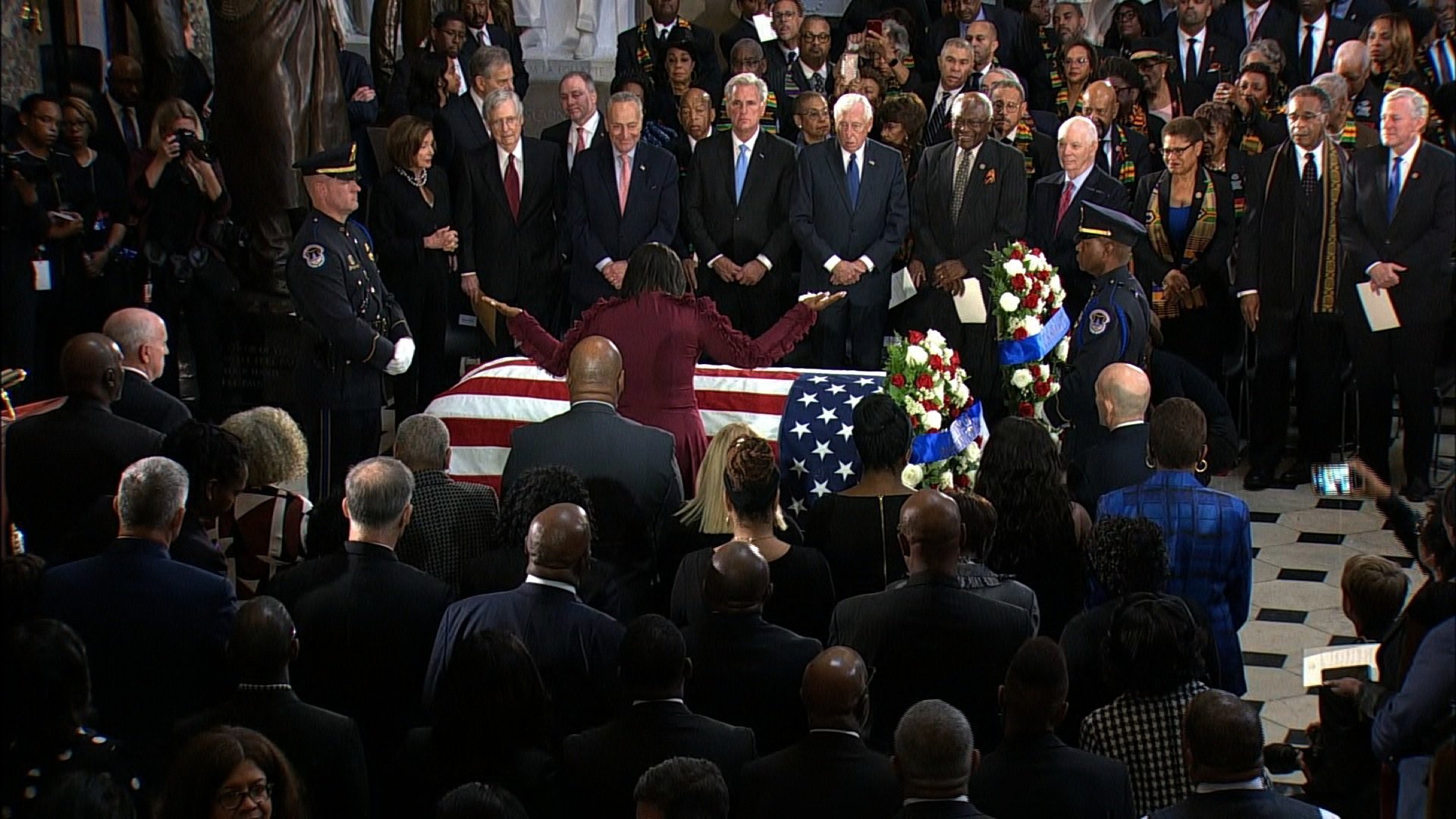 GOP congressman Mark Meadows of North Carolina was visibly emotional as he spoke, saying that he was “privileged enough to be able to call him a dear friend,” adding that some might find it to be “an unexpected friendship,” but “for those of us who know Elijah, it’s not unexpected or surprising.”

“Perhaps this place and this country would be better served with a few more unexpected friendships,” Meadows said. “I know I’ve been blessed by one.”

The top congressional leaders from both chambers — Pelosi and House GOP leader Kevin McCarthy as well as McConnell and Schumer — took part in a wreath laying.

There was also a performance by the choir for Baltimore’s Morgan State University, where Cummings served as a member of the board of regents.

A public viewing followed the ceremony with members of the public permitted to pay respects to the late congressman from 1 to 7 p.m. ET.

A funeral service will be held for Cummings on Friday at New Psalmist Baptist Church in Baltimore. According to a release from the late congressman’s office, speakers at the service will include former President Barack Obama, along with former President Bill Clinton and former secretary of state Hillary Clinton, as well as Speaker Pelosi.

A public viewing and celebration in honor of Cummings were also held Wednesday at Morgan State.

Pelosi appeared visibly emotional last Thursday as she paid tribute to Cummings after his death.

“He was a leader of towering character and integrity,” the Speaker said, “He lived the American dream. ”

Cummings was born and raised in Baltimore, the city that is home to his district. The son of former sharecroppers was born in 1951.

He practiced law and served for 14 years in the Maryland House of Delegates, where he became the first African American in Maryland history to be named speaker pro tem, according to his congressional website.

He had represented Maryland’s 7th Congressional District since 1996 and served as the chairman of the House Oversight and Reform Committee, one of the panels involved in the Trump impeachment inquiry.

In that role, Cummings oversaw a range of investigations into the administration, from issues relating to the impeachment inquiry to the treatment of migrants at the southern border.

As he led the investigative efforts, Cummings clashed publicly with the President. But despite being an outspoken and passionate defender of Democratic causes in Congress, Cummings fostered strong relationships with Republicans across Capitol Hill.

“Every time we spoke of selecting an individual who can rise to the occasion to be in debate with him, we would look for somebody who was strong, and every time someone was selected, they’d come back to be a very best friend of Elijah Cummings,” McCarthy said.

Cummings, who grew up during the civil rights movement, became a leading voice among African American lawmakers on Capitol Hill.

“He spoke truth to power, defended the disenfranchised and represented West Baltimore with strength and dignity,” Rep. Hakeem Jeffries of New York, the House Democratic Caucus chairman and a fellow member of the Congressional Black Caucus, tweeted last week. “Congress has lost a Champion. Heaven has gained an Angel of Justice. May he forever #RestInPower.”