Noor Alexandria Abukaram was disqualified because she was wearing a hijab, which doesn’t conform to uniform regulations.

The 16-year-old cross country runner at Sylvania Northview High School in Ohio said she knew something was wrong when she looked up at the board at the district meet on Saturday. Her name and time were not listed, she said.

“It was like your worst nightmare to have to compete and then find out that you got disqualified and it’s because of something that you love,” Abukaram told CNN on Thursday. “Why should you have to sacrifice your religion and a part of who you are to run, to do another thing that you’re very passionate about?”

Abukaram competes at Sylvania Northview because the private school she goes to doesn’t offer sports. The Bounty Collegium has an athletics affiliation with the school.

The junior has competed on the school’s soccer and track teams for two years and this year she made varsity on the cross country team. She said she has never been approached about her hijab violating the uniform code. It’s always something she thought could happen, she said, but it hadn’t yet in her three years of competing.

Related: Outcry leads to reversal for young swimmer disqualified from race for how swimsuit fit her body

The Ohio High School Athletic Association said in a statement that runners with religious headwear need to have a waiver to participate.

“Cross country runners may participate in competitions with religious headwear, provided the runner has obtained a waiver from the OHSAA and submitted it to the head official before the race, since it is a change to the OHSAA uniform regulations. The official was simply enforcing this rule since a waiver had not been submitted,” spokesman Tim Stried told CNN in a statement Thursday.

The school was in touch with the athletic association after the race and a waiver was submitted and approved, according to Stried. Abukaram can now participate in a regional competition happening next weekend. 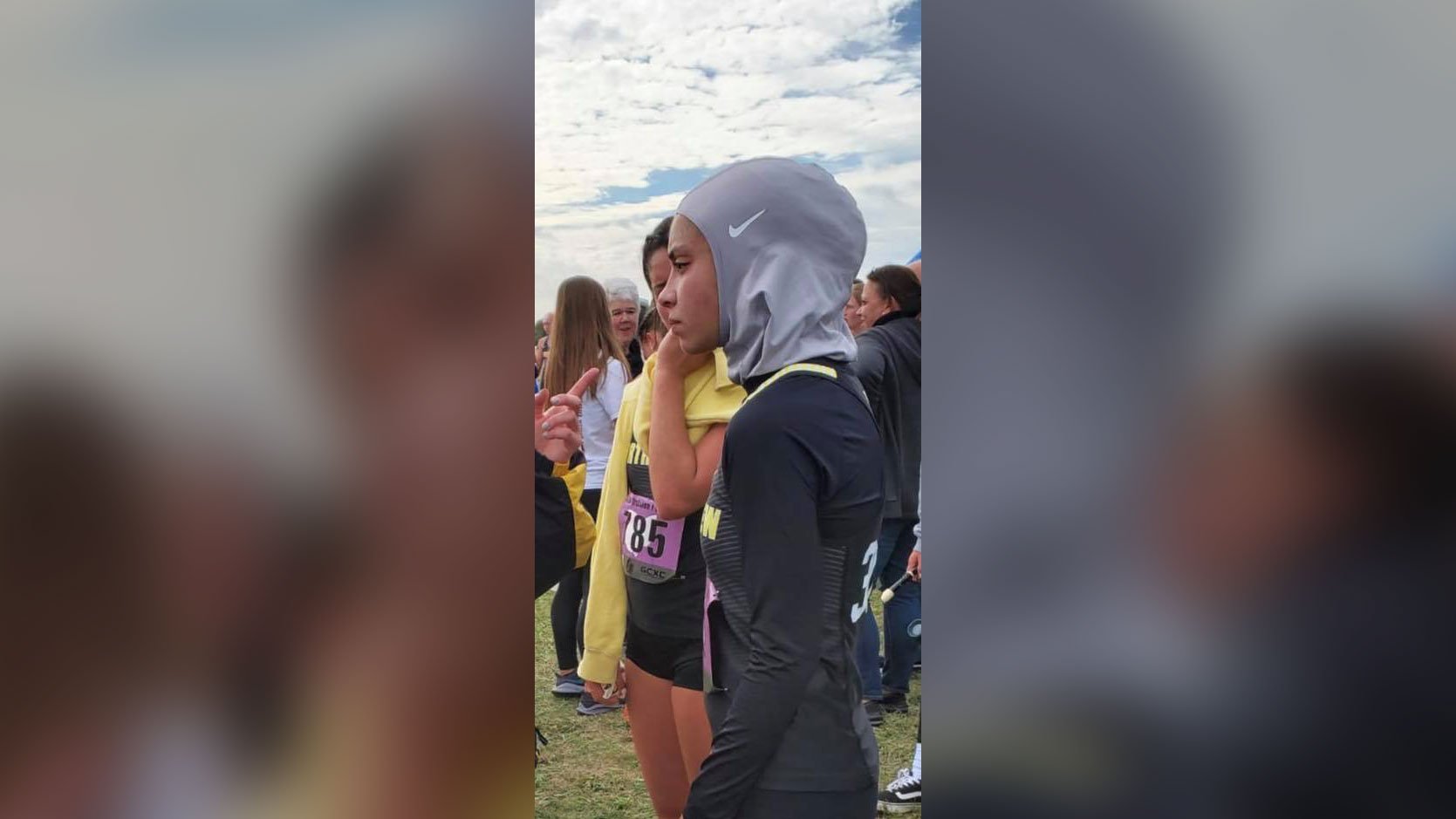 “The OHSAA is also already looking at this specific uniform regulation to potentially modify it in the future, so that religious headwear does not require a waiver,” the statement said.

Abukaram didn’t win the race, but she crossed the finish line of the 5K with an unofficial personal best. She ran it in 22:22, which is the time her coach clocked her at, she said.

She jubilantly hugged her teammates and her mother. This was a district meet and whoever did well would advance to a regional event next weekend. The team learned they made it to regionals and celebrated.

Abukaram said she thought it was just a mistake when she didn’t see her name on the time board. When she told her teammates, they stared at her blankly, she said.

“‘You got disqualified,'” one of the girls told her. When she asked why, they told her it was because of her hijab.

“When my teammates clarified what happened to me, it broke my heart,” she said.

Her father called her after the race from work, as he always does if he can’t make it, she said.

“I was sobbing,” the athlete said. “I couldn’t even explain how difficult it was to explain to my father that I got disqualified for my hijab. It was so hard for me because my parents have anyway been my No. 1 supporters when it comes to my hijab.”

Her hijab is a part of her that she doesn’t want to sacrifice to compete, she said.

“Personally, my hijab is like my nose. It’s so important and it’s a part of me,” Abukaram said. “The thought of not wearing it and of having to choose something other than my hijab, having to choose to do something else and having to warn people that me and my hijab are coming to this race is disgusting and disheartening.”

After the race, her coach, Jerry Flowers, was finally able to find her among the crowds at the meet. He apologized to her about the disqualification and was sorry her teammates were the ones to tell her the crushing news, he said.

It was the start of the state tournament and before this, the team had been in invitationals, Flowers said. He said he thinks the higher level of competition at the district level is what had officials looking harder at the rules.

“I think officials were instructed to be looking for certain things. At the starting line, when we got there 3 to 5 minutes before the race, the official notified me that I needed paperwork for an exemption for her hijab. I didn’t have one,” Flowers told CNN on Thursday. “He notified me she would be disqualified. I had the option to ask her to remove it or not run.”

Flowers, head coach of the girls cross country team at the school, said no one had brought up the hijab before the race. Abukaram and her older sister have run in races and competed in other school sports without anyone raising an issue, he said.

Her coach decided to have Abukaram run the race, as she had earned her spot on the varsity team and trained hard for the meet, he said.

“I knew that asking her to take it off is not respectful to her,” Flowers said. “I didn’t want to put her in the situation to make it seem like I was putting pressure on her to change who she is. I wanted her to run carefree. I figured she would race better if she didn’t know.”

Abukaram said she doesn’t blame her coach for not telling her before she ran in the race. Running is a mental sport and she said she understands why he didn’t pull her from the race 30 seconds before it began.

Since the disqualification last weekend, Flowers got the waiver letter approved and Abukaram will be competing in the regionals this Saturday. Her time at the race was disqualified, but the rest of the team qualified as a team.

She says both her coach and teammates have been incredibly supportive. “I have the best team in the world and I couldn’t ask for a better coach,” she said.

“I feel happy that I’m racing on Saturday and my time is going to count,” she said. “I’m happy to follow rules, but I don’t think that the whole letter thing and having to inform people that I’m coming is proper or respectful to myself.”