A Samsung device sent into the stratosphere to take space-themed selfies came back to Earth with a thud Saturday morning.

“This baby fell out of the sky and landed in our yard,” Nancy Welke said in a video posted to her Facebook page, showing the device overturned on a pile of leaves with its SpaceSelfie signage still intact.

Welke described the device as “still going and flashing” after it landed.

A Samsung spokesperson emailed CNN a statement saying no one was hurt when the balloon made an early soft landing in rural Gratiot County.

“Earlier today, Samsung Europe’s SpaceSelfie balloon came back down to earth. During this planned descent of the balloon to land in the US, weather conditions resulted in an early soft landing in a selected rural area. No injuries occurred and the balloon was subsequently retrieved. We regret any inconvenience this may have caused,” the statement said. 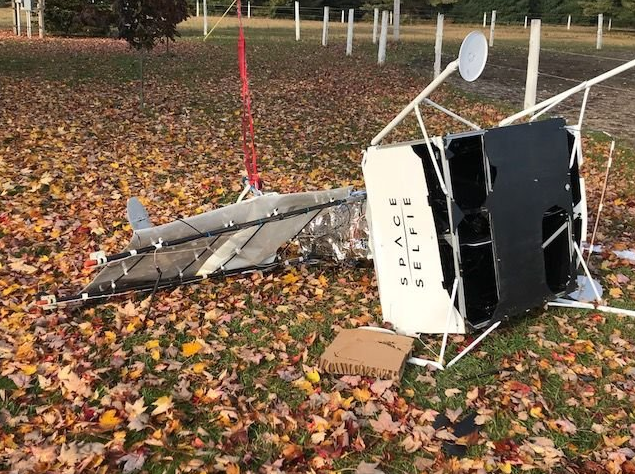 Gratiot County Sheriff Michael Morris said in a statement that a white hot air balloon also was discovered tangled up in some trees.

The sheriff’s office’s investigation determined that the Samsung SpaceSelfie was launched by a company called Raven Aerostar. According to their website, Raven Aerostar manufactures stratospheric balloons.

The balloon was used in a Samsung selfie campaign

Samsung used the balloon as part of their SpaceSelfie campaign starring actress and model Cara Delevingne, the company said in a news release posted online. The SpaceSelfie displayed user uploaded photos on a Galaxy phone screen with Earth as the backdrop.

Back on land, however, Welke thanked God in her Facebook video that the device didn’t hit her house and that they didn’t have their horses out.

It’s not clear whether Welke posed for any selfies with the device before the extraterrestrial property was reclaimed.