A teen whose birthday was Thursday went to his Southern California high school, pulled a pistol from his backpack and shot five classmates and himself in 16 seconds, authorities said.

Two victims — a 16-year-old girl and a 14-year-old boy — died at a hospital. Three students were wounded and taken by ambulance from Saugus High School in Santa Clarita, officials said.

Los Angeles County Sheriff Alex Villanueva said the 16-year-old suspected gunman is in critical condition. He used the last bullet from a .45-caliber pistol on himself, authorities said.

Authorities said they are looking into biographical information on the suspected shooter’s social media account that was taken down after the mass shooting.

“With a heavy heart, we’re going to move on with the investigation and figure out what went wrong,” the sheriff said. “I hate to have Saugus be added to the names of Columbine, Parkland, Sandy Hook, but it’s a reality that affects us all throughout the nation — something that we’re going to have to figure out.”

The shooting began before classes started, officials said, sending some students streaming out of the building as others hid. One student was hurt in the chaos and needed medical attention.

Video obtained at the scene clearly shows the suspect shooting his classmates and then himself, Capt. Kent Wegener of the Los Angeles County Sheriff’s Department told reporters.

He said there is no evidence yet that ties the alleged gunman to anyone who was wounded.

“I also want to acknowledge a posting on the bio of what we believe to be the subject’s Instagram account,” he said. “It says underneath his pseudonym: ‘Saugus have fun at school tomorrow.’ ”

Wegener said police confirmed it was the shooter’s account and it had been changed since the shooting. They are investigating to see who else had access to the account.

Authorities are working to obtain any other video from campus and cell phone video from students.

Emergency workers took several people out of the school on gurneys, and large groups of people walked out single-file with armed escorts, aerial footage from CNN affiliates shows.

The two students who were killed died at the hospital.

Officials shepherded students to nearby Central Park, where parents were told to meet them.

The shooting happened about 20 minutes before the start of school, according to Hannah de Caussin, whose daughter attends Saugus.

Some students fled, and others hid

Some students fled the building immediately, and others took cover inside rooms, another student told CNN affiliate KTLA.

Students are trained to take cover in classrooms, but she and some others ran out because they thought the shooter was near where they would have hidden, she said.

“We ran through the fence, luckily it was open, and we got as far away from campus as we could,” she said.

Another student, Brooklyn Moreno, told CNN affiliate KCBS that she was waiting for a bell to ring to signal her first class when she heard the first shot.

“Everyone thought it was a balloon, and it got really quiet. And then two more shots, and then everyone just ran out of the school,” said Brooklyn, who added that she ran across a street to someone’s house until someone came to pick her up.

Larry Everhart, a grandfather of a Saugus High student, told KCBS that he was leaving his house to get coffee when he saw students running down his street screaming.

“They were saying, ‘Can I come in your house?’ It was about 20 of them. I wanted to make sure they were safe, so I got them in there,” he said.

School officials are sending students to Central Park, where parents should meet them, the district said.

Everhart’s neighbor, a police officer, eventually told him he could go to the park, where he found his granddaughter safe.

“My granddaughter threw her arms around me and was hugging me, and I was just so happy she was still alive,” he said.

Vice President Mike Pence gave his condolences to families of the victims.

Speaking to a group at NASA in Northern California, Pence called it “another heartbreaking day for students and parents.” Pence pledged that the President Donald Trump will work to end gun violence.

“This administration will remain resolved to bring the scourge of mass shootings to an end, and we will not rest until we end this evil in our time and make our schools and our communities safe again,” he added.

Rumors of online threats are being investigated

Investigators will check rumors that the suspect may have posted threats on social media, county Undersheriff Tim Murakami said on Twitter.

“If you ever learn of posted threats please notify us ASAP,” Murakami wrote.

All schools in Santa Clarita’s William S. Hart school district were temporarily locked down as a precaution, but the restrictions were later lifted, the district said.

Saugus High School, about 30 miles northwest of Los Angeles, has about 2,400 students, according to the district.

Click here for our full coverage on the Saugus High School shooting. 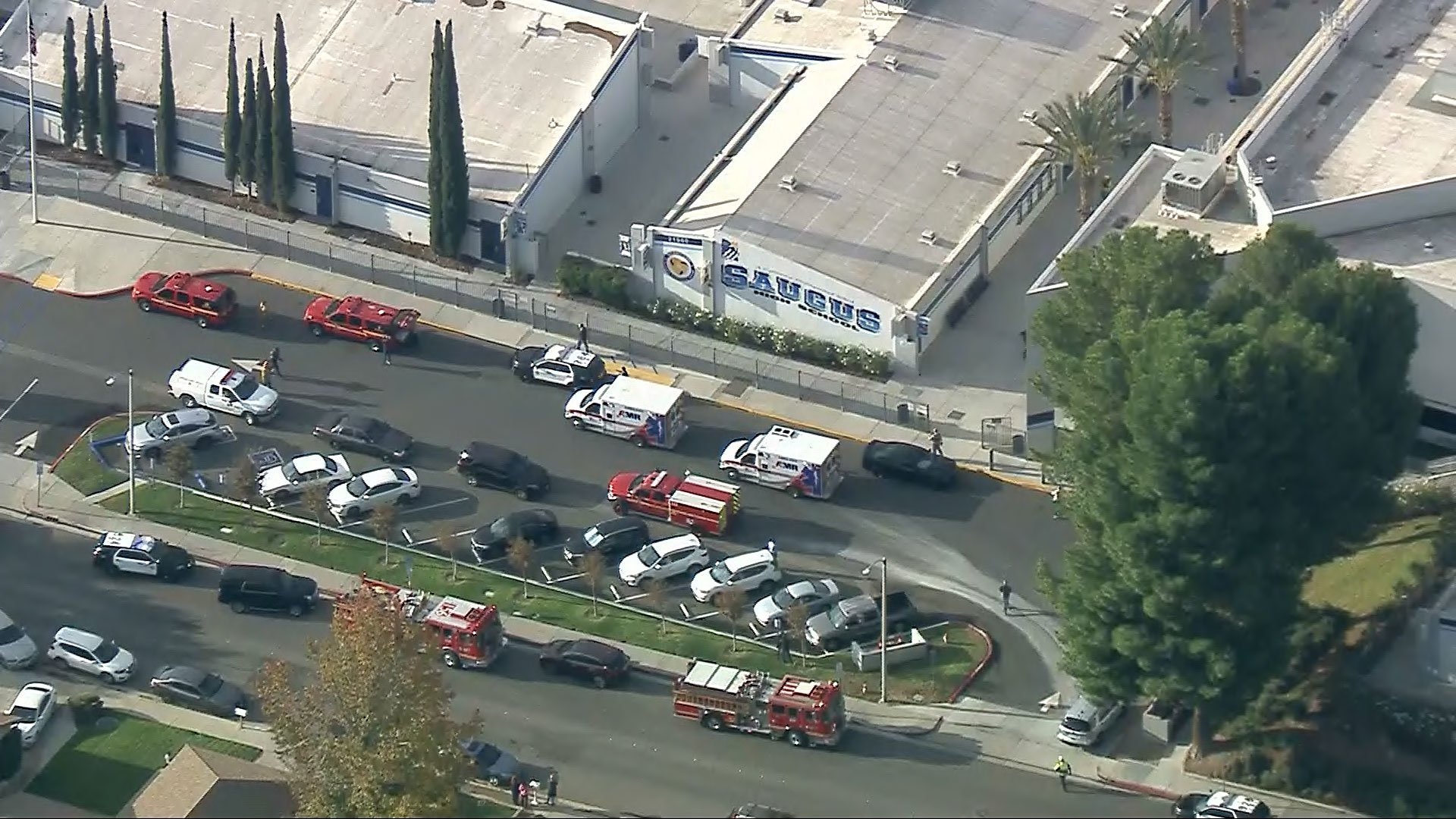