The ousted US ambassador to Ukraine testified Friday that she was “shocked and devastated” after learning that President Donald Trump had disparaged her in his July phone call with the Ukrainian President, while a tweet from the President attacking her during the impeachment inquiry hearing sparked a real-time response and new Democratic accusations of witness intimidation.

Trump tweeted as former Ambassador Marie Yovanovitch’s testimony was underway that “everywhere Marie Yovanovitch went turned bad,” which prompted a response minutes later from House Intelligence Chairman Adam Schiff, a California Democrat, who allowed Yovanovitch to react to Trump’s latest attacks. Schiff charged that the tweet was “designed to intimidate” her and other witnesses.

“Now the President in real time is attacking you,” Schiff said. “What effect do you think that has on other witnesses’ willingness to come forward and expose wrongdoing?”

The real-time back-and-forth playing out both over Twitter and in the House hearing room added fresh accusations to the second open House impeachment hearing, with several Democrats suggesting Trump’s intimidation could wind up in potential articles of impeachment.

After Yovanovitch’s hearing wrapped, Democrats received new evidence at a closed-door deposition, where David Holmes, an aide to Wednesday’s witness and US diplomat Bill Taylor, testified about how he overheard a phone call with Trump and US Ambassador to the European Union Gordon Sondland. Sondland told Trump the Ukrainian President would do “anything you ask him to” and that the Ukrainians would go forward with an investigation that Trump had requested in his July 25 phone call.

Yovanovitch, who testified that she had been removed from her post after a “campaign of disinformation” from the President’s personal attorney Rudy Giuliani, told lawmakers she felt threatened when she learned that Trump had said on his July 25 call with Ukrainian President Volodymyr Zelensky that she was “going to go through some things.”

“I was shocked and devastated that I would feature in a phone call between two heads of state, in such a manner where President Trump said that I was ‘bad news’ to another world leader and that I would be going through some things,” Yovanovitch said. “It was a terrible moment.”

While Yovanovitch’s testimony is not directly tied to the freezing of aid and dangling of a White House meeting amid a push for Ukraine to open investigations into Trump’s political opponents, Democrats say her removal marks the start of the shadow diplomacy campaign that sparked their impeachment inquiry into Trump and Ukraine. 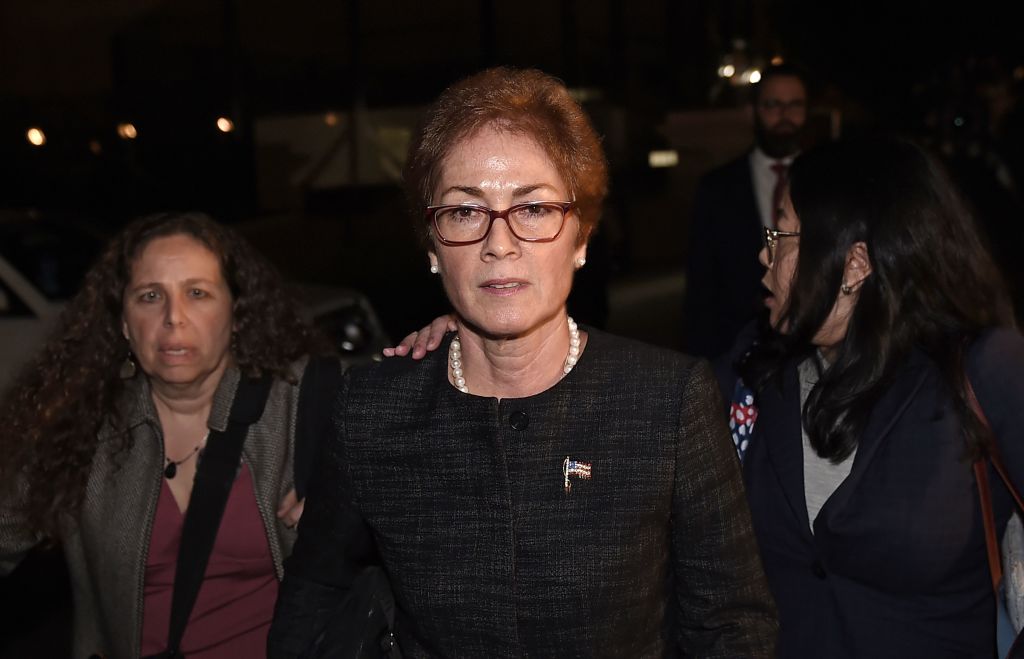 Democrats raised the notion that the President’s tweet was another sign of witness intimidation — an offense that could wind up included in potential articles of impeachment against the President.

“It may get to that,” House Majority Whip James Clyburn, a South Carolina Democrat, said when asked whether witness intimidation should be part of articles of impeachment.

Rep. Eric Swalwell, a California Democrat on the House Intelligence Committee, said witness tampering “will be considered, if there’s evidence of that,” adding that he believed there was “strong evidence” of it.

But the President’s Republican defenders brushed off his tweet, blaming his frustration with Democrats.

“Look, the President has been frustrated with this relentless attack on him by the Democrats that started even before he was President. I think the American people can relate to the frustration,” said Ohio GOP Rep. Jim Jordan. “Democrats started in July 2016 with their crazy investigation and now they move into this, so I think that’s what drives that.”

Rep. Lee Zeldin, a New York Republican who attended Friday’s hearing, said the tweet was intended “to ensure that the entire story is getting out there,” accusing Schiff of reading only part of the tweet to Yovanovitch.

One Republican on the House Intelligence Committee, however, said the President shouldn’t be attacking Yovanovitch.

“I disagree with the tweet,” said Rep. Elise Stefanik, of New York. “I think Ambassador Yovanovitch is a public servant, like many of our public servants in the foreign service.”

After the hearing wrapped, Stefanik said Democrats were trying to distract by focusing on the tweet.

“These hearings are not about tweets, they are about impeachment of the President of the United States,” she said.

Trump defended his tweet at a White House event. “You know what? I have the right to speak. I have freedom of speech just as other people do, but they’ve taken away the Republicans rights,” Trump said.

Trump’s tweet included an accusation that Yovanovitch was to blame for problems in Somalia, which was her first foreign assignment, as well as claiming his “absolute right” to appoint ambassadors.

“Everywhere Marie Yovanovitch went turned bad. She started off in Somalia, how did that go? Then fast forward to Ukraine, where the new Ukrainian President spoke unfavorably about her in my second phone call with him. It is a US President’s absolute right to appoint ambassadors,” Trump tweeted. “They call it ‘serving at the pleasure of the President.’ ”

Asked at the hearing to respond to the tweet, Yovanovitch said, “I mean, I don’t think I have such powers, not in Mogadishu, Somalia, and not in other places.”

Democrats say Yovanovitch’s ouster, which Trump directed following a smear campaign from Giuliani and his associates, set the stage for the push for Ukraine to investigate Trump’s political rivals.

“The question before us is not whether Donald Trump could recall an American ambassador with a stellar reputation for fighting corruption in Ukraine, but why would he want to?” Schiff said in his opening statement.

“The powers of the presidency are immense, but they are not absolute and cannot be used for a corrupt purpose,” added Schiff. “The American people expect their President to use the authority they grant him in the service of the nation, not to destroy others to advance his personal or political interests.”

Yovanovitch said Giuliani’s accusations against her that led to her dismissal were false, including the notion that she had a “do not prosecute” list and that she had bad-mouthed the President to embassy officials. The effort, Yovanovitch said, showed that “foreign and corrupt interests apparently hijacked our Ukraine policy.”

“I do not understand Mr. Giuliani’s motives for attacking me, nor can I offer an opinion on whether he believed the allegations he spread about me,” Yovanovitch said. “Clearly, no one at the State Department did. What I can say is that Mr. Giuliani should have known those claims were suspect, coming as they reportedly did from individuals with questionable motives and with reason to believe that their political and financial ambitions would be stymied by our anti-corruption policy in Ukraine.”

Yovanovitch said later, “If our chief representative is kneecapped, it limits our effectiveness to safeguard the vital national security interests of the United States.”

Lawmakers in both parties praised Yovanovitch’s lengthy career of service, with several Republicans striking a notably different tone than the President toward the former ambassador to Ukraine.

Yovanovitch told lawmakers it had been a “very painful period” as a result of the attacks from the President and his associates. “While I obviously don’t dispute that the President has the right to withdraw an ambassador at any time for any reason, but what I do wonder is why it was necessary to smear my reputation falsely,” she said in response to one GOP lawmaker.

Rep. Terri Sewell, an Alabama Democrat, asked how her ordeal had affected her family.

“I really don’t want to get into that,” Yovanovitch responded. “Thank you for asking.”

Republicans argued that Trump was well within his rights to recall Yovanovitch from her post, saying the President has the power to appoint and remove ambassadors as he wishes. They pursued a line of questioning to establish that Yovanovitch had no direct knowledge of the central issues at stake in the impeachment inquiry, which occurred after she had been removed as ambassador.

“As you sit here before us, very simply and directly, do you have any information regarding the President of the United States accepting any bribes?” asked Rep. Chris Stewart, a Utah Republican.

Several Republicans questioned why Yovanovitch was testifying at all.

“This seems more appropriate for the subcommittee on human resources at the Foreign Affairs Committee,” said California Rep. Devin Nunes, the top Republican on the House Intelligence Committee. “If there’s issues with employment, disagreements with the administration — it would seem like this would be a more appropriate setting instead of an impeachment hearing where the ambassador is not a material fact witness to anything — any of the accusations that are being hurled at the President for this impeachment inquiry.”

Republicans also continued to paint the impeachment process as unfair to them and the President. When the Republicans began their 45-minute round, Nunes tried to yield time to Stefanik. The move was clearly against the rules that Democrats had passed in their impeachment resolution — the 45-minute block is designed only for the chairman and ranking member or their staff counsels — but it had the effect of Schiff being forced to block Stefanik, the sole Republican woman on the panel, from speaking.

Republican lawmakers also tried to enter into the congressional record numerous news articles where Schiff had said House impeachment investigators would have the anonymous whistleblower testify, in a theme that Republicans have continued to harp on as Schiff has insisted that the whistleblower’s anonymity be protected during the proceedings.

Following the hearing, Holmes arrived on Capitol Hill for closed-door testimony. Holmes’ opening statement, which was obtained by CNN, confirmed Taylor’s public testimony on Wednesday that Holmes overheard a July 26 phone call in which Trump asked Sondland about the status of the investigation Trump had urged Zelensky to pursue.

“Sondland told Trump that Zelensky ‘loves your ass,’ ” Holmes said, according to a copy of his opening statement. “I then heard President Trump ask, ‘So, he’s gonna do the investigation?’ Ambassador Sondland replied that ‘he’s gonna do it,’ adding that President Zelensky will do ‘anything you ask him to.'”

Holmes’ testimony gives Democrats new evidence that connects Trump more directly to the push for Ukraine to open investigations that would benefit him politically.

Just before the Yovanovitch hearing was about to gavel in Friday morning, the White House released the rough transcript of Trump’s first call with Zelensky. The call, which occurred just after Zelensky’s victory in April, was largely congratulatory, and Trump does not discuss any investigations or efforts to fight corruption with Zelensky. Trump also said he’d like to invite Zelensky to the White House.

Nunes, who charged that the Democrats’ impeachment inquiry was a “farce,” read the rough transcript at the end of his opening statement.

This story has updated with additional developments Friday.