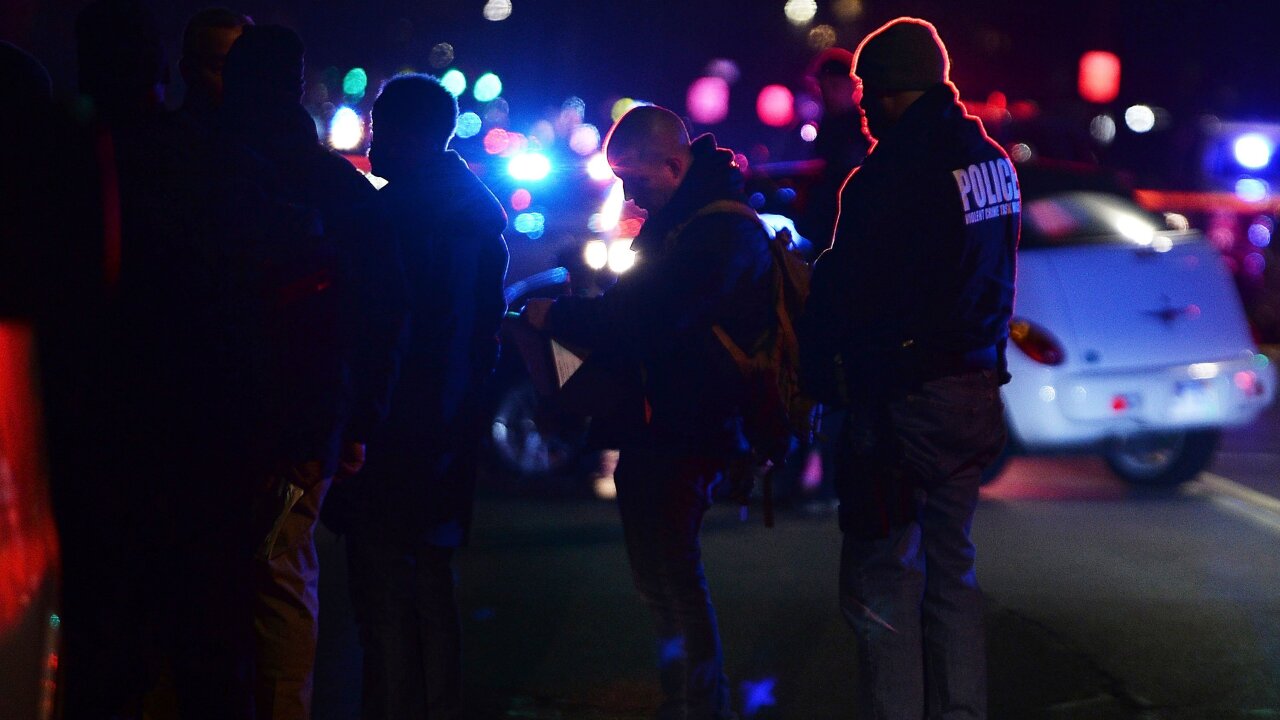 Detroit Police officers gather where one officer was shot dead and another was wounded while responding to a home invasion on Detroit’s west side late Wednesday.

A veteran Detroit police officer was killed and another was wounded in a shootout with a man accused of invading a home on the city’s west side, police said.

The 28-year-old suspect, who investigators believe entered the house on Wednesday evening while looking for his girlfriend, fired a high-powered rifle at officers after they’d arrived to look for him, police Chief James Craig said.

Detroit Police officers gather where one officer was shot dead and another was wounded while responding to a home invasion on Detroit’s west side late Wednesday.

Officers returned fire, injuring the suspect, who fled but was arrested a short distance from the home, Craig said.

Rasheen McClain, a 16-year veteran of the department, died after being shot in the neck, authorities said. McClain’s partner that night, Phillippe Batoum-Bisse, who’d been with the department 2 1/2 years, was shot in a leg and was in serious condition, Craig said.

“He really is a hero,” Craig said of the slain officer. “He fought a good fight.”

Craig did not release the name of the suspect.

Police had been called to the house around 7:20 p.m. on a report that a man with a gun had invaded the home, Craig said.

The home’s occupants “began running out, frantic” to meet arriving officers, according to the chief. They told officers the suspect was in the home armed with a long rifle. Craig said officers learned that the man was suspected of shooting at the home two weeks ago in a dispute with a girlfriend after her relative wouldn’t let him inside.

McClain, who arrived with Batoum-Bisse, radioed for help. McClain “made a conscious decision that it was time to go in and deal with a very dangerous situation,” Craig said.

Using keys from the occupants, four officers entered the front door and searched the lower and upper levels with flashlights, the chief said. As the officers got halfway down the stairs, the suspect came out from left, and fired quickly twice, hitting McClain and Batoum-Bisse, the chief said.

The other two officers retreated for cover. They fired at the suspect as he left the home, hitting him in the arm, Craig said. The gunman fled a short distance from the house, where he was apprehended and taken to a hospital, Craig said.

“It was very clear that this suspect was trying to bait the officers. He had a presence of mind,” Craig said. “But also what was clear, he wanted suicide by cop.”

Craig said the suspect was paroled in March. Investigators believe he was at the home to look for his girlfriend, Craig said. “He was angry,” Craig said, adding that he didn’t know whether the girlfriend lived there. “That’s what we know right now in terms of why he was there and why he was acting in a threatening manner.”

Slain officer was ‘ a natural leader’

McClain, 46, was married for 10 years and was the father of two children, Craig said.

Mayor Mike Duggan said McClain “was an officer that everyone looked up to, was a natural leader in every situation.”

“And, in fact in this case, first one in the door, first one down the stairs to confront an armed suspect,” Duggan said. “His courage resulted in tragedy.”