PORTSMOUTH, Va. - Detectives with the Portsmouth Police Department Major Crimes Unit are continuing their investigation into the robberies of two local restaurants by who they believe is the same individual.

The first robbery occurred on Wednesday, November 13 around 9 p.m. at the America’s Best Wings located at 1507 London Boulevard. According to detectives, the suspect entered the business and produced a handgun. The suspect then ordered the employee to open the register, and the employee complied with the suspect’s demands.

Manager M.D. Alam says he was in the front of the store and ran outside to call 911 before the thief saw him, but the suspect got away through the back door of the business.

Alam says the suspect stole somewhere between $2,500 and $4,000 from the registers before leaving.

He hopes the landlord will add lights and cameras to the back the store to deter criminals next time.

The second robbery occurred on Friday, November 22 around 9:30 p.m. at the Burger King, located at 600 Airline Boulevard.

The suspect is described as a black male weighing around 160 pounds and standing between 5’8” and 5’9” tall. He was last seen wearing a black and blue jacket with a hood, dark-colored pants and had a white cloth covering the lower portion of his face.

Detectives need your help identifying the suspect involved in both these cases. If you recognize the suspect pictured in the surveillance photographs, you are urged to contact the Crime Line. 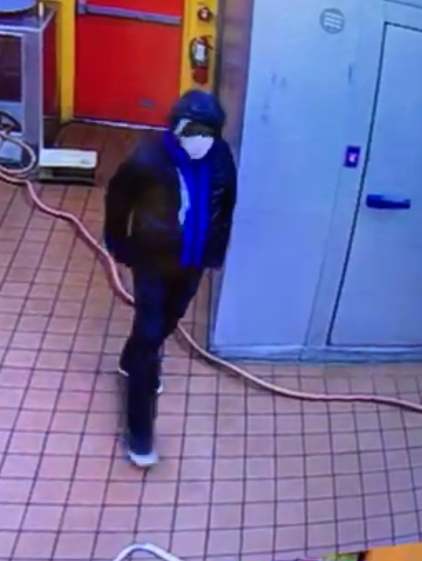