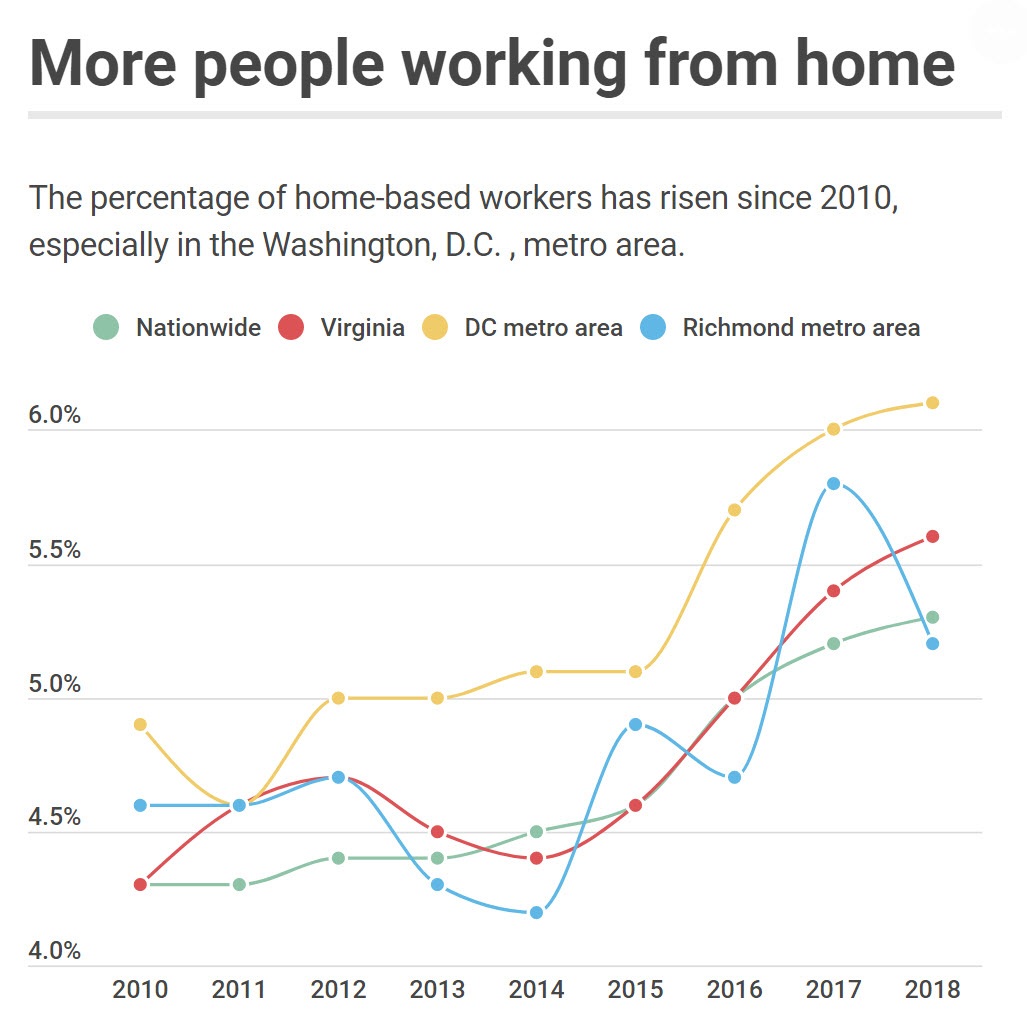 RICHMOND, Va. — More Americans are working from home, and that’s especially true in Virginia and in the Washington, D.C., metro area, according to new data from the U.S. Census Bureau.

Nationally, the proportion of workers who work from home rose from 4.3% in 2010 to 5.3% last year, the data show. Virginia is slightly above the national average, with 5.6% of the state’s workforce working from home in 2018.

The figure was 6.1% in the D.C. metro area, which includes parts of Virginia, Maryland and West Virginia. That was the highest proportion of people working from home among the five U.S. metro areas with the most workers.

In contrast, the proportion of workers who worked from home last year was 5.9% in the Los Angeles metro area, 5.8% in the Dallas-Fort Worth area, 5.4% in the Chicago area and 4.7% in the New York area.

Why are more people working from home?

“People are better able to focus and not as distracted as they are in the office,” said Brie Reynolds, career development manager and coach at FlexJobs, a website that focuses on finding telecommuting jobs for workers in cities and remote areas.

Reynolds believes telecommuting will continue to grow. She said more people are turning to her company’s website to find work and more employers are offering remote work each year.

“I think more people’s jobs can just be done that way,” Reynolds said. “More people are able to do their jobs from anywhere where they’ve got a computer and an internet connection and maybe a phone.”

FlexJobs helps connect workers with a range of employment, including freelance opportunities and part-time jobs. The most popular categories this year for remote jobs are computer and information technology, medical and health, and sales, Reynolds said.

She said even doctors can now work from home, interacting with patients and insurance companies by phone and computer.

Education and training is another field on the rise, according to Reynolds. “There’s a lot more virtual education out there, online courses, and universities that are creating totally virtual or remote degree programs,” Reynolds said.

According to Derrick Neufeld, associate professor of information systems and entrepreneurship at the Ivey Business School at the University of Western Ontario in Canada, employers can save money in real estate and rental expenses by having people work remotely or work from home.

“That can be a very significant factor. If they can start shutting down office space, it can save a lot of costs,” Neufeld said.

Neufeld said working from home can be a desirable alternative work arrangement, allowing workers to live farther from the city.

But there are downsides to working from home.

Neufeld said his recent studies have found that people who don’t meet face to face have a problem assessing the trustworthiness of their coworkers.

“It’s like a switch that doesn’t get turned on,” Neufeld said. “We can’t simply replace face-to-face communication with, let’s say, a video cast.”