House Democrats plan to move forward with at least two articles of impeachment against President Donald Trump on Tuesday, one on abuse of power and the other obstruction of Congress, according to multiple sources familiar with the matter.

A third article on obstruction of justice is still being debated, and the sources cautioned Monday night that plans were still being finalized.

Leaving a meeting in House Speaker Nancy Pelosi’s office Monday evening, House Foreign Affairs Chairman Eliot Engel of New York told reporters there would be an announcement Tuesday morning to lay out articles of impeachment, but wouldn’t get into details about their contents.

“This is not a happy day,” Engel said, “but I think we are doing what we have to do.”

The announcement Tuesday will come one day after Nadler accused Trump of putting “himself before country” at a chaotic hearing kicking off a two-week sprint for Democrats likely to end in the third impeachment of a president in US history.

The hearing was a chance for Democrats to state their case against the President a final time before moving forward with articles of impeachment. Democrats charge that Trump abused his office by pressuring Ukraine to investigate his political rival while withholding $400 million in US security aide and a one-on-one White House meeting. And they say he obstructed Congress by refusing to provide documents to the committee and instructing officials not to testify in the impeachment inquiry.

What’s still up for debate are the obstruction of justice allegations detailed in the Mueller report, which Democrats said Monday pointed to a larger pattern of Trump’s misconduct.

The hearing for Democratic and Republican staff attorneys to present cases for and against Trump’s impeachment saw the bitter partisan divide over the impeachment proceedings spilled into the open, with Republican lawmakers vocally protesting Nadler’s handling of the hearing and committee staffers even clashing during questioning.

“He’s badgering the witness,” said GOP Rep. Jim Sensenbrenner of Wisconsin, trying to raise an objection to Berke’s questioning. When Nadler ruled he wasn’t raising a valid objection, Sensenbrenner said: “The chairman is not in order.”

The exchange was one of the many Republican objections that occurred Monday during a lengthy hearing where even the decision to recess prompted multiple party-line roll-call votes. As questioning of the staff attorneys began — which created an odd dynamic where one committee staffer was grilling another — the GOP protests intensified along with the volume of Nadler’s gavel banging down to stop the interruptions.

“Bang it harder — still doesn’t make it right,” said Rep. Doug Collins of Georgia, the top Republican on the House Judiciary Committee, in a shot at Nadler.

Democrats used Monday’s hearing opportunity to weave the hours of witness testimony to illustrate their narrative that the President abused his office.

“If he puts himself before the country in a manner that threatens our democracy, then our oath — our promise to the American people — requires us to come to the defense of the nation,” said Nadler, a Democrat.

Nadler declined to discuss the articles on Monday evening leaving the Judiciary Committee’s offices, but he said Republicans only tried to attack the process, not the facts against the President.

“The Republicans hardly attempted to defend the President’s conduct,” Nadler said. “All they talked about from their point of view was the improper process, about (former Vice President Joe) Biden and Burisma and Ukraine. But nothing about defending the President’s conduct, and that’s probably because the evidence is overwhelming and the conduct indefensible.”

Republicans also pointed to witness testimony to argue that Democrats didn’t have a case, charging they rushing to impeach Trump in order to beat him in the 2020 election.

“This may though become known as the focus-group impeachment,” Collins said. “Because we don’t have a crime, we don’t have anything we can actually pin and nobody understands really what the majority is trying to do except interfere and basically make sure they believe the President can’t win next year if he’s impeached.”

The objections to the hearing began as soon as Nadler started his opening statement, as a protester in the audience shouted down the Judiciary Committee chairman before being removed by US Capitol Police. Republicans on the committee then took up their own objections, demanding a hearing for the witnesses they want to hear from and accusing Nadler of “a steamroll” when he ignored their protests.

Republicans knocked House Intelligence Chairman Adam Schiff, a California Democrat who led the Intel panel’s impeachment inquiry, for not testifying before the Judiciary panel, with staff counsel Daniel Goldman appearing instead to discuss the committee’s report.

“We want Schiff in that chair, not you,” shouted Rep. Matt Gaetz, a Florida Republican.

Collins went after Goldman during his questioning over the committee’s subpoenas that revealed phone calls of Rep. Devin Nunes, the top Republican on the Intelligence Committee, and journalist John Solomon, whose opinion columns in The Hill attacked former US Ambassador Marie Yovanovitch. Goldman said that the committee didn’t subpoena either Nunes or Solomon, but that didn’t slow the Republican lawmakers’ criticisms.

“Somebody along the way just didn’t all of a sudden have an epiphany … that these numbers might match,” Collins said. “Who ordered it, was it you, or was it Chairman Schiff, and then why was it decided, except for nothing but smear purposes, to be included in the Schiff report?”

Monday’s hearing is likely to be just the opening act of a week’s worth of major Judiciary Committee activity on impeachment, as Democrats are expected to bring forward articles of impeachment that will be debated and voted on in the committee later this week.

Nadler declined to say what the committee’s next steps would be, saying he was “not prepared to say anything further about the schedule of the committee beyond today’s hearing.” But he concluded the hearing by declaring that Trump’s conduct was “clearly impeachable.”

“This committee will proceed accordingly,” he said. 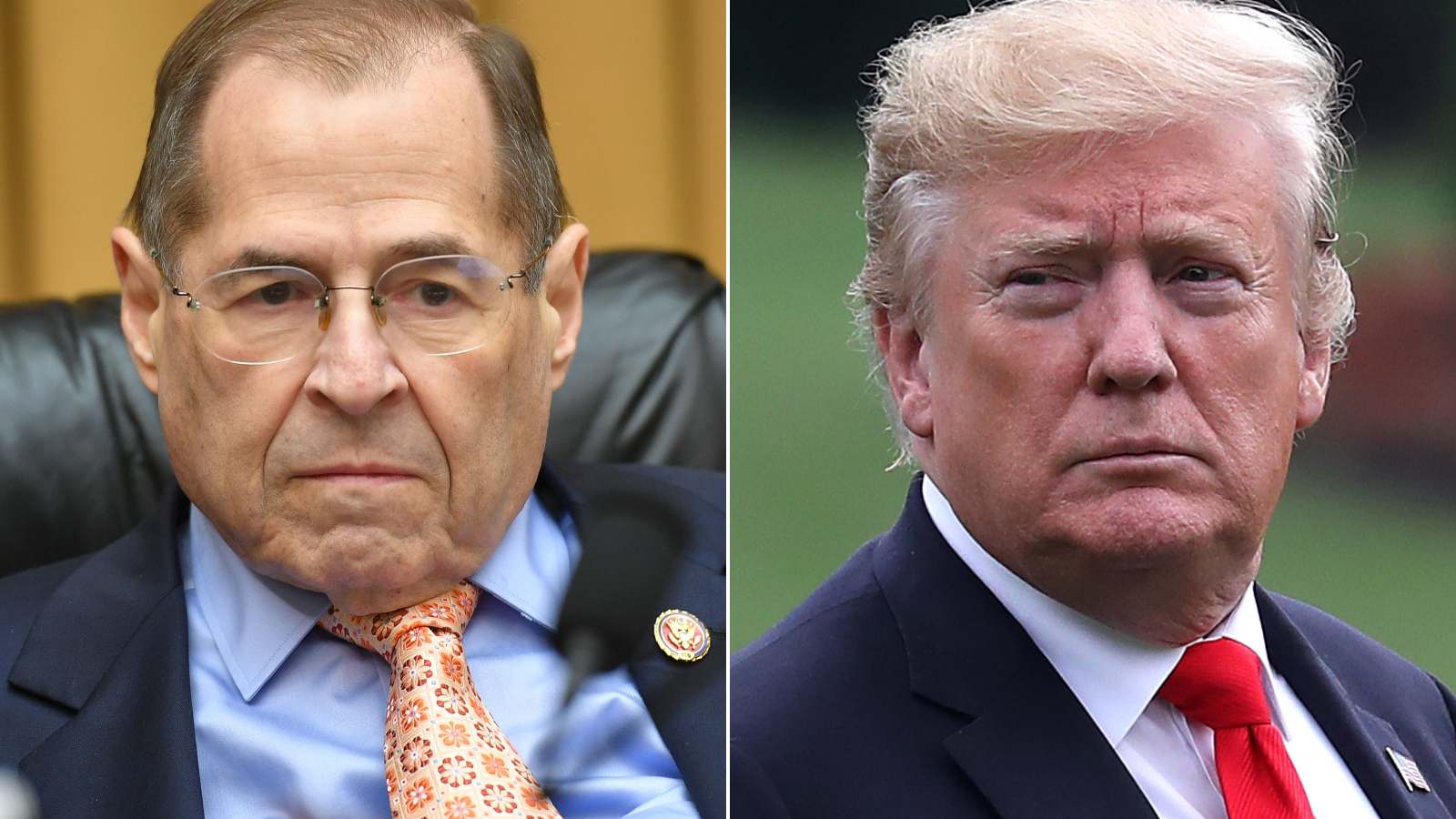 Staff present case for and against Trump

The diametrically opposing views between Democrats and Republicans on impeachment — where they have failed to agree on basic facts and what they mean — underscores the intense partisan fight that’s continued to escalate as an impeachment vote has drawn closer.

Both sides found plenty of testimony to back up their case throughout the dozens of hours of witness testimony that occurred in the House Intelligence Committee.

Presenting the Democrats’ case before he asked questions, Berke described a pattern of Trump’s behavior dating back to his call for Russia to find Democratic nominee Hillary Clinton’s emails during the 2016 election.

“Given what happened with the Department of Justice investigation, given what’s happening here, if in fact President Trump can get away with what he did again, our imagination is the only limit to what President Trump may do next or what a future president may do next to try to abuse his or her power to serve his own personal interest over the nation’s interest,” Berke said.

Goldman walked through the committee’s investigation during his presentation, pointing to testimony Democrats say shows that Trump directed the effort for Ukraine to investigate his political rival while withholding US security aid and a White House meeting. Goldman said that senior officials were all “in the loop” about the effort, as US Ambassador Gordon Sondland testified, and he argued Trump’s “determination to solicit of foreign interference in our election continues today.”

“It did not end with Russia’s support for Trump in 2016, which President Trump invited by asking for his opponent to be hacked by Russia,” he said. “And it did not end when his Ukrainian scheme was exposed in September of this year.”

Castor laid out his own pattern — one that he says shows the Democrats were working to impeach the President since the day he took office. Castor pointed out all of the Democratic investigations into the President across the House committees, from the testimony of Michael Cohen to the lawsuit to obtain the President’s tax returns, to argue the impeachment inquiry has been long in the making.

“The record in the Democrats’ impeachment inquiry does not show that President Trump abused the power of his office or obstructed Congress,” Castor said. “To impeach a president who 63 million people voted for over eight lines in a call transcript is baloney.”

Castor argued that Democrats provided “no direct evidence that President Trump withheld a meeting or security assistance in order to pressure President Zelensky to investigate former VP (Joe) Biden,” pointing to testimony from special envoy Kurt Volker to argue witnesses did not testify to a quid pro quo.

“Witnesses who testified in the inquiry have denied having awareness of criminal activity or even an impeachable offense,” he said. “On the key question of the president’s state of mind, there is no clear evidence that President Trump acted with malicious intent.”

Debating what to do about Mueller

While House Speaker Nancy Pelosi and senior Democrats have made clear they are proceeding with impeachment, House Democrats are still debating whether the articles should narrowly focus on Ukraine or to expand the scope of the articles to include the allegations detailed by Mueller.

While Judiciary Committee Democrats say Trump’s conduct documented by Mueller should not be excused, Schiff on Sunday seemed to indicate he did not support including the Mueller allegations in the impeachment articles.

“There is overwhelming evidence the President sought to coerce Ukraine into interfering in our election, essentially sought to cheat in our next election by getting a foreign government to weigh in,” Schiff added. “That is a very serious business and it imperils our national security, it’s a gross abuse of his office and the President also deeply sought to obstruct the investigation into that wrongdoing, and I think that is the gravamen of this offense here.”

The White House on Friday said it would not participate in the Judiciary Committee proceedings, telling the committee in a letter the impeachment inquiry was “completely baseless” and a “reckless abuse of power.”

Rep. Pramila Jayapal, a Washington Democrat on the Judiciary Committee, told reporters Sunday that the committee was prepared to hold another hearing this week if the White House planned to present its own case, but because Trump isn’t participating the committee does not expect another hearing.

“We need to listen, we need to go through the hearing (Monday) and see what is said there,” Jayapal said. “We do want to listen to the minority case, the minority’s counsel, we want to make sure we have all that information in front of us, and then once that’s done, we’ll have a good sense of what’s next.”

This story has been updated with additional developments Monday.