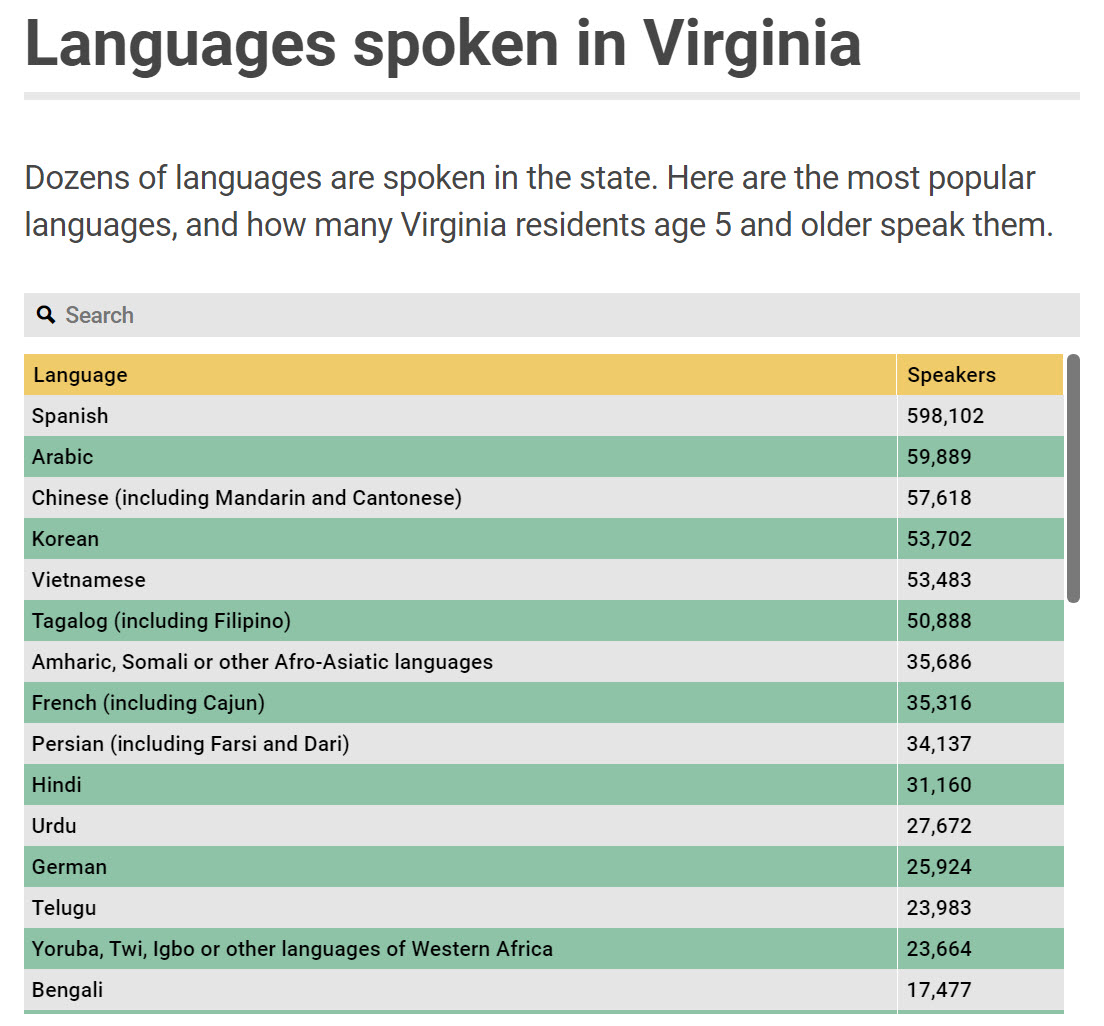 The couple is living in Richmond with their three children: a 9-year-old son, Muath, and daughters Ilan, 11, and Afnan, 4.

Though the family is thousands of miles from home, the Alahmaris want their children to stay connected to Saudi culture and especially the national language. So the parents speak Arabic to the children at home, and the youngsters take Arabic lessons at the Islamic Center of Richmond.

“Teaching my kids to speak in my maiden language is a very important thing to do. It is important to me as a mother and very important to the community as a whole,” Nahlaa Alahmari said. “It allows my children to feel more connected to their state of origin.”

The Alahmari family reflects the growing diversity of languages spoken in Virginia: The proportion of residents who speak a language other than English at home has risen from 14.8% in 2010 to 16.4% last year, according to new data from the U.S. Census Bureau.

Approximately 7.5% of Virginia households speak Spanish, the data showed. Then come Arabic, Chinese, Korean and Vietnamese, each at slightly less than 1%. Dozens of other languages are spoken in the commonwealth as well — from Hindi and German to Telugu and Russian.

Arabic speakers represent one of the fastest-growing language groups in Virginia. Since 2010, the number of Arabic speakers in the commonwealth has risen 63% to almost 60,000, according to the Census Bureau’s American Community Survey.

Not surprisingly, the rise in Arabic speakers has paralleled the rise in the number of Virginians who trace their ancestry to the Arab world.

In most states, people with Arab heritage make up less than one-half of 1% of the population. The states with the highest concentrations of Arab-ancestry residents are:

Within Virginia, Fairfax County has the highest concentration of Arab-heritage residents — 2.7%.

U.S. residents with Arab ancestry come from a range of countries. Lebanese is the most common nationality, followed by Egyptians and Syrians.

Studies show that migration from the Middle East and North Africa increased after the Arab Spring, the anti-government protests and uprisings that spread across much of the Islamic world in the early 2010s. That might explain the rise in the Arab population in the U.S. this decade.

Although Arab countries have their own cultures and traditions, one commonality is language. As people from those countries have immigrated to America, they have brought the language with them and sought to pass it along to their children.

Academic research has documented the benefits and challenges when people continue speaking their mother tongue abroad and teach it to their children.

For example, a study titled “Bilingual Children’s Mother Tongue: Why is it important for education?” highlights how social, racial and cultural barriers can discourage people from learning their mother tongue and how parents can establish a strong language policy to avoid language loss.

Mohammed Albishri, a Ph.D. student at the University of Colorado at Denver, is a linguistic specialist. He said children who learn two languages end up speaking both better.

About three-fourths of the Arabic speakers in Virginia say they speak English “very well,” according to the Census Bureau’s survey.

For children of immigrants, the problem often is not learning English — it’s learning the language of their home country. Nahlaa Alahmari said it can be a challenge to get her children to study Arabic.

“Sometimes,” she said, “my kids themselves resent practicing the language as they say it is too difficult for them to comprehend — which, of course, it is reasonable as no one else around them speaks the language.”