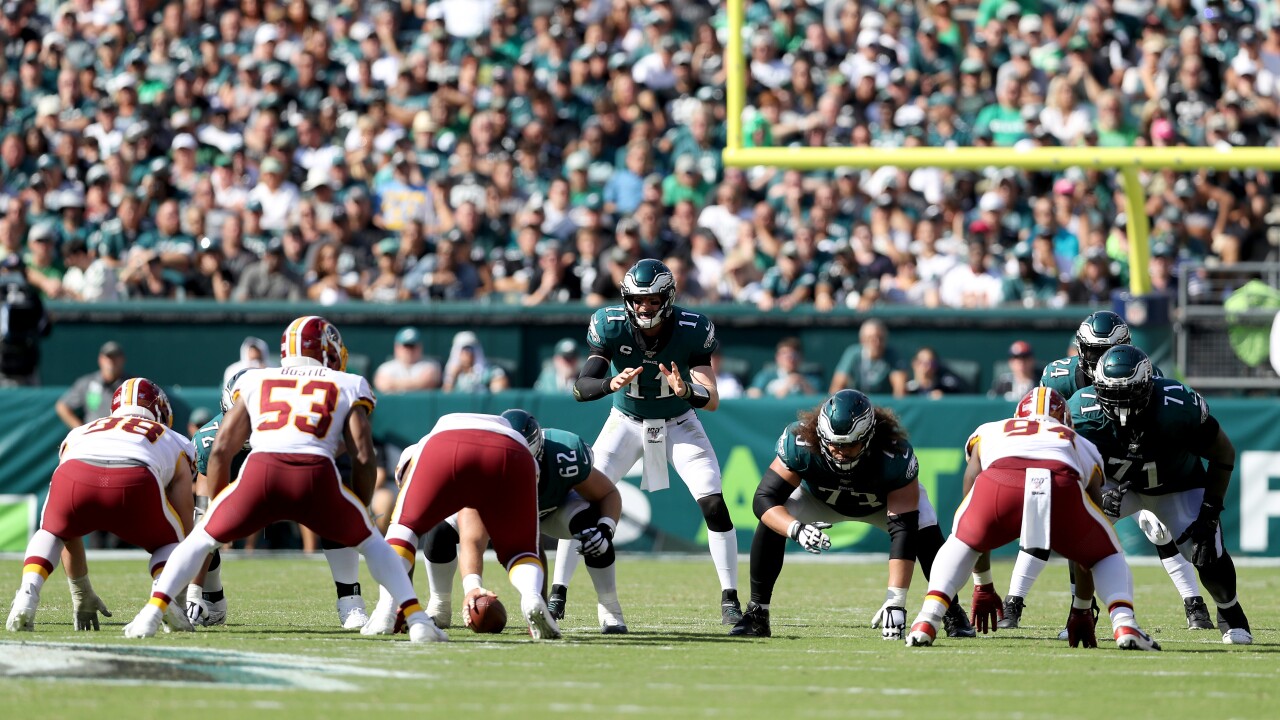 Quarterback Carson Wentz #11 of the Philadelphia Eagles waits for the snap against the Washington Redskins. (Photo by Rob Carr/Getty Images)

Quarterback Carson Wentz #11 of the Philadelphia Eagles looks to pass against the Washington Redskins. (Photo by Patrick Smith/Getty Images)

LANDOVER, Md. – Plenty has changed since the last time the Redskins faced the Eagles.

When Washington opened its 2019 season at Philadelphia, Jay Gruden was the head coach, Dwayne Haskins was the backup quarterback and future Hall of Fame running back Adrian Peterson was a healthy scratch. One thing that hasn’t changed: the Redskins are struggling.

The ‘Skins blew a 17-point first half lead en route to a 32-27 loss in their first meeting with Philadelphia this season. Since then, Washington has lost nine of its next 12 games. Since that fast start and brutal finish in week one, the Redskins have been slow out the gate in games.

“I’m tired of the slow starts, our guys are, too,” interim head coach Bill Callahan said this week. “We put a lot of thought, focus and concentration into the openers and really spent a lot of time trying to put in the right type of schemes that earn first downs and extend drives and scoring. That’s the goal on the first drive of the game, try to jump ahead, get ahead, find a way to get on the board early. We haven’t succeeded at that and that’s a challenge going into this game because this is a team that has started fast. We did a good job in the opener against them, but we didn’t finish strong, but it’ll be important here at home that we do a good job setting the tone, setting the pace, getting up to the start that we need to get into. That’s the challenge for us.”

Quarterback Carson Wentz #11 of the Philadelphia Eagles waits for the snap against the Washington Redskins. (Photo by Rob Carr/Getty Images)

Sunday, the Redskins (3-and-10) host the Eagles (6-and-7) in an NFC East battle – although only Philadelphia has playoff aspirations, as Washington was eliminated with last week’s loss at Green Bay. Washington, winless in divisional games (0-and-3), is trying to pick up its first victory of the season vs. an NFC East foe.

Kickoff is set for 1:00 p.m. at FedEx Field. News 3, Hampton Roads home of the Redskins, will have live pregame and postgame coverage – both on-air and online.