‘Giving Machines’ make helping those in need convenient during the holidays 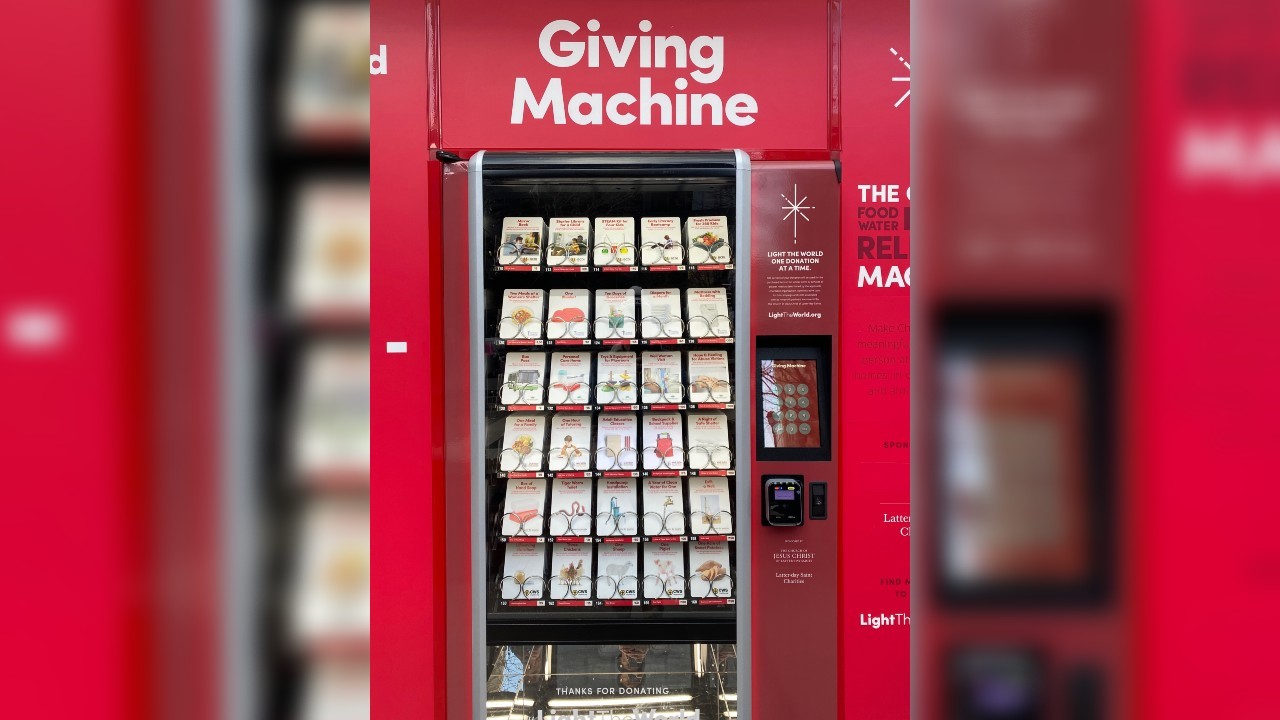 (KMGH) Instead of satisfying cravings, unique vending machines across the country are being used to do some good this holiday season.

They’re called the “Giving Machines,” and these vending machines are filled with items for people in need and make donating to charity as easy as buying a snack. All you have to do is punch in the number for the item you want to donate and swipe your card. The rest is taken care of.

Sharon Eubank, President of Latter-day Saints Charities, says the idea for the machines was born three years ago and they were first only placed in a couple locations, including Salt Lake City and New York City.

“You know instead of having a vending machine where you would go and buy something for yourself, what if you could use a machine that could actually give something to somebody else?” said Eubank.

Whether you have a few bucks to spare or are wanting to give back in a bigger way, the machines feature items of varying prices that you can choose from. Items range in price from $2 to $320 and include everything from food, clothing, medicine, hygiene supplies, sporting equipment and livestock.

All donations go to local and global charities.

“So, there are some global partners, which include UNICEF, WaterAid, Water for People and Church World Service. They have outlets all over the world,” said Eubank. “But in every location, there’s also local charities so that you can buy things that benefit people right in the community where you live.”

Eubank says almost all the charities in which the donations go to are actually outside The Church of Jesus Christ of Latter-day Saints, which created the machines as part of its #LightTheWorld campaign.

“This year we put in a few things that we donate to. But one of the great ideas about this is to say that there is so much polarization in our communities right now, what can we do that isn’t benefiting ourselves, but can build unity around the things that we all agree on?” said Eubank. “And so, we wanted to build these machines as a gift from The Church of Jesus Christ of Latter-day Saints, but to benefit, really other people, so it’s not viewed as self-serving. We want to do things that build bridges in our communities.”

The church says 100 percent of donations go directly to its partner charities for the purchased items or services of greater need based on their discretion. According to Eubank, the church asks the organizations that receive the donations to stay within what people bought or there are acceptable substitutes.

“So, you may buy a soccer ball, and maybe they don’t need soccer balls in that area, but what they really need are basketballs,” said Eubank. “So, we have an acceptable substitution list, which we let people know about, and then we give them the list of what was purchased and the total check.”

Last year, the machines raised more than $2.3 million for local and global charities, according to Eubank. This year, she says there are 10 locations and the church’s goal is to raise $5 million. As of Dec. 12, she said they had raised $2.438 million.

“But the more important statistic to me is that there’ve been 101,000 individual transactions, so it isn’t so much that people donated a lot, but they donated a blanket or something small and 101,000 people decided, yeah I’ll do a ‘Giving Machine’ and so that to me is the greater statistic,” said Eubank.

For those wanting to donate, the machines have been placed in these locations, where they’ll remain throughout the Christmas season:

For those who are considering making a donation using the machines, Eubank suggests bringing your children along for the experience.

“If you want to engage your kids and your community in some of these big issues, and help them figure out that we can actually do something, we can influence some of these big problems in the world, take a kid with you and let them learn about it,” said Eubank.

If you live in a location where there doesn’t happen to be a machine, Eubank says you can go to LightTheWorld.org. There, you can find charities at the bottom of the page and donate to them online.

This story was originally published by Kyle Hicks + KMGH in Denver, Colorado.