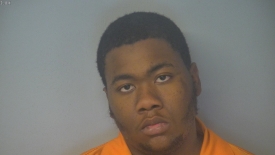 On January 22  around 4 a.m., police responded to the 100 block of Sterling Manor Dr. for a report of vehicles actively being broken into.

Officers located and arrested 18-year-old Brian Jamel Smith and 20-year-old  Corey Antonio Taylor Jr., both from Portsmouth, in connection with a series of vehicles that were broken into.

A third suspect was not located, according to police. The vehicle break-ins resulted in vehicle damage but no injuries were reported. Several stolen items were recovered including a ballistic vest carrier, firearm magazines, credit cards, and other miscellaneous items.

Also recovered, were three handguns which were stolen from another jurisdiction earlier the same evening.

Smith and Taylor were each charged with  Grand Larceny, Conspiracy to commit Grand Larceny, Destruction of Property,  Tampering with a Vehicle, Credit Card Theft, Possession of Burglarious Tools,  Possession of a Stolen Firearm , and Criminal Street Gang Participation.

If you have any information regarding this case please contact the Peninsula Crime Line or contact the Williamsburg Police Department directly at (757)-220-2331.