VIRGINIA BEACH, Va.— A Virginia Beach organization is hoping to find the anonymous donor that helped launch an art program for people of all abilities.

The Ability Center of Virginia serves adults with disabilities by providing them with various programs that allow them to make new friends and get involved in the community.

“My son does the day program during the week, and any other time on a Wednesday they would be sitting at home in their recliner watching TV,” says Art Director Tonya Doebler.

Four years ago, they were gifted more than 4,000 rubber stamps from a man’s personal collection after he died.

“It was his empire of stamps, so it was just a hobby that turned into something bigger,” says Executive Director Michelle Prendergast.

His family wanted to make sure his stamps were put to good use, but the Ability Center was never able to say thank you for the enormous donation.

Prendergast says she decided to create the non-profit's art program shortly after the donation.

It’s in its fifth year, and around 15 adults come to the center on Wednesdays from 10 a.m. – 2 p.m. and create hand-stamped greeting cards to sell.

“Giving a card that was made by somebody whose hands that have touched it and somebody with a disability - how powerful and meaningful is that?" says Prendergast.

The artists sign the back of each card they make before they are sold.

Thousands of cards have been sold at local stores in Norfolk, Chesapeake and Virginia Beach over the years. The money raised goes back into making the program free for all their artists.

Since the first donation, more people have continued to pass on their stamps and other supplies to help create the massive collection they have today.

The center is thankful for the impact of the donation, and they hope that one day they’ll be able to meet the people who made it possible.

“It’s made an impact. It’s giving them a sense of purpose a sense of belonging and teaching them new talents they didn’t know they had.”

To purchase cards or donate supplies, contact them here. 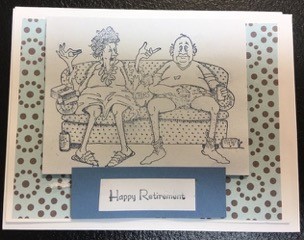