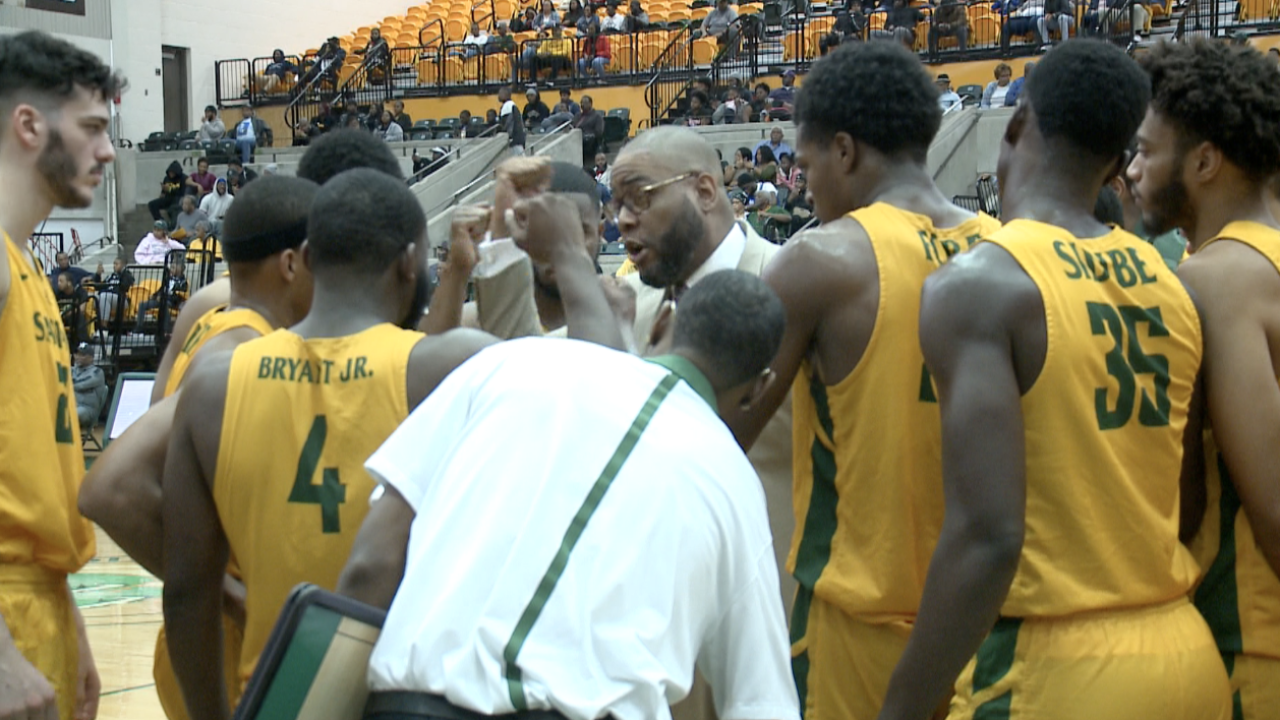 GREENSBORO, N.C. (NSUSpartans.com) – North Carolina A&T knocked Norfolk State from the ranks of the conference unbeaten, as the Aggies top the Spartan men’s basketball team 74-68 on Saturday afternoon at the Corbett Sports Center.

NSU never led in the game, and the Aggies went ahead by as much as 14. They held that 14-point advantage late in the contest before the Spartans got as close as four.

Norfolk State was unable to overcome 21 turnovers despite outscoring the Aggies by seven in the second half. The Spartans fell to 6-1 in the MEAC and 10-12 overall.

North Carolina A&T improved to 7-1 in the league as well as 11-12 overall after the battle for first.

Sophomore Joe Bryant Jr. led all scorers with 17 points on 6-of-13 shooting, 3-of-6 from deep, with six rebounds, three assists and three steals. He was one of four Spartans in double figures.

The Aggies had all five starters reach double figures, but just six players got in the scoring column. NSU’s bench outscored A&T’s by a 33-7 margin.

The Spartans trailed by 13 at the break. They made it interesting in the second half, however.

After the Aggies went ahead by 14 a few minutes in, the Spartans scored eight straight to make it a 40-34 game four and a half minutes into the second period. Senior Steven Whitley had two buckets during that time, but A&T scored the next six points to go back ahead by double digits.

It was a 48-41 ballgame after freshman Tyrese Jenkins knocked down a shot from long range at the 10:46 mark. The Aggies surged back ahead by 13 before a 10-3 run by NSU made it 60-54. Jenkins had seven points during that time as a second-half spark off the bench, and Bryant finished the run with a trey with 5:25 left in the game.

The Aggies scored eight straight after that point for another 14-point edge. Treys from Bryant and freshman Daryl Anderson, along with three free throws from senior Jermaine Bishop, helped the Spartans eventually get to within four with less than 30 seconds to go.

Jenkins added 13 points on 4-of-6 shooting, all in the second half. Whitley added 12 points on 5-of-11 shooting with six rebounds and four assists. Thanks to those free throws near the end, Bishop finished with 10 points to keep his double-digit scoring streak alive at eight games.

The Aggies had several alley-oop attempts in the early going – not all were successful, but they kept at it throughout the game – as they went ahead 16-7 at the start of the game. Junior Kashaun Hicks drained a 3-pointer and sophomore Chris Ford completed a 3-point play to answer, and Bryant rattled home a trey to help cut the deficit to six with less than 10 minutes to go in the half.

It was part of a larger 10-3 run that got NSU to within five. Whitley finished it with a pair of buckets, but the Spartans did not score after that. The Aggies tallied the last eight points of the half, covering six minutes of action, for a 37-24 edge at the break.

Both teams shot 42 percent from the field for the game, including 50 percent in the second half for the Spartans after a 33-percent first half. They also hit 8-of-22 from deep.

The Aggies outscored the Spartans 36-20 in points in the paint. Andre Jackson and Kwe Parker each made three 3-pointers and had 15 points, with Jackson grabbing nine rebounds with three steals. Of Jackson’s 15 points, 14 came in the first half.

NSU will finish out the road trip at North Carolina Central on Monday at 7 p.m.