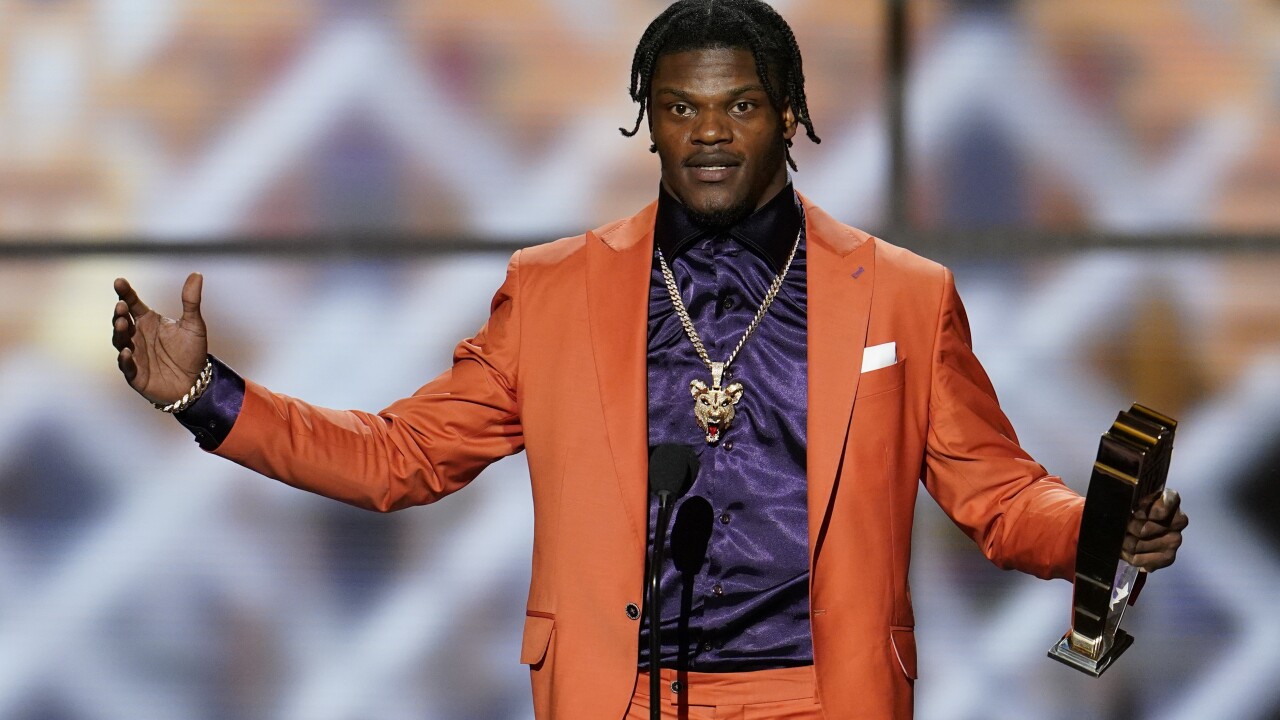 MIAMI (AP) — Lamar Jackson’s stunning season not only earned him The Associated Press NFL Most Valuable Player Award, but he won it unanimously.

That’s right: The second-year quarterback of the Baltimore Ravens joins Tom Brady as the only players to receive every vote for MVP.

Jackson drew all 50 votes from a nationwide panel of media members who regularly cover the league. Baltimore’s All-Pro set an NFL record for yards rushing by a quarterback (1,206) and led an offense that compiled more yards on the ground (3,296) than any in league history. The Ravens won their final 12 games of the regular season to finish at 14-2, the league’s best mark.

Jackson had a powerful message for kids who have been told they should change positions on the field and who face criticism and doubters.

“Make those people eat their words,” he said. “It feels good when you can make those people eat their words because they’re so negative. How are you going to wake up and be so negative about somebody who’s not negative toward you or don’t do anything wrong? Don’t worry about what they say. Do you. Stay focused because you want to be great, and you’re going to be great. Just do you.”

Brady was also an unanimous MVP in 2010. And like Brady, Jackson’s special season did not include a championship.

The best of the best. pic.twitter.com/Q3x3WGEevo

“I’m still young,” Jackson said. “I’ve still got a lot of work to do. I’m not really trying to dwell on what I just did. If I win a Super Bowl, you’ll probably see a lot more emotion.”

Thomas is only the second wide receiver to win Offensive Player of the Year. He is in good company: The other receiver to take the honor was Hall of Famer Jerry Rice in 1987 and 1993.

While Rice holds virtually all of the significant NFL receiving records, Thomas has one that made a huge difference with the voters. Thomas caught a league-record 149 passes for 1,725 yards and nine touchdowns. He also played five games without regular quarterback Drew Brees, yet made 42 catches in those outings.

“It was just consistency and following our leader, Drew Brees. He’s been a tremendous example for everyone across the league,” Thomas said. “I don’t take that for granted. I take notes on how he prepares. … Honestly, it’s hard for me to even pat myself on the back without patting the people around me on the back, because they’ve helped me tremendously.”

Gilmore is the first cornerback in a decade to win Defensive Player of the Year.

Considered one of the game’s best cover cornerbacks, the All-Pro made his eighth pro season his best with a career-high six interceptions that tied for the NFL lead. Gilmore was a key member of the league’s stingiest defense in 2019; New England allowed 225 points in winning an 11th straight AFC East title.

For leading the Ravens to the NFL’s best record, including a 12-game winning streak to end the regular season, Harbaugh joined brother Jim (2011) as Coach of the Year.

“I joke with the players all the time, you know, we’re robbing the same train,” he said. “This is a blessing. This is a privilege to be part of this whole thing. You get a chance to coach players like Mark Ingram, Lamar Jackson, Ronnie Stanley — all the guys we have, it’s just something you can’t take for granted.”

Tannehill noted that being the chosen comeback player is a mixed blessing.

“It’s an honor you never want to be up for, but it’s an honor to be recognized, and you had to overcome a lot of adversity,” he said. “To get this point, it’s special.”

Bosa, the second overall draft choice behind Murray, was such a force on the edge of the 49ers’ line that he even received votes for the All-Pro team at a very competitive position.

Bosa’s nine sacks were the fourth most for a 49ers rookie. He was third in the NFL with 68 pressures, according to SportsInfo Solutions, trailing only Cameron Jordan and Danielle Hunter, and his 16 tackles for loss tied him for fifth in the league.

Murray joined such other No. 1 overall selections as Earl Campbell and Cam Newton as offensive rookie winner. The fast, elusive and creative quarterback is the sixth man to do that double; Newton is the most recent, in 2011, one year after Sam Bradford did it. The others were running backs Campbell (1978), Billy Sims (1980) and George Rogers (1981).

“I think everybody sets out with individual goals and I knew if I played well enough — that’s not obviously the goal — but it was to do my part on the field,” Murray said.

“Lead my guys to wins and try to play as best as I can while being in the position to do so, and I had a lot of help around me.”

Results were announced at NFL Honors.