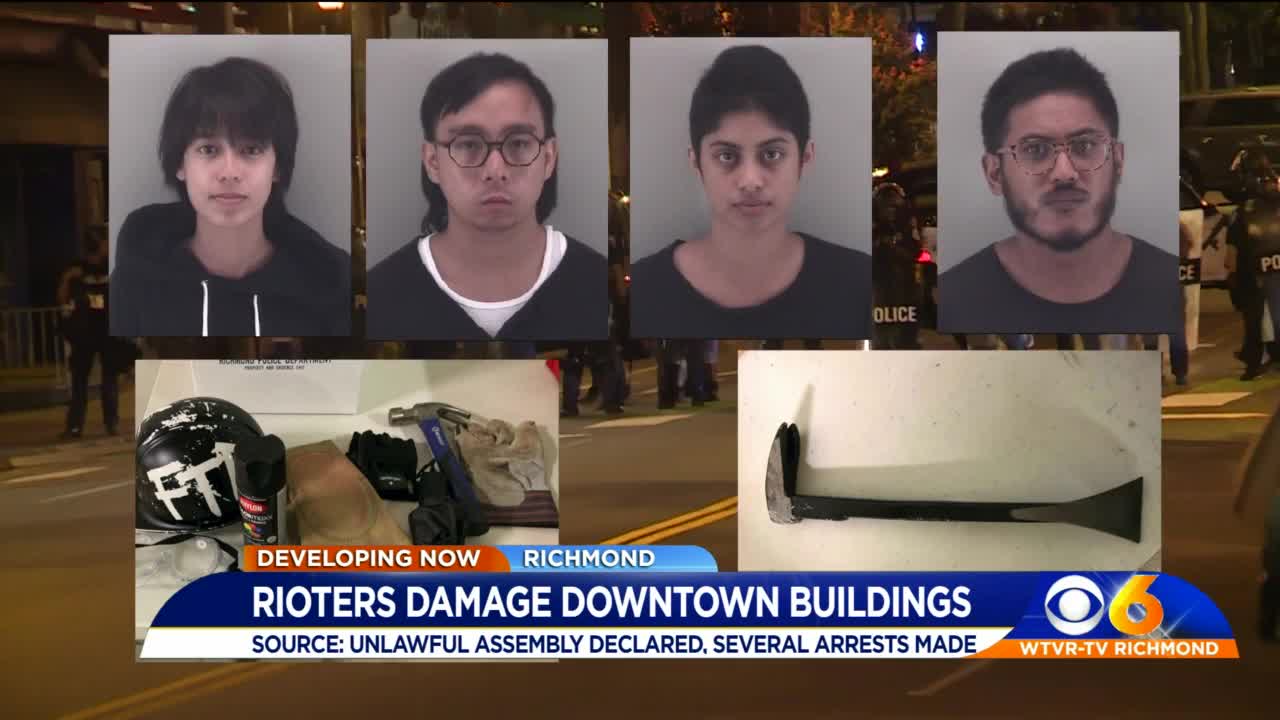 Multiple arrests were made during a riot in downtown Richmond on Tuesday night. Police declared an Unlawful Assembly around 10:30 p.m. after rioting activity by a group of 50-100 people was reported in downtown Richmond, according to Crime Insider sources.

RICHMOND, Va. -- Multiple arrests were made during a riot in downtown Richmond on Tuesday night.

Police declared an Unlawful Assembly around 10:30 p.m. after rioting activity by a group of 50-100 people was reported in downtown Richmond, according to Crime Insider sources.

A look at some of the damage we’re seeing in downtown RVA following last night’s unrest. Windows smashed out at the Suntrust, Wells Fargo, & Dominion Energy buildings — graffiti splashed on walls. John Marshall Court was also hit & is closed today due to the vandalism. @CBS6 pic.twitter.com/4UMAPzdx45

"Individuals broke windows and damaged and defaced property in several neighborhoods in the city of Richmond," a Richmond Police spokesperson wrote in a Wednesday morning email. "At approximately 11:50 p.m., officers detained several individuals. The Department consulted with the Office of the Commonwealth’s Attorney on possible charges and charged four."

Julius Dela Cruz, Lakshmi Menon, Kyra Nguyen, and Brian Quach were charged with rioting. A metal crowbar and a hammer were taken from those who were arrested, according to police.

Wednesday morning, Rasul Elder and his daughter Cambridge saw the damage to the Wells Fargo building first hand while taking a morning walk.

Elder said they live nearby, and he believes he heard some of the unrest Tuesday night.

“I came outside and security was all up in arms. We were like, ‘what’s going on?’ And we heard like loud banging,” said Elder. “This is my neighborhood, I come here, I walk with my daughter and my dog — you know, breakfast. This is where I live… We don’t need that in our neighborhoods.”

Elder added that he’s against police brutality and anything that’s holding people back, but he doesn’t agree with resorting to vandalism to get that message across.

Blocks away on 8th and Main St., Cherice Smith arrived to the Dominion Energy building for work, and saw the damage there for the first time.

“Really just realizing as soon as we pulled up. This was the first time I realized our building was vandalized — I hadn’t heard anything about it,” said Smith. “A lot of graffiti, the broken glass…”

Smith said seeing that kind of damage, made her sad.

“I think if we want change, vandalizing is not going to get us that change,” said Smith. “It takes away the whole message of black lives matter and police brutality — it takes away from all that.”

"The vandalism of our courts building and downtown businesses last night was unacceptable and misguided," Richmond Mayor Levar Stoney tweeted. "Those working peacefully for change are welcome here. Those intent on creating chaos and confrontation, who riot and commit violence against our community, will go to jail. Period."

The buildings were targeted, according to social media posts, as a protest against home evictions taking place during the pandemic.

In a flyer posted to Facebook Tuesday, people were asked to gather at the corner of Broad and Crane at 9 p.m. to stand in solidarity with Chicago and ‘every city that fights back.'

The flyer also stated, ‘The existence of police is brutality.'