Witnesses reported the fire burned buildings along the 200 block of Prince Street near Water Lane.

Witnesses reported the fire tore through buildings along the 200 block of Prince Street near Water Lane.

The Tappahannock-Essex Volunteer Fire Department (TEVFD) Fire Chief told CBS 6 the fire began in one of the Martin-Sale Furniture buildings. They were initially called for a report of smoke coming from the building around 11:30 a.m.

RELATED: Cleanup begins after Tappahannock fire: 'The town's not gone'

Officials said they found the fire on the second floor of the furniture store building, but struggled because of the amount of furniture inside.

Fire crews from multiple counties responded to the fire, including as far as Hanover County and Westmoreland County. The fire was finally under control by 2 p.m.

Traffic was shut down along Route 360 over the Downing Bridge and around downtown Tappahannock. The bridge reopened just before 6 p.m.

"Please avoid Prince Street if at all possible due to a major fire!" Tappahannock Police posted on Facebook.

The TEVFD chief said there were no deaths in the fire, but some firefighters suffered from heat exhaustion.

One couple, who lives in an apartment behind the buildings, tells CBS 6's Cameron Thompson their cat named Bubbled tragically died in the fire. They lost everything in the fire, and a family member has started a GoFundMe.

Officials said they had trained for putting out fires in this specific block of Tappahannock because of the difficulties of the furniture store, which was built in 1920. There were also propane tanks holding 500 gallons each that exploded near the buildings.

The biggest issue crews faced fighting the fire was their water supply, and they had trucks pumping water up from the Rappahannock River a few blocks away. 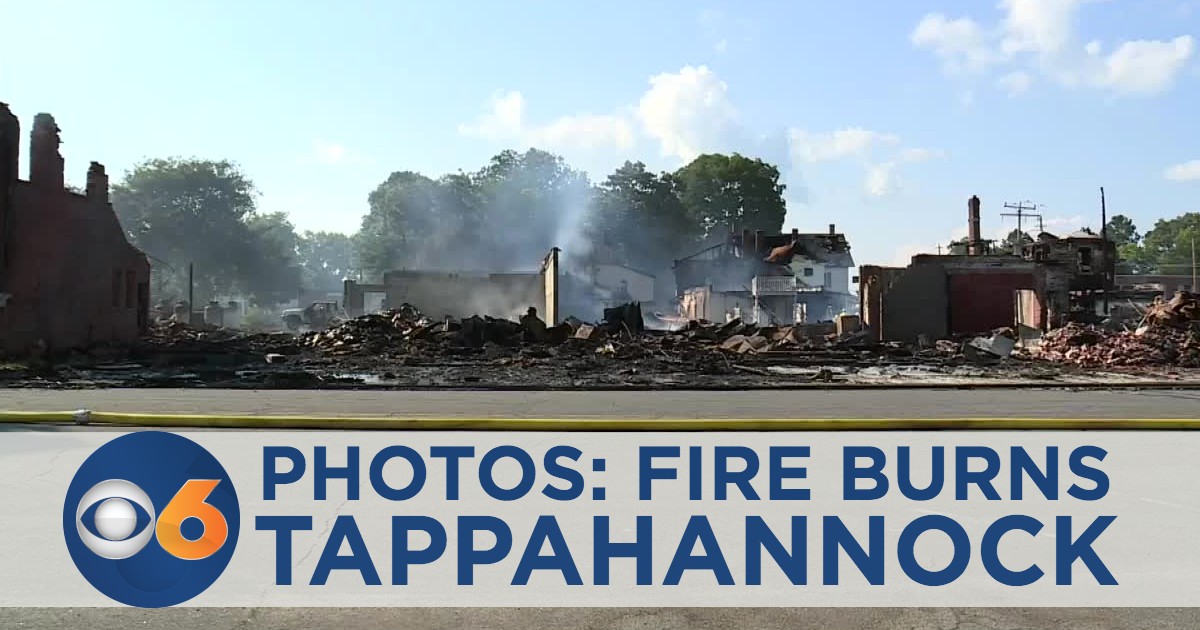 Even though the extent of the damage is still unknown, the Tappahannock Main Street Association has already launched a fund to help the businesses and residents impacted by the devastating fire.

“We ask the widespread network of people who love our river town to help lighten the load of this disaster on our community by giving any amount to help the victims,” said Tappahannock Main Street Association Director Beth Sharpe. “All proceeds will go directly to the affected employees and businesses.”

The association said other local businesses in Tappahannock are helping them to provide food and water to the first responders at the scene.

Depend on CBS 6 News and WTVR.com for in-depth coverage of this important local story. If you have more information, or photos and videos to share, email newstips@wtvr.com.