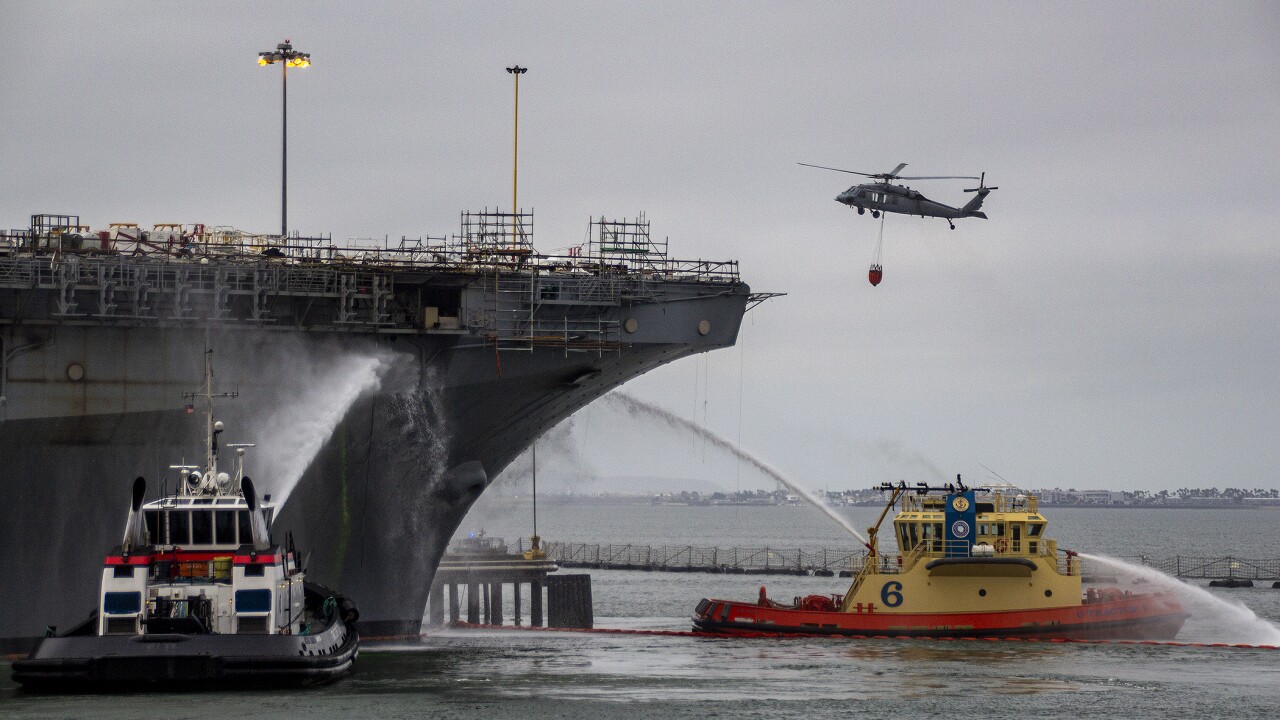 Commander, Naval Surface Force,
NAVAL BASE SAN DIEGO (July 14, 2020) An MH-60S Sea Hawk helicopter from the "Merlins" of Helicopter Sea Combat Squadron (HSC) 3 an San Diego harbor boats provide aerial firefighting support to fight the fire aboard the amphibious assault ship USS Bonhomme Richard (LHD 6). On the morning of July 12, a fire was called away aboard the ship while it was moored pier side at Naval Base San Diego. Base and shipboard firefighters responded to the fire. Bonhomme Richard is going through a maintenance availability, which began in 2018. (U.S. Navy photo by Mass Communication Specialist 1st Class Benjamin K. Kittleson/Released) 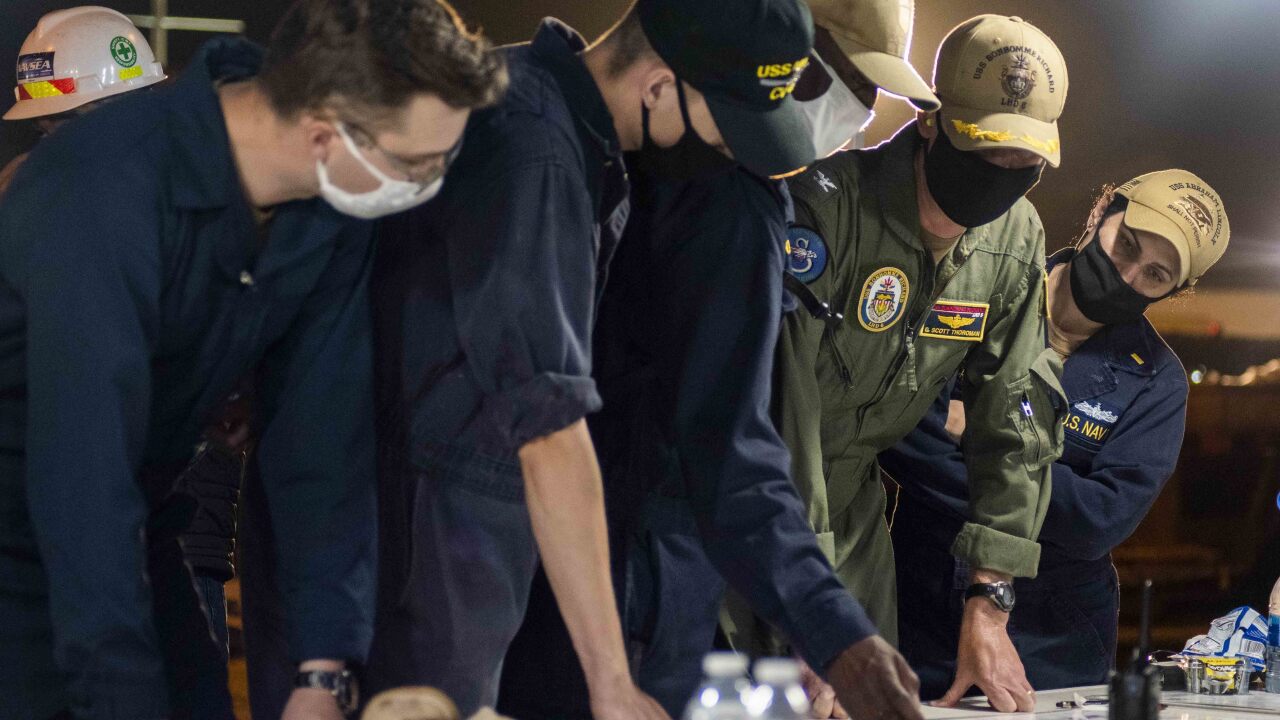 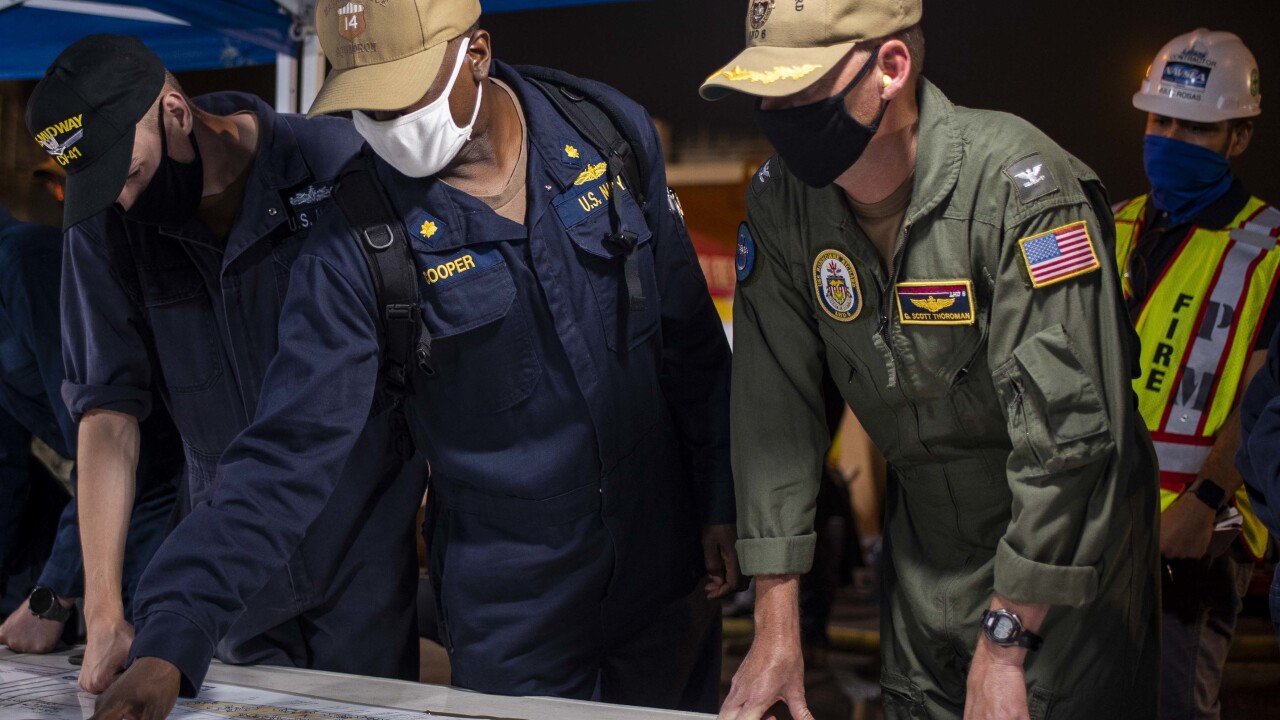 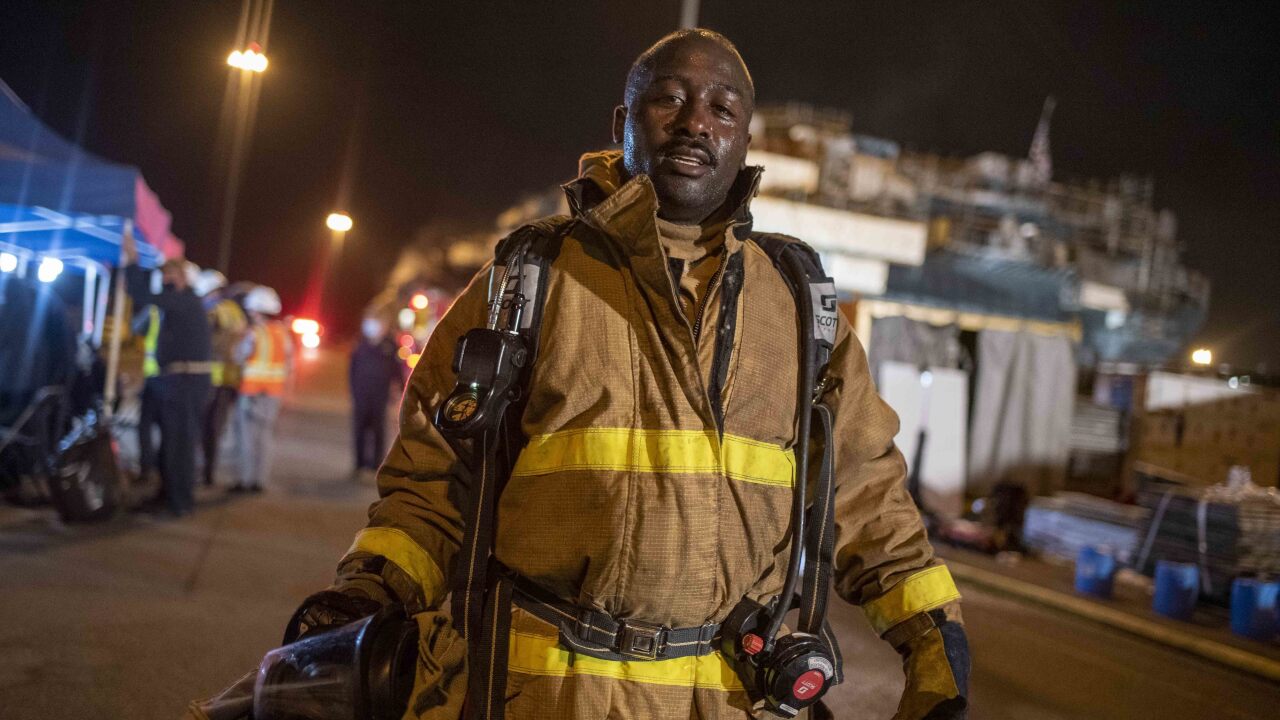 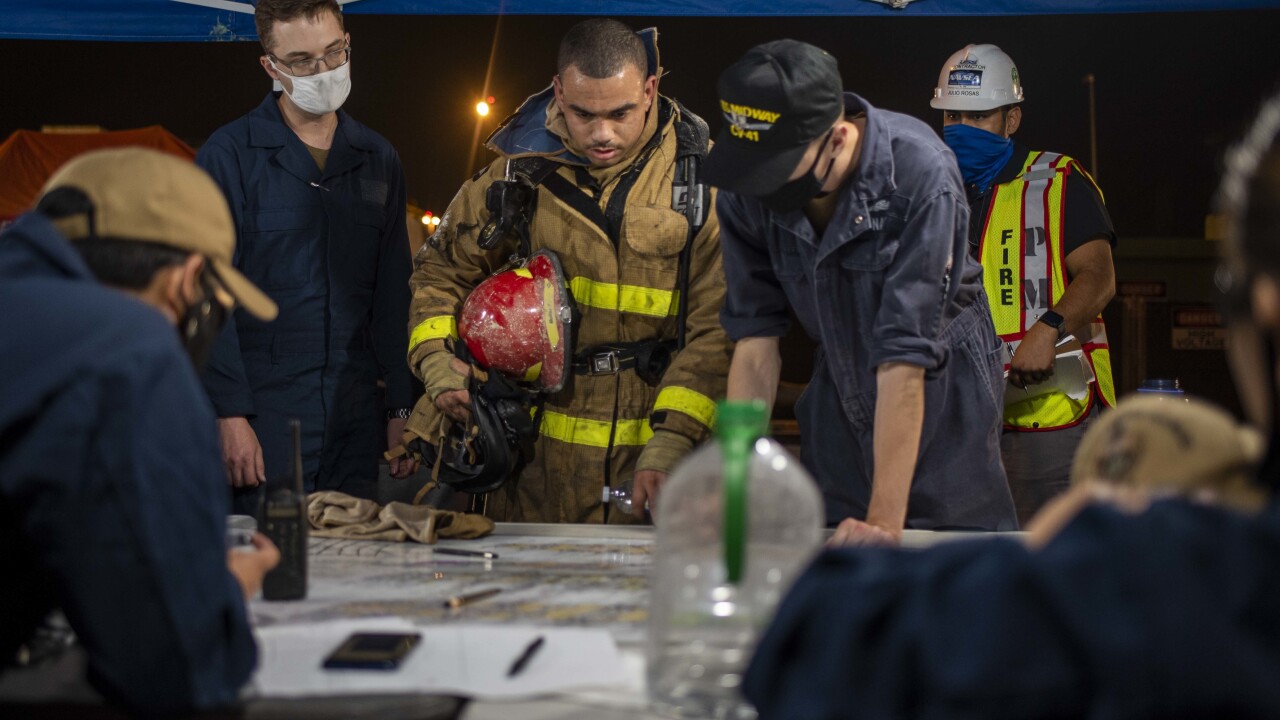 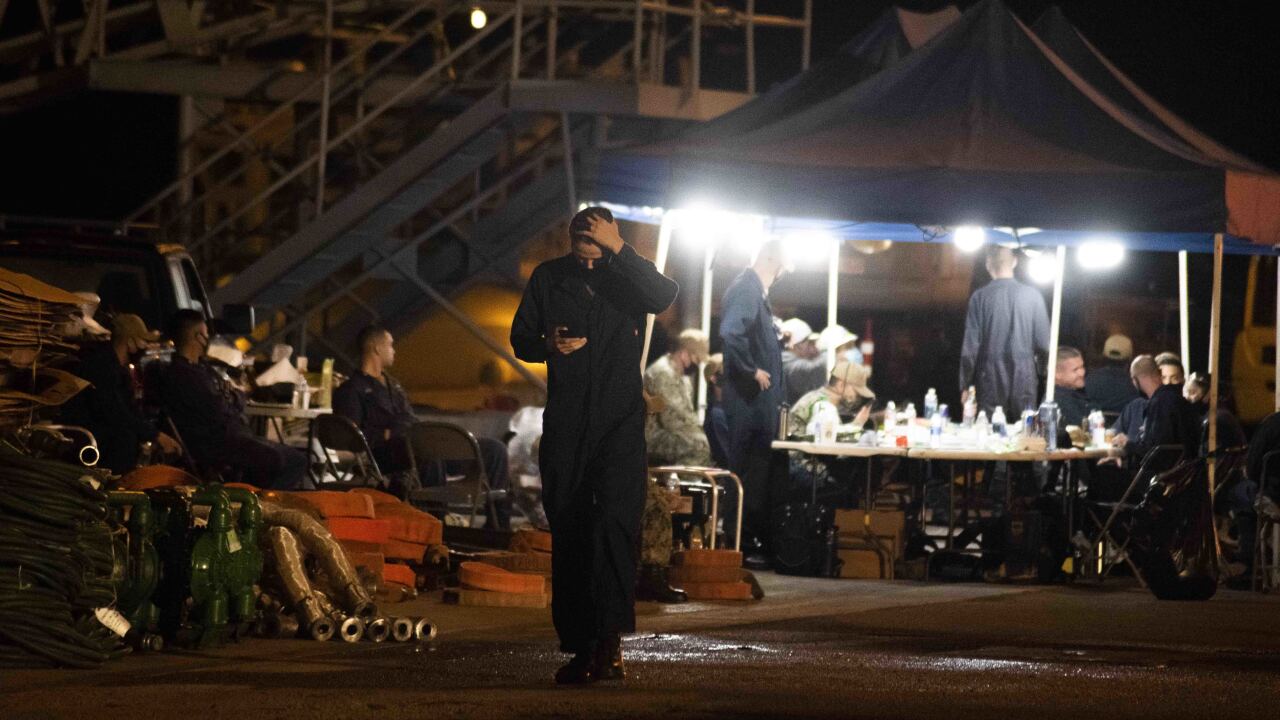 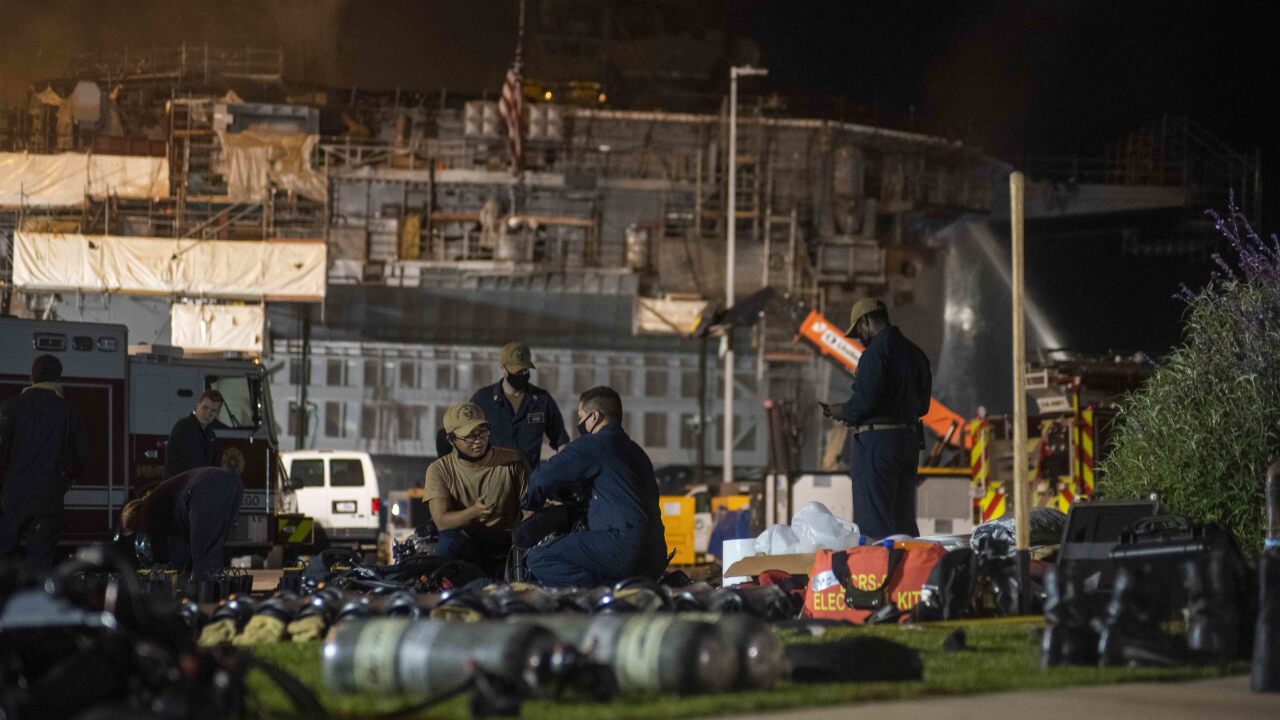 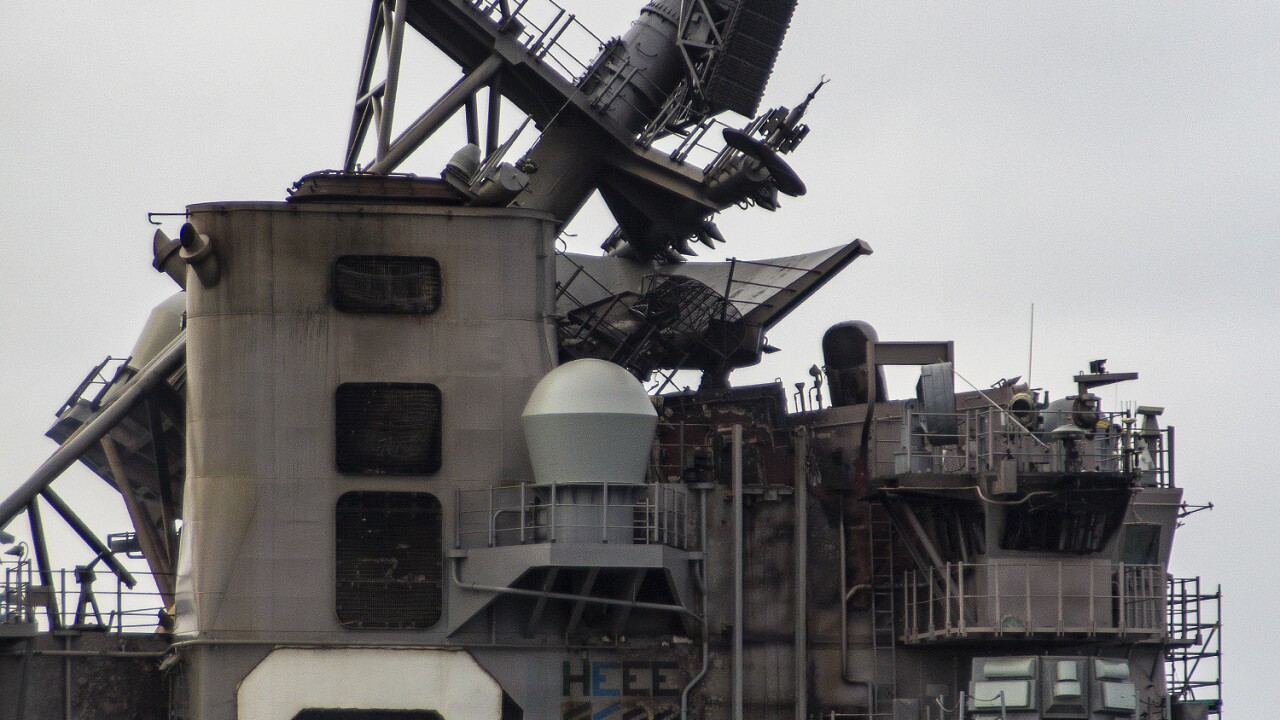 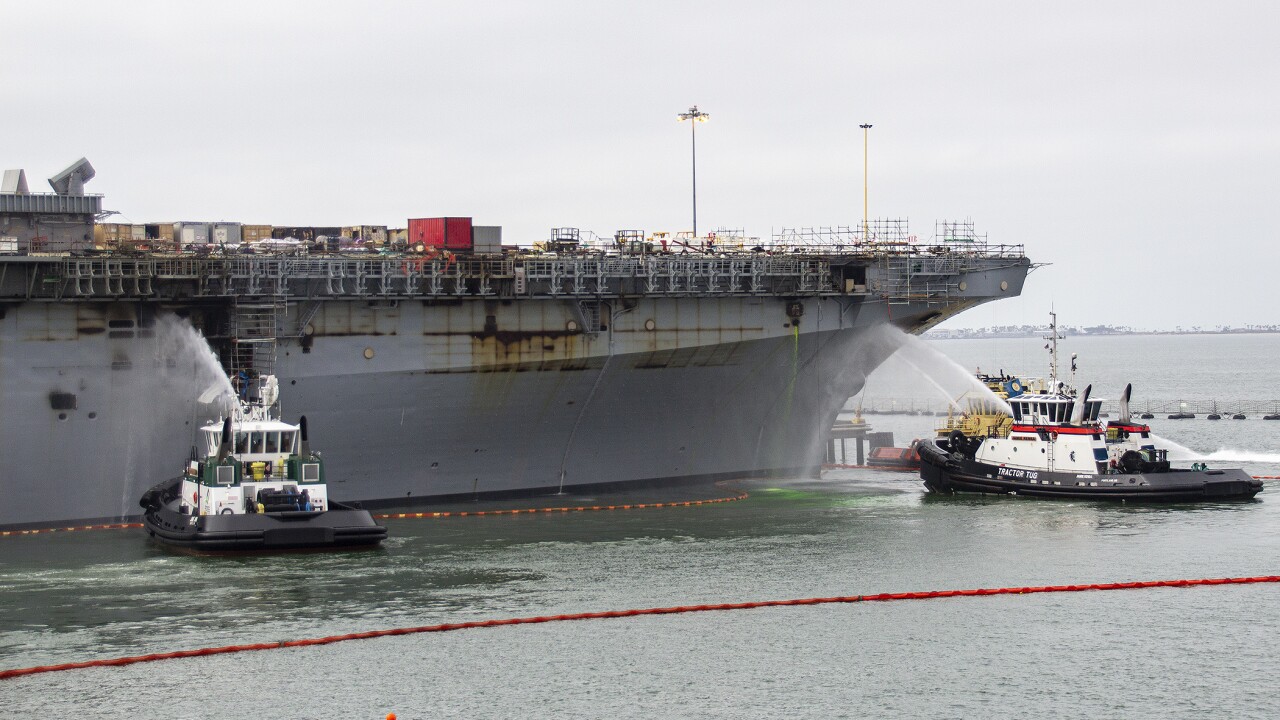 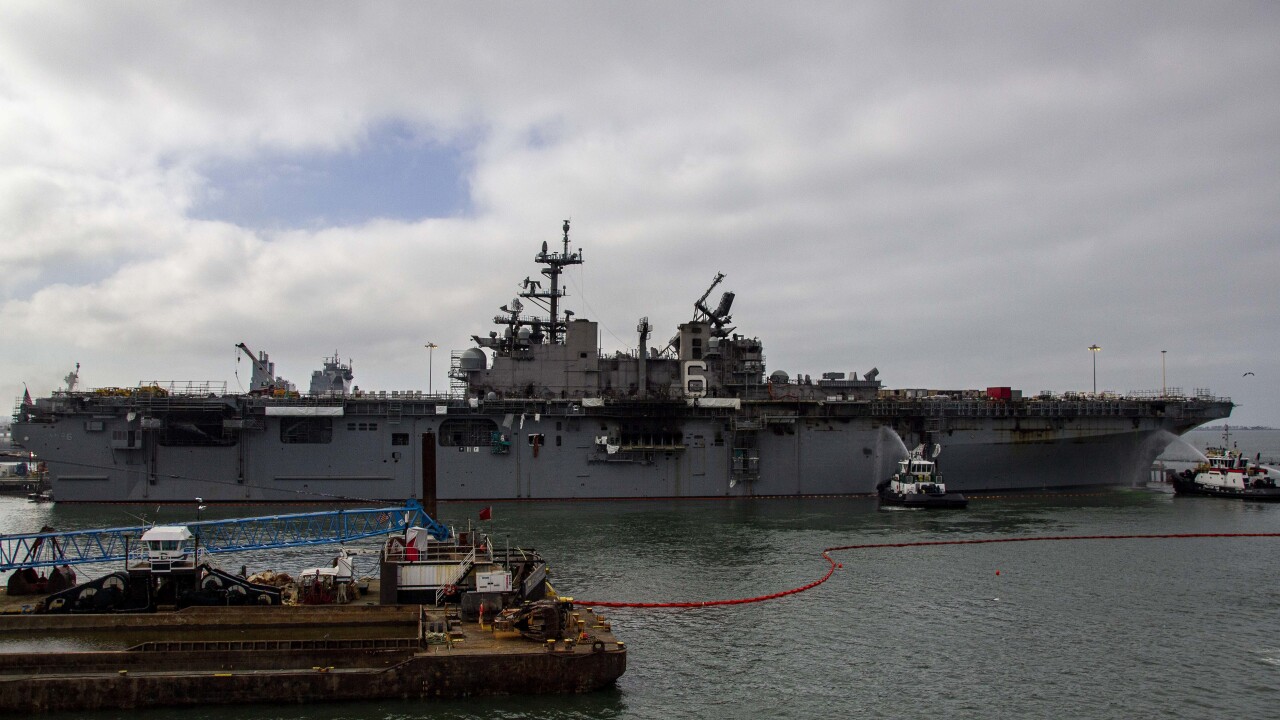 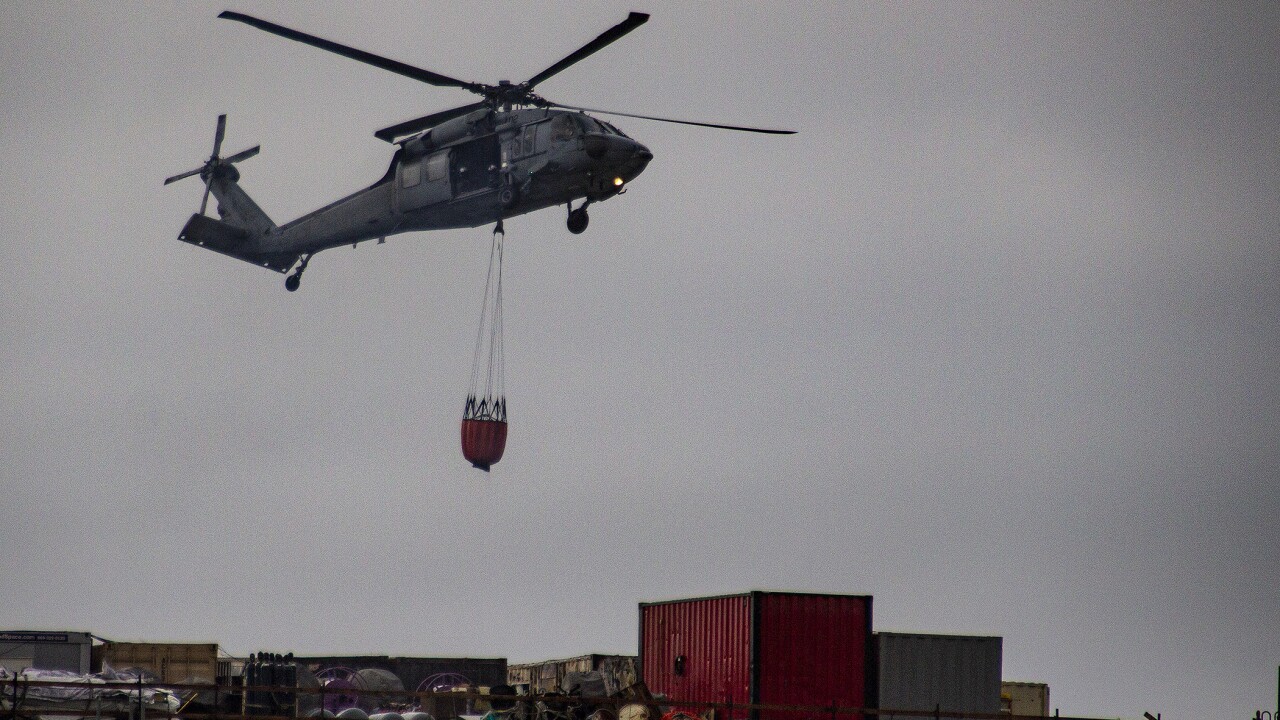 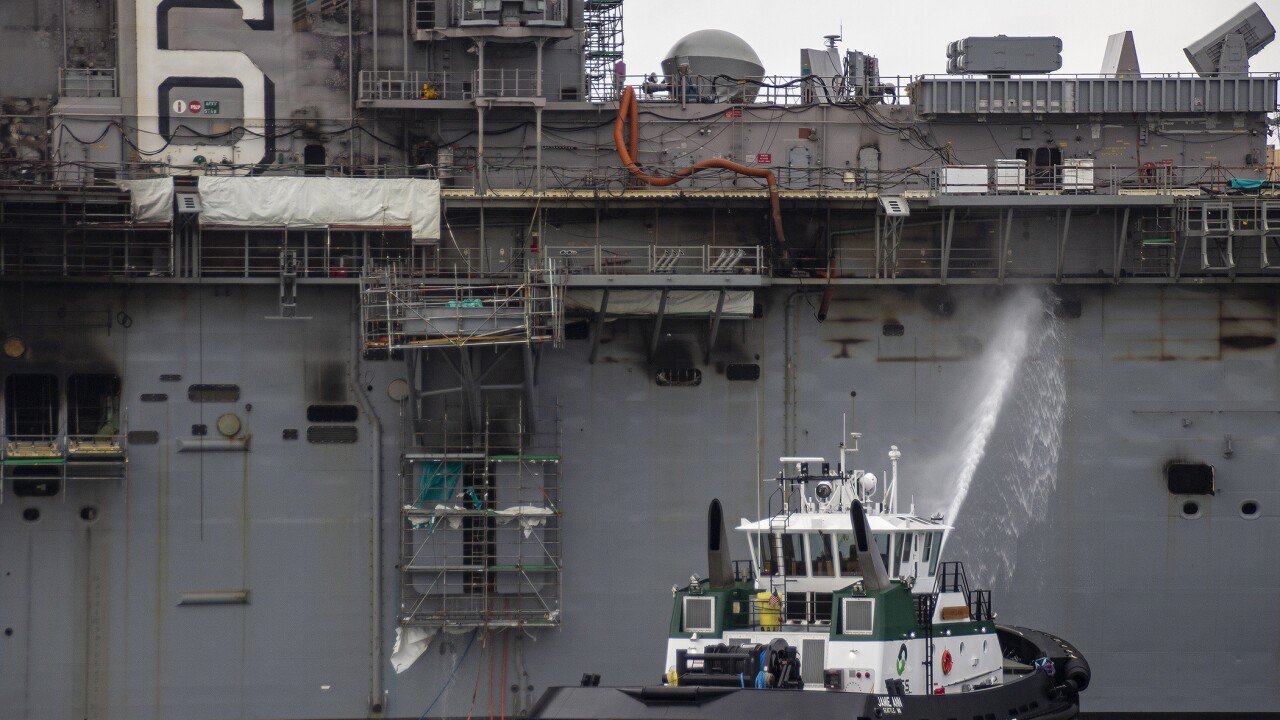 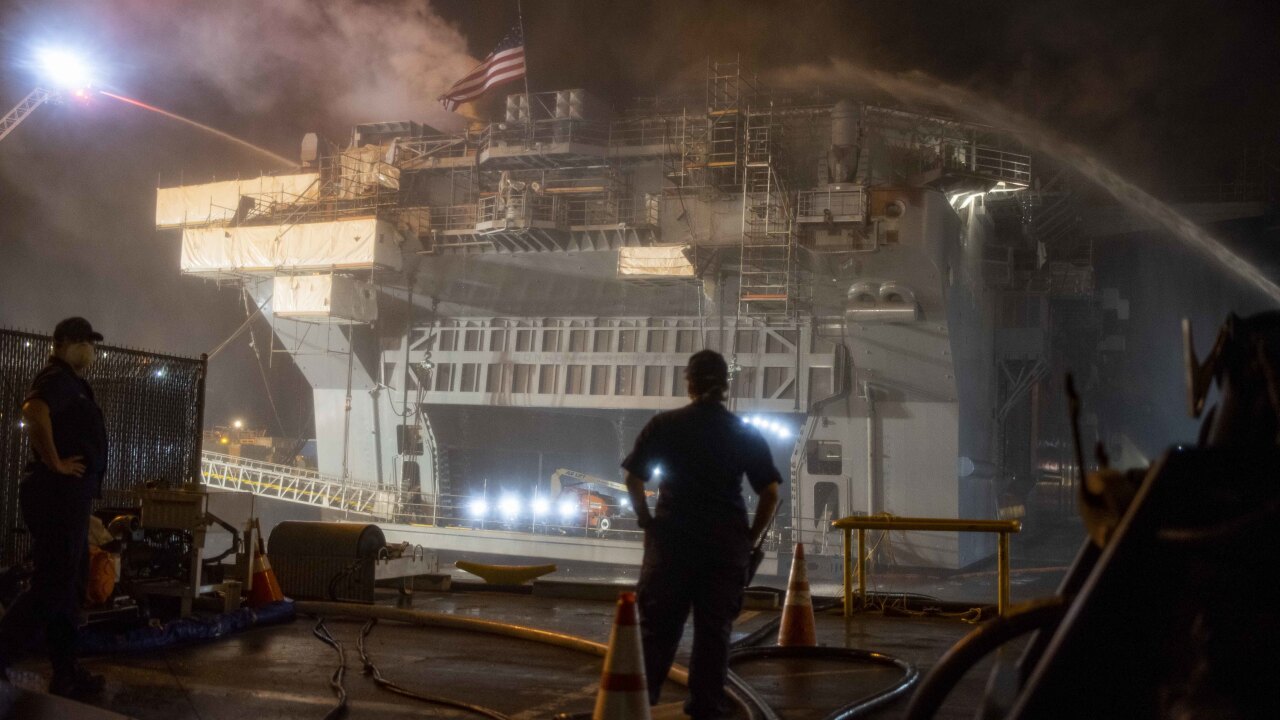 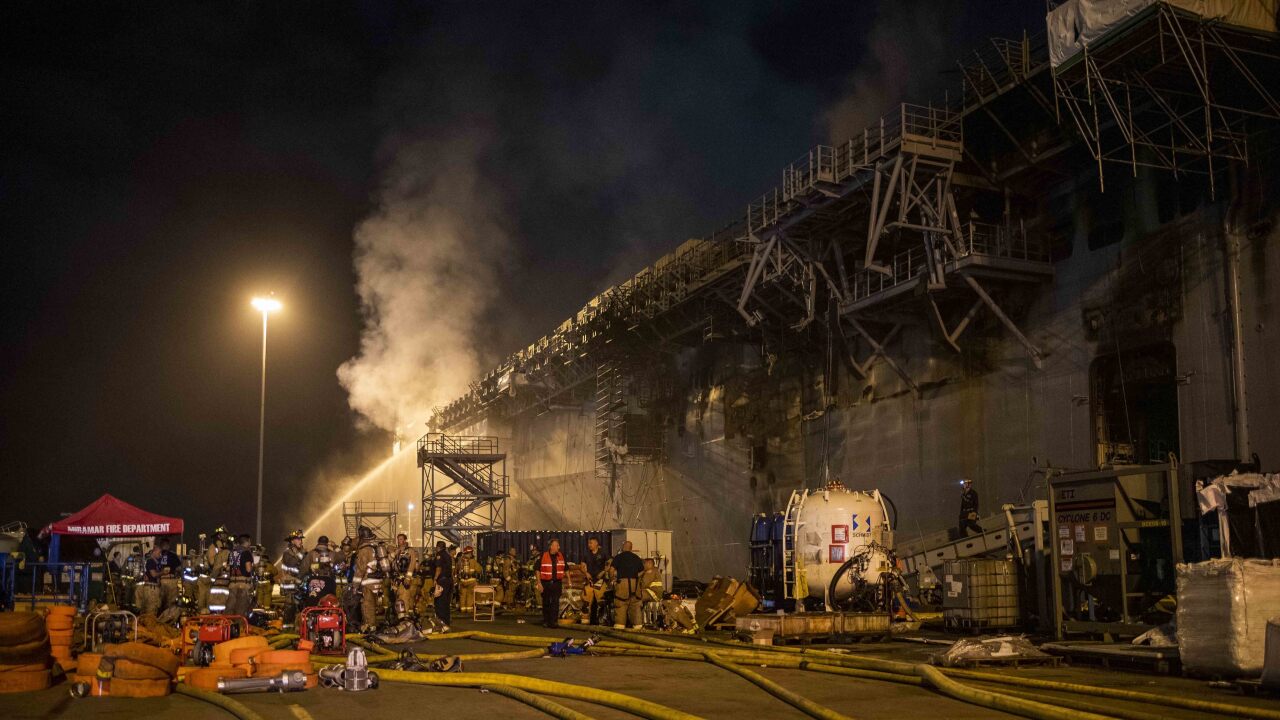 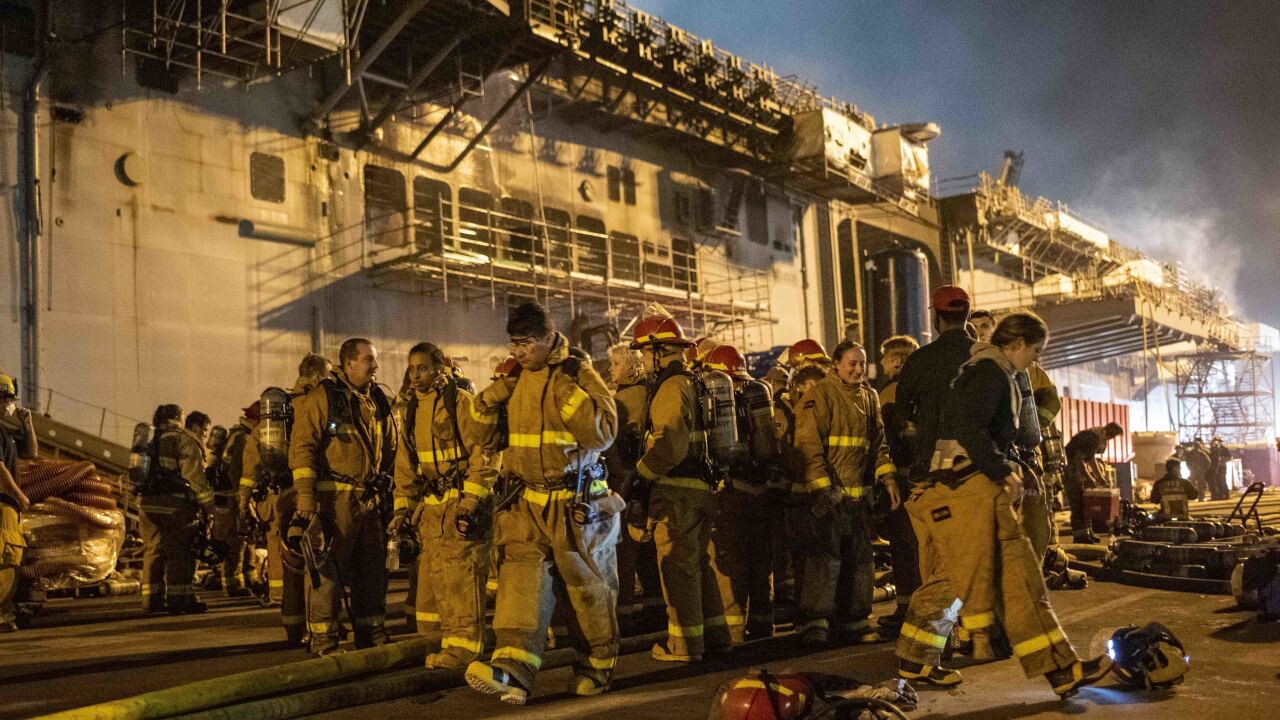 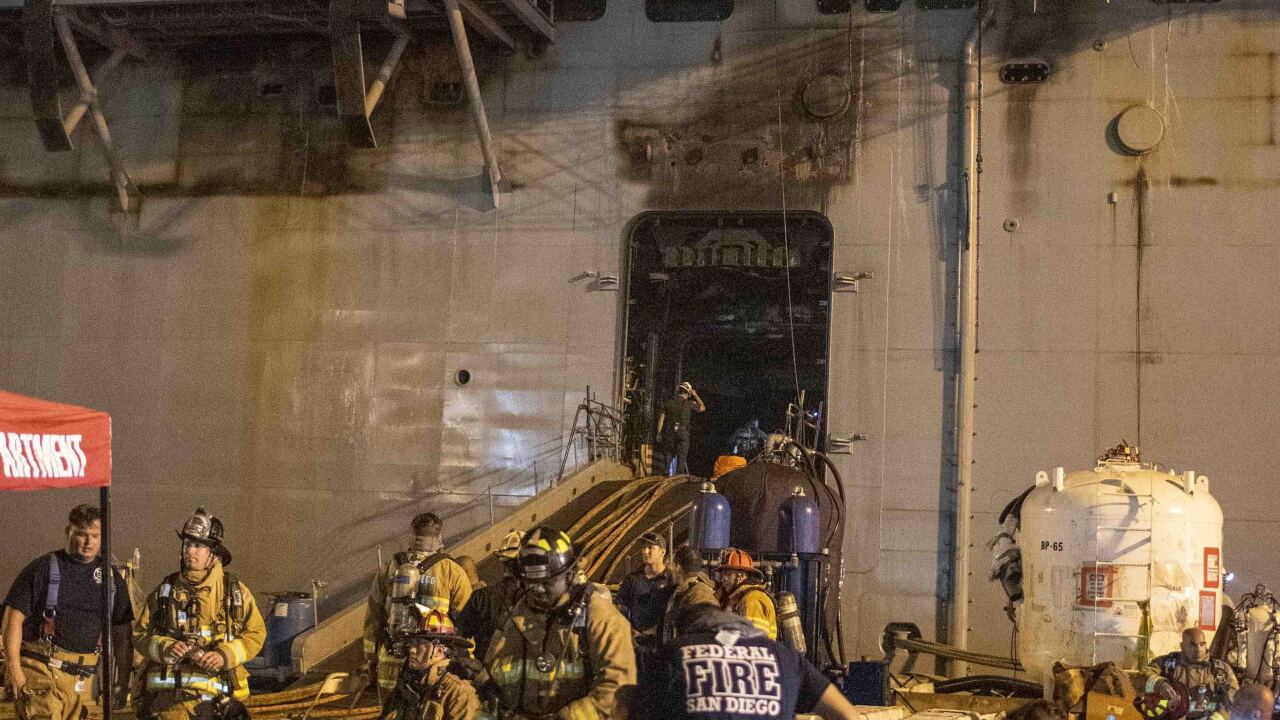 SAN DIEGO, Calif. - Crews are still trying to extinguish a large fire that broke out on the USS Bonhomme Richard Sunday morning.

The fire was reported on July 12 as the amphibious assault ship was in a maintenance period at Naval Base San Diego.

Since then, civilian firefighters and Navy fire crews have worked around the clock trying to put out the blaze.

As of Thursday morning, 63 people had been treated for minor injuries from the fire, with the majority being smoke inhalation and heat exhaustion. 40 of those people are Sailors. No one is currently in the hospital.

A multi-pronged approach is being used to fight the fire. Helicopters from Sea Combat Squadron 3 have dropped more than 1,500 buckets of water on the Bonhomme Richard.

Those operations have been targeted at cooling the super-structure and flight deck, which is enabling crews to get onboard and fight the fire internally.

Tugs have also provided firefighting support from the waterline.

More than 400 Sailors from a dozen San Diego-based ships are helping to fight the fire.

Damage assessments on the ship are ongoing, but the Navy says so far the four main engineering spaces have no major damage.

The fire has also stayed away from the fuel tanks, with Rear Admiral Philip Sobeck saying there is no threat there and adding "the ship is stable and the structure is safe," during a news briefing Tuesday.

On Wednesday, the Navy cleared the pier and ship of people due to a shift in the ship's list, but crews were back on the pier on Thursday.

The Navy and NCIS are also warning people to be mindful of possible scams of people establishing fake GoFundMe and other fundraisers for Sailors.

The Navy says it is taking care of all essential items for Bonhomme Richard Sailors affected by the fire.

An investigation is underway to determine how the fire started.