Alex Brandon/AP
President Donald Trump gestures as he boards Marine One on the South Lawn of the White House, Wednesday, Jan. 20, 2021, in Washington. Trump is en route to his Mar-a-Lago Florida Resort. (AP Photo/Alex Brandon)
By: The Associated Press
Posted at 4:34 PM, Feb 05, 2021

WASHINGTON (AP) — A majority of Americans say former President Donald Trump bears at least some blame for the Capitol insurrection. And about half say the Senate should vote to convict Trump at the end of his impeachment trial.

That’s according to a new poll by The Associated Press-NORC Center for Public Affairs Research.

A Senate trial on the article of impeachment for incitement of insurrection that Trump faces begins Feb. 9.

Nearly two-thirds of Americans believe that Trump bears at least a moderate amount of responsibility for the breach of the U.S. Capitol, including half who say he bears a great deal or quite a bit. Just over a third say he bears little to no responsibility.

Most Republicans absolve him of guilt, but about 3 in 10 think he bears at least a moderate amount of blame for the events.

Fewer Americans, 47%, believe the Senate should vote to convict Trump after his impeachment trial, which begins next week. Another 40% say he should not be convicted, and 12% aren’t sure. Trump last month became the first president in the nation’s history to be impeached twice by the House, but it appears unlikely Democrats will have enough votes to convict him in the upper chamber. 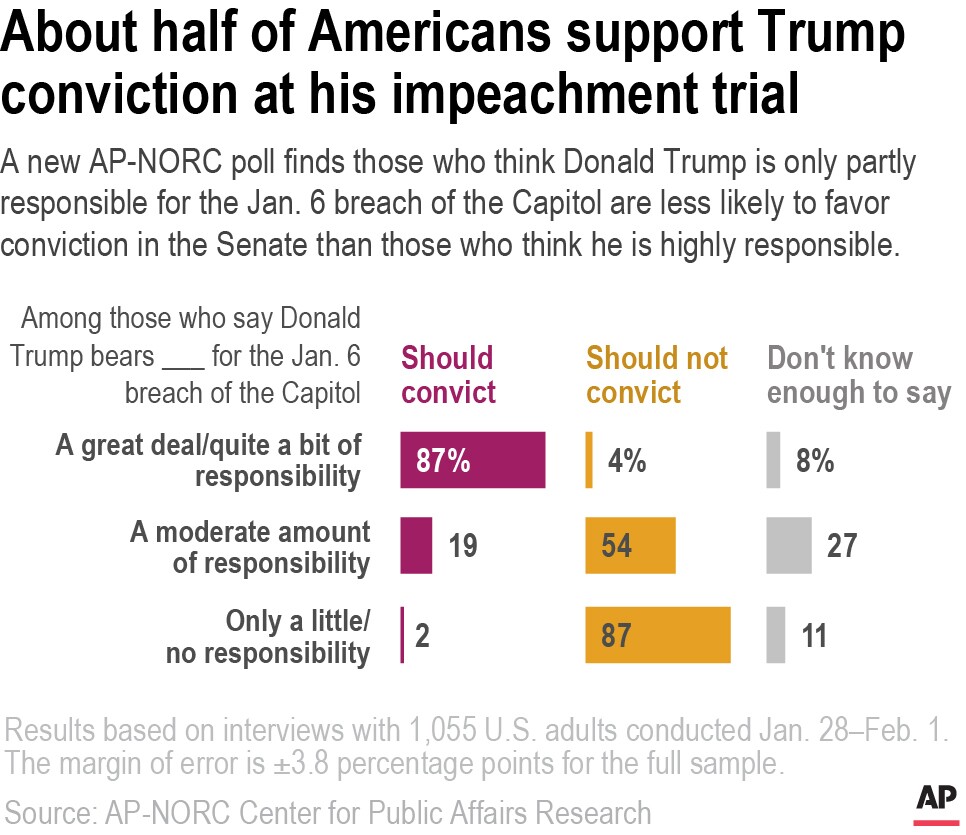 The poll also finds many Republicans continue to believe — contrary to all evidence — that President Joe Biden’s election was illegitimate.

It’s the latest sign that Trump’s monthslong disinformation campaign will have long-lasting ramifications for Biden as he tries to govern a fractured country.