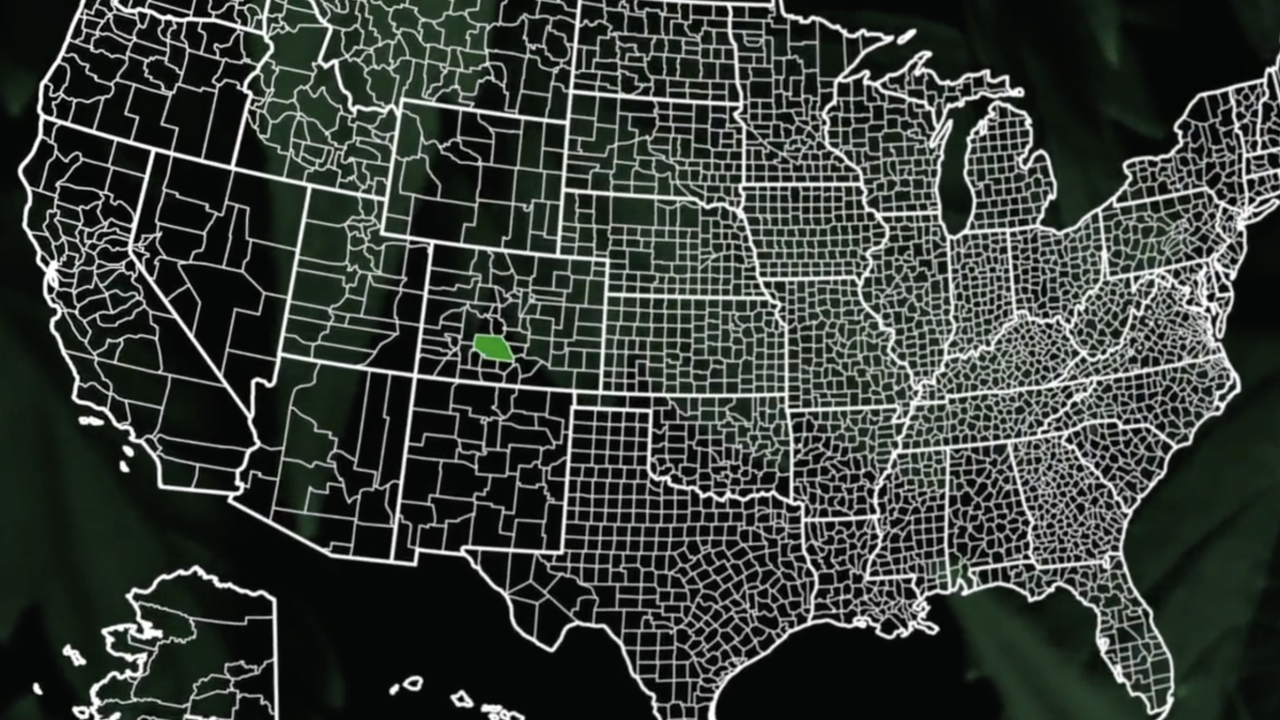 Saguache County, Colorado is larger than the states of Delaware and Rhode Island combined.

It is a valley surrounded by mountain peaks that draws people who are looking for the secluded lifestyle that rural America can offer.

“Everybody knows everybody,” said Doug Peeples, who owns a grocery market in the county seat of Saguache.

The town of Saguache is small, having never boasted more than 700 full-time residents in the last 30 years. The county is even more dispersed as the population density is less than two people per square mile.

Then, in 2014, all of that changed once Colorado became the first state in the country to legalize recreational marijuana.

“I would venture to guess we saw 2,000 to 3,000 people in overnight,” said Saguache County Sheriff Dan Warwick.

“All of a sudden we had an influx of people that were out-of-towners,” added Peeples.

Located in the southern part of Colorado, the county became a destination for people from neighboring states who wanted to use the weed recreationally, but particularly those who wanted to start grow operations before returning the product back to their home state-- something that is illegal.

“With only six deputies, how do you try and catch these bad actors?” said Warwick. “You just hope to come across it.”

The influx led to squalor and crime as sheds laid abandoned after people would use them for growing marijuana before skipping town once they harvested.

“You’d see people come in and they would grow on a piece of property that they leased for a short period of time,” said Warwick. “They would leave all their trash and junk everywhere and then just pack up and leave.”

It became a divisive issue in the county as full-time residents would be left to deal with the mess.

“For a while, this place was the Wild Wild West,” said county commissioner Jason Anderson.

Anderson, along with the rest of the county commissioners, worked to find a solution by passing an excise tax in 2016 that would give them 5 percent of the profits when legal growers would sell to retailers.

In theory, the legislation would allow the county to benefit from something that had caused so much turbulence as the commissioners allocated money to go towards schools, enforcement, and other areas that needed improvement, but it started off slow.

“The first year [of the tax] we only saw $6,000, again, because the legal operations weren’t up and running yet,” said Anderson.

“We hired a code enforcement officer and outfitted him with everything he needs full-time, which is something we could never even think about beforehand,” said Anderson.

The county also set up a scholarship fund for local students planning to go to college and helped others get to school by updating trail systems that encouraged kids to walk in a county where the childhood poverty rate is 46 percent.

“I think we are better off [from the legalization of marijuana] in that we need all the resources we can to continue to adapt to the changes.”

Some places in town still have yet to see the money as some storefronts along the town of Saguache’s main street still lay vacant, but the county hopes as the tax money grows each year, so does prosper in the town.