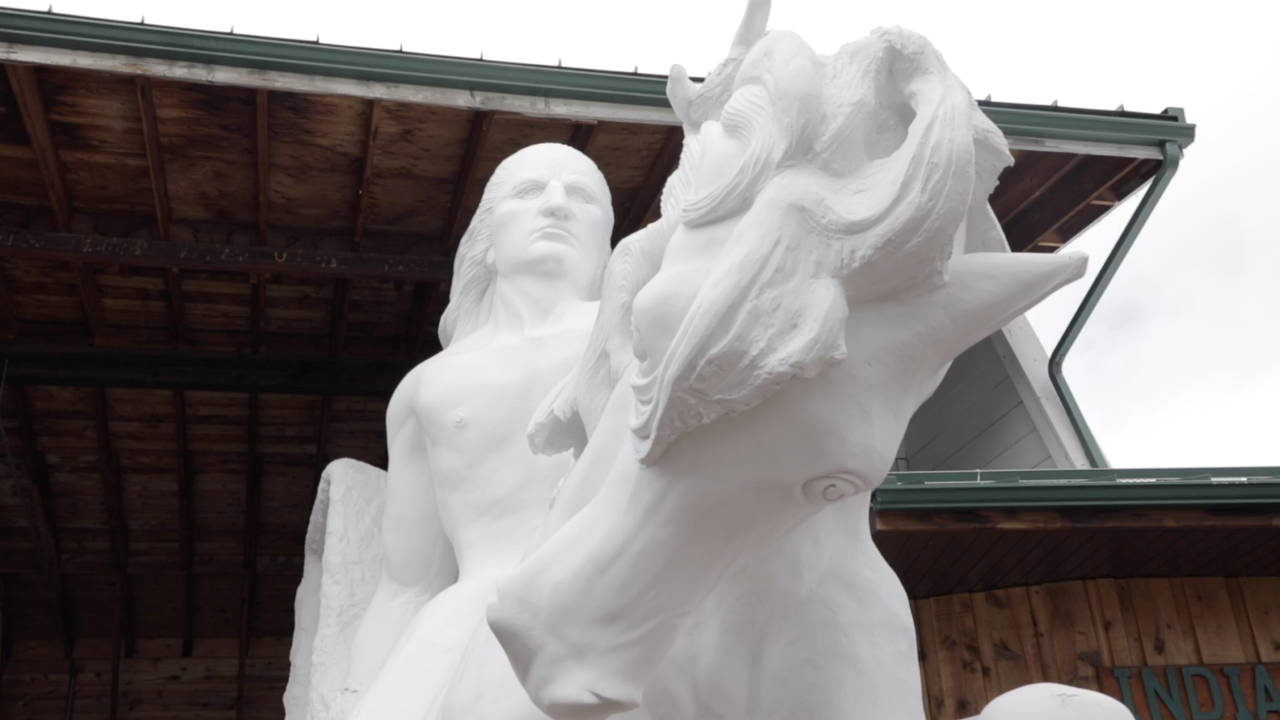 It’s just after 10 a.m. and Terry DeRouchey is driving up the trail to see the base of what will be the highest stone structure in the world. That is if it’s ever finished.

“This is supposed to be representative of all Native Americans, and it’s just a special kind of feeling that I have,” DeRouchey said.

It’s more than a monument to Crazy Horse, the legendary Lakota Warrior who fought in the battle of Little Big Horn against General Custer. It’s a whole mountain.

“So, the face up there is 87.5 feet tall and all that red rock behind his face where it meets the grey rock in the back is where they’re going to carve his hair. And once the get his hair carved in, you could fit all four heads of Mt. Rushmore into his head,” described DeRouchey.

In the 1940s, Chief Standing Bear wrote to the sculptor, Korczak Ziolkowski, and asked him to create a monument for Crazy Horse. On June 3, 1948, Korczak made the first blast and the project was started.

“We carve the mountain because it represents all the nation's indigenous people of the North American continent. My name is Monique Ziolkowski. Because I was born here, all of our brothers and sisters were born here. This just happened to be a project that mother and dad started in 1948,” said Monique Ziolkowski, the ninth of 10 children of Korczak and Ruth Ziolkowski.

She’s continuing the work of her family seven decades later.

“Dad carved many things into stone, and he felt he was a storyteller in stone. This just happens to be a bigger piece of stone,” said Ziolkowski.

On Oct. 20 of each year, the memorial pays tribute to Monique’s father. The day marks the anniversary of his death.

Nearly 600 feet up above Korczak’s tomb, the work continues. Some of his grandsons are up there carving away at the hard rock of the Black Hills. The project continues to be a family affair.

“Two of our nephews work on the mountain and then one of our nieces works in the archive room,” said Ziolkowski.

However, it’s more than just a monument. The plan includes a welcome center, Native American museum, and The Indian University of North America, for students just finishing high school.

The foundation’s funding comes from donations and visitors from across the country.

While the work has been ongoing for 72 years, there is no timeline to finish and no exact estimate on cost. But the family and foundation will press on because this is the story they’ve chosen to tell in stone

“There’s all kinds of great stories out there, this is just one of them," said Ziolkowski.