White House Chief of Staff briefs reporters, telling them that President Donald Trump is experiencing mild symptoms and is in good spirts after contracting COVID-19. 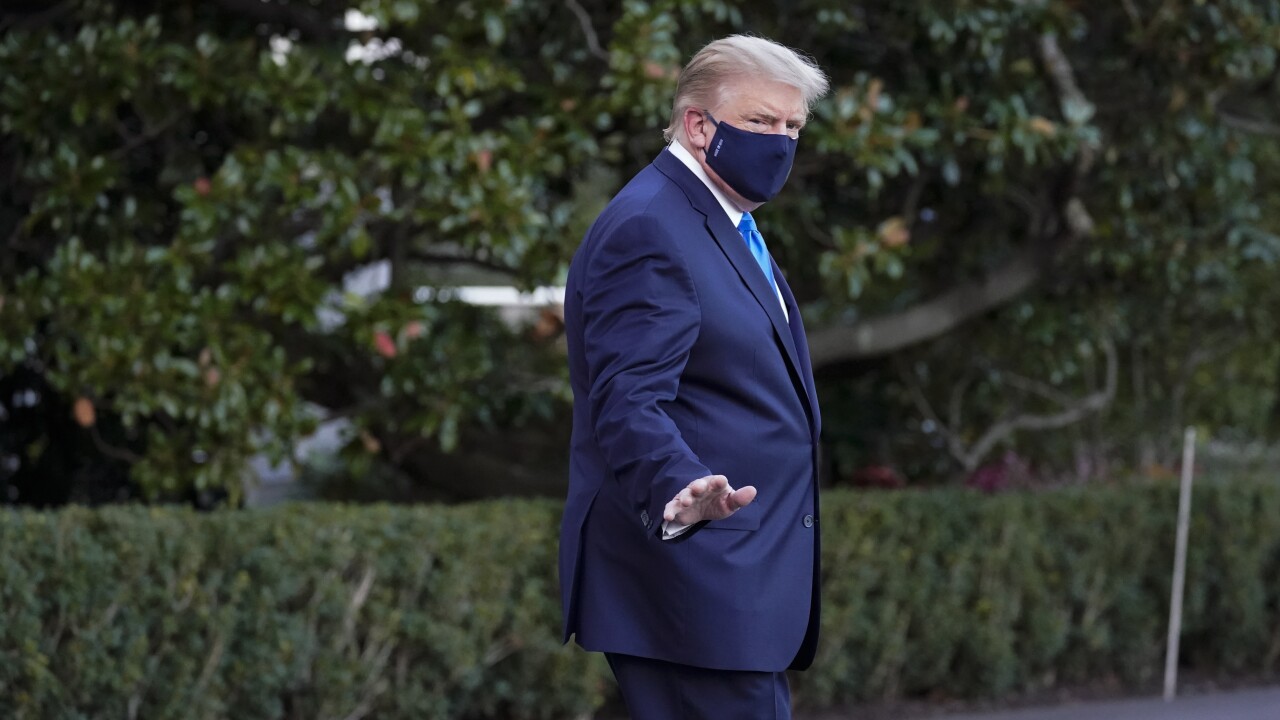 President Donald Trump was hospitalized Friday evening, nearly 18 after announcing on Twitter that he and wife Melania Trump tested positive for the coronavirus.

Trump emerged from the White House around 6:16 p.m. ET on Friday wearing a suit and tie as he entered Marine One. He gave a thumbs up to reporters as he left, but didn’t take any questions.

He filmed a video that staffers posted to his Twitter account as he landed at Walter Reed Hospital.

Trump’s visit to Walter Reed was out of an “abundance of caution.”

“President Trump remains in good spirts, has mild symptoms, and has been working throughout the day," White House Press Secretary Kayleigh McEnany said. "Out of an abundance of caution, and at the recommendation of his physician and medical experts, the President will be working from the presidential offices at Walter Reed for the next few days. President Trump appreciates the outpouring of support for both he and the First Lady.”

The president will have access to some of the nation’s best doctors at Walter Reed Hospital. There is also a presidential suite complete with offices and space for him to work.

Conley confirmed that the president was taking a variety of treatments, most notably the Regeneron antibody cocktail, which has only been tried on 275 patients as part of an early trial. Conley added that Trump is taking Vitamin D, zinc, famotidine, melatonin and daily aspirin.

Later on Friday, Conley confirmed Trump was taking Remdesivir. The doctor also confirmed that Trump was not needing supplemental oxygen.

Trump released a prerecorded video from the White House that was published on his Twitter account as he arrived at the hospital.

Trump originally was slated to meet supporters for a roundtable at his D.C. hotel followed by a rally in Florida. Those events were scrapped as soon as the diagnosis was announced.

Trump still had planned on participating in a call to discuss COVID-19 support for vulnerable seniors. Vice President Mike Pence ended up pinch hitting for Trump on the call. The president was not seen or heard from until he left the White House to visit Walter Reed.

Others close to Trump among those with the virus

Thank you for the love you are sending our way. I have mild symptoms but overall feeling good. I am looking forward to a speedy recovery.

Sens. Mike Lee and Thom Tillis, former White House aide Kellyanne Conway Notre Dame President John I. Jenkins and RNC Chair Ronna McDaniel all announced they were positive for the coronavirus on Friday. Hicks, Conway, Lee, Tillis and Jenkins were in attendance for last Saturday’s announcement that Trump would chose Amy Coney Barrett to be the next Supreme Court Justice.

All but Tillis are symptomatic.

The Trump campaign has suspended all events involving the president’s family indefinitely.

Trump campaign manager Bill Stepien said Friday that all "previously announced campaign events involving the President's participation are in the process of being moved to virtual events or are being temporarily postponed."

Meanwhile, a scheduled debate between Sen. Kamala Harris and Pence is still on for Oct. 7.

Based on CDC guidelines, those who have the coronavirus should isolate for 10 to 20 days depending on the severity of the virus. The, presidential election is in 32 days, meaning there might not be much time for Trump to resume campaigning following his isolation period.

Former Vice President Joe Biden, who shared a debate stage with Trump on Tuesday, had to make adjustments to his campaign on Friday.

Biden waited for two negative coronavirus tests before traveling to Michigan for a campaign stop there. He opted to hold the event outside, and Biden spoke while wearing a mask.

Biden offered his well wishes to the president.

“Sending my prayers for the health and safety of the first lady and president of the United State safter they tested positive for COVID-19,” Biden said. “My wife Jill and I prayed that they'll make a quick and full recovery. This is not a matter of politics. It's a bracing reminder to all of us that we have to take this virus seriously.”

While it is unclear exactly when Hicks informed White House officials of her diagnosis, the Trump campaign was scrutinized on Thursday for continuing with its public schedule, which included a campaign event in New Jersey.

Gov. Phil Murphy of New Jersey said that those who attended Trump’s event should get tested for the coronavirus.