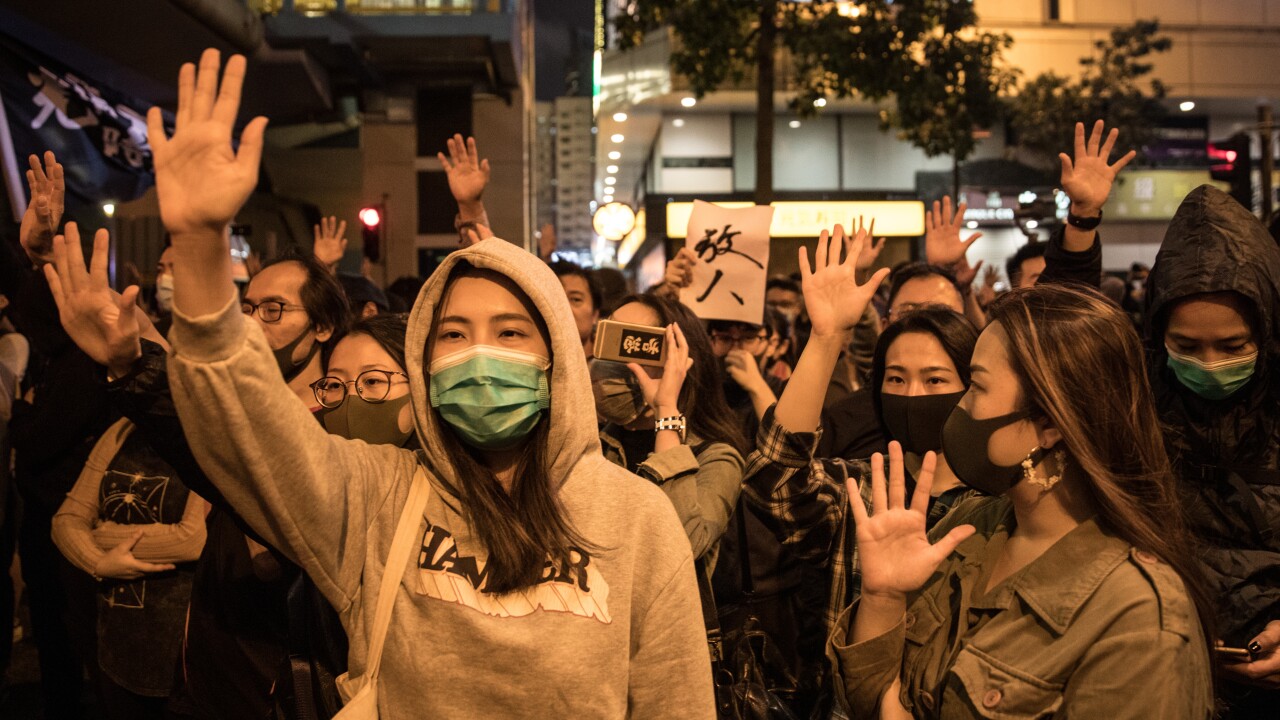 More than 2.9 million people turned out to vote in Sunday's elections, which have been framed as a de facto referendum on the almost six months of ongoing protests in the semi-autonomous Chinese city. With more than 95% of constituencies declared , pro-democracy candidates appeared to have won a landslide victory.

Speaking to CNN, Kenneth Chan, an expert on politics and governance at Hong Kong Baptist University, said the more than 70% turnout -- higher than any other election in the city's history -- "exceeded many predictions" and demonstrated both Hong Kongers' commitment to democracy and that they are "counting on this election to point a way out of this impasse."

Public broadcaster RTHK described the results as a "rout" and a "staggering victory for the pro-democracy camp," with the majority of the 18 district councils expected to flip to pro-democratic control in an "unmistakable message" to the city's leader Carrie Lam.

Opposition candidates took nearly 90% of the seats up for grabs, the broadcaster reported.

After weeks of increasingly violent unrest, this weekend was remarkably calm, following calls for protesters to avoid giving the government any excuse to call off the elections or close polling stations early.

In a statement Monday, the city's leader Carrie Lam said her government "respects the election results."

"There are various analyses and interpretations in the community in relation to the results, and quite a few are of the view that the results reflect people's dissatisfaction with the current situation and the deep-seated problems in society," she said. "(The government) will listen to the opinions of members of the public humbly and seriously reflect."

Holden Chow, Horace Cheung, Vincent Cheng, and Edward Lau also appeared to be part of a string of upsets from the pro-Beijing DAB party, according to RTHK, as votes continued to be counted.

One of the conveners with the Civil Human Rights Fronts (CHRF), Jimmy Sham, claimed a victory for the pro-democracy camp in his district of Sha Tin. CHRF has organized some of the largest marches during Hong Kong's nearly six months of civil unrest.

"Today's result represents (my constituency's) support to protesters. The government should immediately establish the Five Demands and respond to the public's voices," he posted on Facebook, referencing a longstanding protest slogan.

And in an apparently narrow win for the pro-Beijing camps, lawmaker Starry Lee secured her re-election against pro-democracy challenger Leung Kwok Hung in Kowloon city district's To Kwa Wan North.

Supporters of Leung Kwok Hung began chanting "Liberate Hong Kong, Revolution of Our Time" after the local counting station tallied up the votes, with Lee winning by just 300 votes.

District councils are elected on four-year terms, and largely handle local affairs. They lack much in terms of real power, serving mainly to advise the government on issues affecting their neighborhoods and the allocation of funds for local projects.

The vote has taken on an outsized importance in recent years, however, as a way of signaling wider discontent about the slow pace of political reform. Ahead of Sunday's vote, pro-Beijing parties controlled all 18 district councils, so any victory for the broader pro-democracy camp will inevitably be cast as a win for protesters.

More than 2.9 million people took part in Sunday's poll, with a turnout rate of 71.2% -- a record high, based on the highest-ever amount of registered-voters, according to Barnabus Fung, the chairman of the Electoral Affairs Commission.

Polling stations closed late on Sunday night. While election officials have reported results after counting finished in some polling stations, no complete tally has been uploaded by the official elections commission. It is the first time that all 452 constituencies are being contested.

Those five demands are: withdraw the extradition bill that kicked off the entire crisis (since achieved); launch an independent inquiry into allegations of police brutality; retract any categorization of a protest on June 12 as a "riot"; amnesty for arrested protesters; and introducing universal suffrage for how the Chief Executive and Legislative Council are elected.

A big loss for pro-government parties -- as appears to be on the cards -- could increase pressure on Hong Kong leader Carrie Lam to come up with a political solution to address at least some of those demands.