News 3 gets a first look at Virginia's offshore wind project 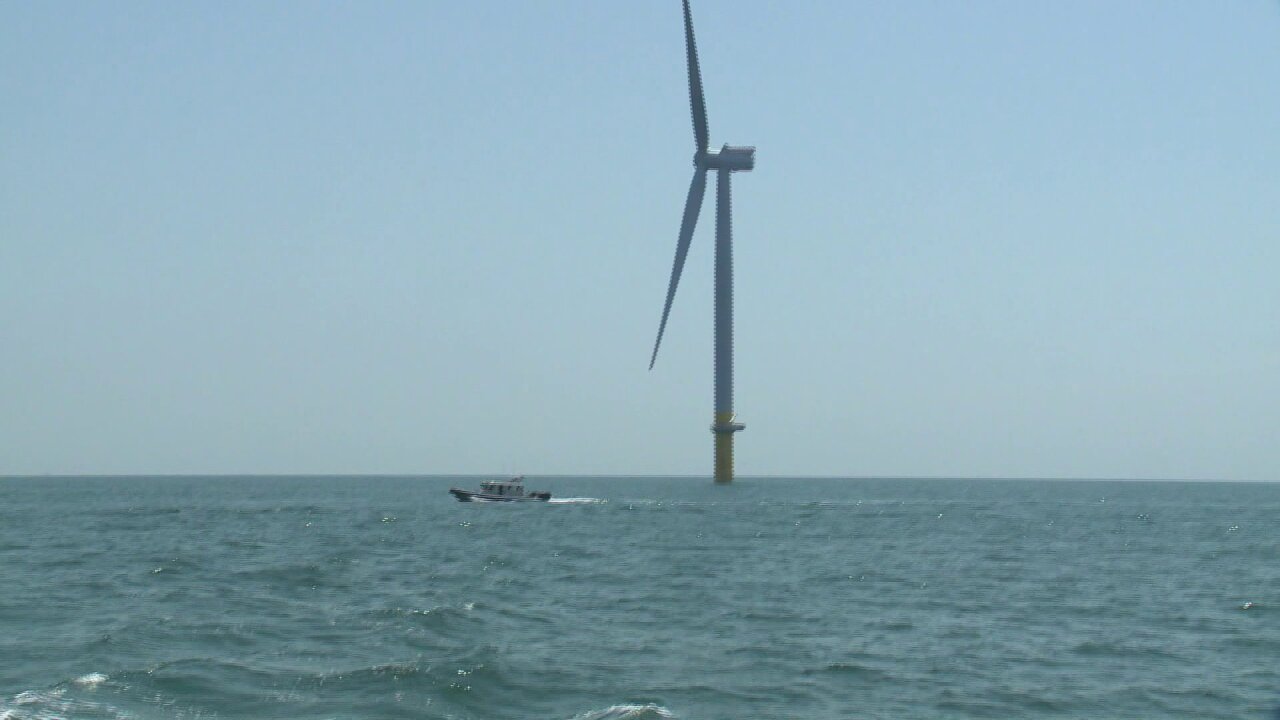 VIRGINIA BEACH, Va. – We’re getting our first look at the Commonwealth’s offshore wind project. It’s in the Atlantic Ocean just off the Virginia Beach coast.

News 3 Photojournalist John Rector got a closer look at the project Tuesday.

This is the first offshore wind project to be installed in federal waters. Once completed, the two six-megawatt wind turbines will provide enough electricity to power 3,000 homes.

“This project makes Virginia a national leader in America’s transition to renewable energy,” Northam said Monday after signing the legislation. “Coupled with newly-signed offshore wind legislation, we are building a new industry that will bring thousands of clean energy jobs to our Commonwealth and grow our economy—all while protecting our environment. This is a significant step forward for workers, for business, and for our planet.”

Dominion Energy partnered with Ørsted, a Denmark-based energy company, to build the project on 2,135 acres leased by the Virginia Department of Mines, Minerals and Energy (DMME). This pilot project will produce valuable research and development for stakeholders including the military, commercial and recreational interests and other governmental entities.

The project will also serve as a first step toward development of commercial-scale offshore wind off the coast of Virginia.

Earlier this year, the Virginia Port Authority’s Board of Commissioners approved an agreement for Ørsted to lease up to 40 acres of the Portsmouth Marine Terminal for offshore wind staging materials and equipment. Portsmouth Marine Terminal is one of the Port of Virginia’s two multi-use terminals in the Norfolk Harbor. Covering 287 acres, the facility is located on deep water, has on-dock rail access and offers open space for storage and staging.

“This research project will help pave the way for further economic development that will help to diversify the Hampton Roads economy,” said Secretary of Commerce and Trade Brian Ball. “The signature offshore wind legislation sets the stage for Virginia to lead the way in the development of offshore wind and sends another important signal to the offshore wind supply chain companies that are considering locating their operations within the Commonwealth.”

The legislation the governor signed establishes a target for Virginia to generate 5,200 megawatts of offshore wind energy by 2034, providing a path for development of at least two offshore wind projects that are currently planned to interconnect into Virginia.

These measures will help to ensure healthy competition in the procurement of offshore wind projects, bringing diverse offshore wind companies to Virginia to compete in the market and lower costs for Virginia consumers. This legislation will also provide certainty to the offshore wind industry by creating a pathway for project developers to recover their costs, while containing costs and protecting low-income Virginians.

The two 600-ft. tall turbines were installed in May and June and are expected to be fully in service in the fall.