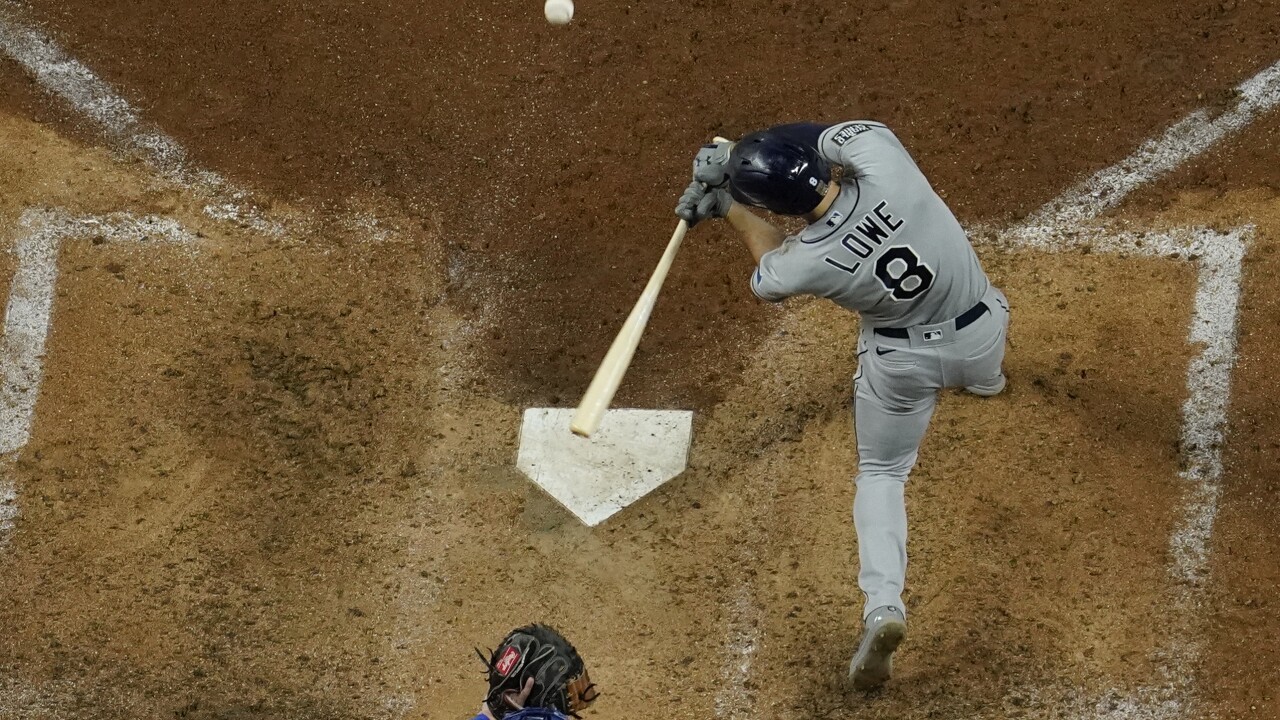 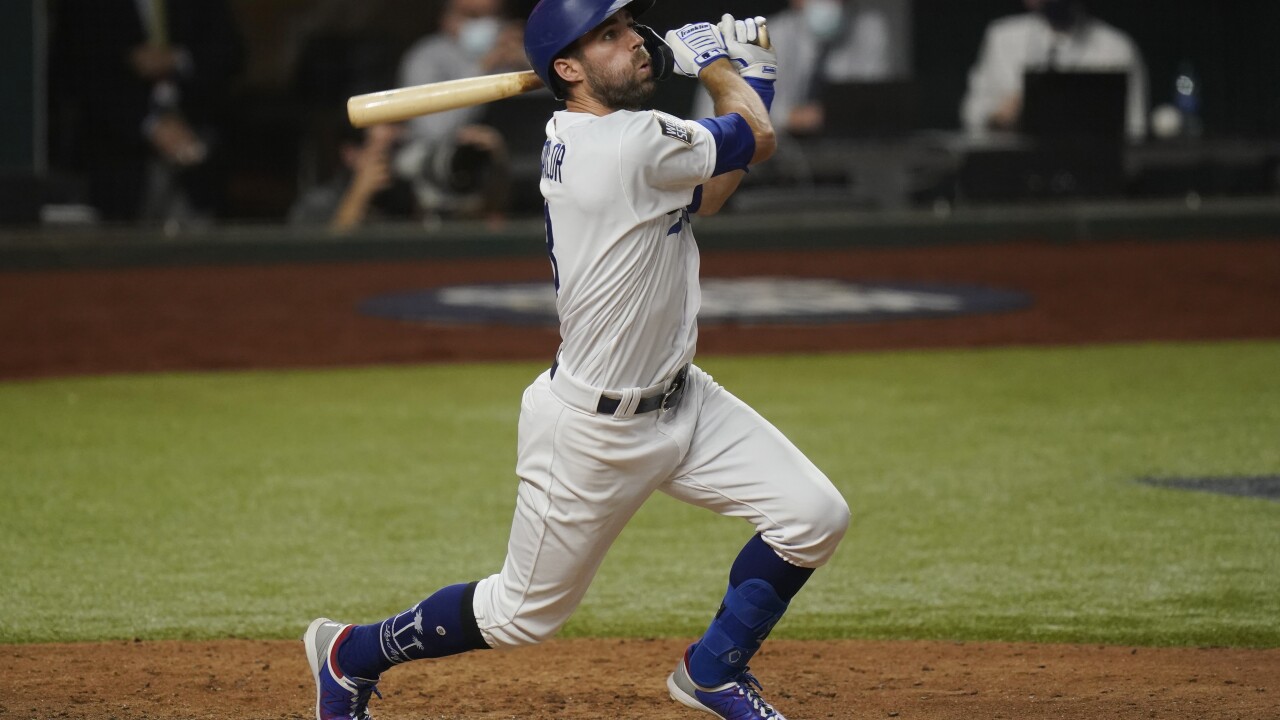 Rays and Dodgers, tied in Texas.

Lowe shook loose from his extended postseason slump with two opposite-field home runs, and Tampa Bay held off Los Angeles 6-4 on Wednesday night to square the World Series at one game apiece.

“Yeah, those felt really good,” said Lowe, a 2019 All-Star who led the Rays with 14 homers and 37 RBIs this season. “It felt great to kind of get back and contribute to the team. You know, they’ve been doing so well for the past month — it felt really good to get back and actually start doing stuff again.”

Blake Snell struck out nine in 4 2/3 innings for the Rays and didn’t allow a hit until Virginia Beach's Chris Taylor’s two-run homer trimmed it to 5-2 in the fifth. The Dodgers threatened to complete a big comeback in the eighth, but Tampa Bay’s relievers held firm.

Lowe and Joey Wendle each drove in three runs for the Rays.

Hear from the guys live in their postgame interviews after a World Series Game 2 win. https://t.co/ngeDyd2tfy

Nick Anderson got four outs for the win. Diego Castillo earned the save when he struck out Taylor, the only batter he faced.

Left-hander Aaron Loup also did a nice job, throwing a called third strike past Cody Bellinger with a runner on second to end the eighth before retiring the first two hitters in the ninth.

After an off day, Game 3 in the best-of-seven Series matches two big-game pitchers starting on extra rest Friday night. Charlie Morton gets the ball for Tampa Bay against Walker Buehler.

Lowe hit an opposite-field solo homer to left-center in the first off Tony Gonsolin, putting the American League champion Rays ahead for the first time at this neutral-site World Series with their 27th home run of the postseason, matching a major league record. The second baseman was hitting .107 this postseason, and in an even worse 4-for-48 slide (.083) the past 13 games since the start of the AL Division Series.

“Sometimes guys, you’ve got to allow them to go through some tough patches, and he’s been in one,” Rays manager Kevin Cash said. “He will go quiet for a little while, but he can get as hot as anybody in baseball.”

By the time he went deep again in the fifth, his second opposite-field shot of the game and the entire season — with a runner on against Dustin May, already the fourth Dodgers pitcher — it was 5-0.

Will Smith and NLCS MVP Corey Seager also homered for the Dodgers. Seager’s solo shot in the eighth was his seventh homer and 16th RBI, extended the franchise records he had already set this postseason. Those are also the most homers by a shortstop in any MLB postseason.

Snell already had all his strikeouts when he walked Kiké Hernández with two outs in the fifth before Taylor, the No. 9 batter, homered on his 80th pitch. The Rays ace was out of the game two batters later, after Mookie Betts walked and Seager singled.

“He was outstanding,” Cash said. “The slider from my vantage looked like it was a really good weapon for him. He was awesome. Gave us everything that we needed.”

Anderson got out of the jam with a strikeout of Justin Turner.

The Dodgers knew it would be primarily a bullpen game using various arms, instead of bringing back Buehler on short rest after ace lefty Clayton Kershaw threw six strong innings in their 8-3 win Tuesday night in Game 1.

Four of the first five LA pitchers allowed runs, with Dylan Floro keeping a clean slate after benefiting from a nice defensive play and a replay review that ended the second. The Dodgers were the first team to use four pitchers within the first four innings of a World Series game since the Oakland Athletics against Cincinnati in Game 3 of the 1990 World Series.

Gonsolin, the rookie right-hander who started, allowed Lowe’s first homer and was done after 1 1/3 innings. That was the shortest start in a World Series game since San Francisco’s Jake Peavy was done after giving up five runs in 1 1-/ innings in a 10-0 loss at Kansas City in Game 6 of the 2014 World Series.

Snell threw only 10 pitches in a 1-2-3 first that included strikeouts of Betts and Turner. After 11 of his first 15 pitches in the second inning were balls, among two walks and a strikeout, the 2018 Al Cy Young Award winner retired the next 10 batters until the walk to Hernández in the fifth.

The left-hander was attacking with breaking pitches in the strike zone, not his usual pattern, since the Dodgers don’t often chase. But Los Angeles didn’t get many bats on the ball against him. But less than a week after an aggressive hook by Cash to take Snell out of Game 6 of the ALCS after four innings, he still hasn’t completed six innings in a game since July 2019.

Smith homered for Los Angeles in the sixth off Anderson.

A bobble by Hernández at second base proved costly, taking away a potential inning-ending double play in the fourth before the Dodgers changed pitchers again and gave up two runs.

With one out and Randy Arozarena at first, Ji-Man Choi hit a grounder to Hernández, and by time the second baseman gathered the ball to get the force, Seager’s relay throw was late. Manuel Margot then greeted May, the third reliever, with a single before Wendle’s two-run double into the right-center gap for a 3-0 lead.

Wendle added a sacrifice fly in the sixth.

Rays: Morton faces the first time since the 2017 World Series, when he pitched the final four innings for the Astros in Game 7. Morton also pitched in Game 4 that Series, when he limited LA to one run and three hits while striking out seven over 6 1/3 innings — a game the Dodgers won 6-2 after a five-run ninth.

Dodgers: Buehler’s only previous World Series start was Game 3 against Boston in 2018, when he threw seven scoreless innings in the only game the Dodgers won against Betts and the Red Sox in that Series.