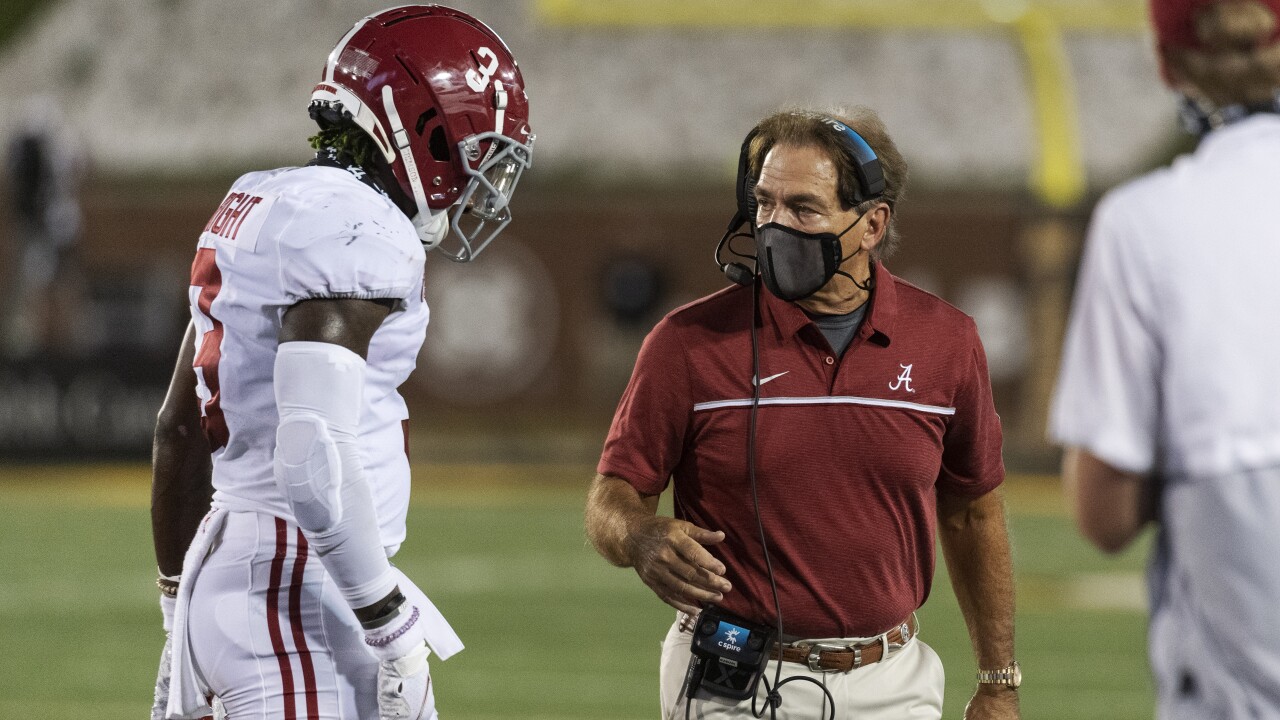 L.G. Patterson/AP
Alabama head coach Nick Saban, right, talks with Daniel Wright as he walks off the field during the second half of an NCAA college football game against Missouri, Saturday, Sept. 26, 2020, in Columbia, Mo. (AP Photo/L.G. Patterson)

Both said their tests Wednesday morning came back positive, but Saban said he didn’t have any symptoms by late afternoon. In a game to be televised live on News 3, the second-ranked Crimson Tide is set to face No. 3 Georgia on Saturday, and may be without their iconic 68-year-old coach.

“I immediately left work and isolated at home,” Saban said. He remained scheduled to talk to the media Wednesday evening.

Saban said he informed the team via a Zoom call at 2 p.m. Wednesday, about an hour after he learned of the test results, and that offensive coordinator Steve Sarkisian will oversee game preparations within the football building while he works from home.

Saban said Sarkisian, a former head coach at Washington and USC, will still call the offensive plays. Saban has led Alabama to five national titles since taking over the program in 2007, and also won one at LSU.

Saban wasn’t sure how game day will go when it comes to communication with his staff, but is confident he can still lead practices and run meetings from home via Zoom calls. He communicated with a team manager when he saw a mistake in practice and wanted a play repeated.

He plans to go through his usual Thursday routine, which includes watching the offense and defense practice, work on two-point plays, and will preside over meetings all from home.

“I didn’t leave the country or anything,” Saban said. “I’m just right down the street. And we have this technology, so it’s really unique.

“Now, I don’t have experience at that. But we’re going to do the best we can to keep everything as normal as possible.”

The Tide played at Mississippi last weekend, and Rebels coach Lane Kiffin said Wednesday his team had some positive tests. Saban said Alabama hasn’t “had any indication” of an outbreak within the team.

Saban said he and staffers — from coaches to secretaries — had done a good job of wearing masks around each other while in the football building. Asked about his No. 1 concern, Saban mentioned getting his players ready for the game, not his health.

“It’s a big game for them,” he said. “Our goal as coaches is always to get them in the best position they can be in to be able to have success, and we need to try to continue to do that. That would be the greatest concern that I have.

“I haven’t blocked anybody or tackled anybody, caught any passes, thrown any passes in a game in a long, long time, so it’s still going to be up to how the players are able to execute and it’s up to us to try to get them in the best position to do that.”

The news out of Tuscaloosa was a nother body blow for the SEC, which had postponed two games this week already: No. 10 Florida against defending national champion LSU and Missouri-Vanderbilt.

Alabama’s head trainer Jeff Allen and medical director Jimmy Robinson said in a joint statement that Saban and Byrne were the only initial positive tests.

“All individuals who are considered high risk contacts have been notified and will follow quarantine guidelines,” the statement said. “We will follow the SEC’s Return to Activity and Medical Guidance Task Force Protocol for testing asymptomatic positives.”

Byrne said he would “remain at home and follow all guidelines.”

“We’ve been diligent about mask wearing and social distancing from the start and want to continue to encourage you all to take the necessary precautions to help stop the spread of this virus for yourself and those around you,” the 48-year-old AD said.

“It’s the reality,” Pruitt said. “I don’t think there’s probably any family across our country that has not been affected during this pandemic.”